The Government’s new Constitution initiative which began in Parliament yesterday was dogged by late night meetings where parties including the “joint opposition” sought changes in procedure.

The highlight of these changes was to add a provision in the resolution to convert the House into a Constitutional Assembly. They wanted it changed to include a reference to a Select Committee of the entire House. Interesting enough, the Sri Lanka Freedom Party (SLFP) backed the move initiated by the leader of the “joint opposition” and Mahajana Eksath Peramuna (MEP) leader Dinesh Gunawardena. Also supporting the move was Janatha Vimukthi Peramuna (JVP) leader Anura Kumara Dissanayake. The Government is to now add to the original resolution the words; “have the powers of a committee of the whole House and” after the words “Constitutional Assembly.” The change will come at the next sittings of Parliament on January 12 when the amendments are taken up. 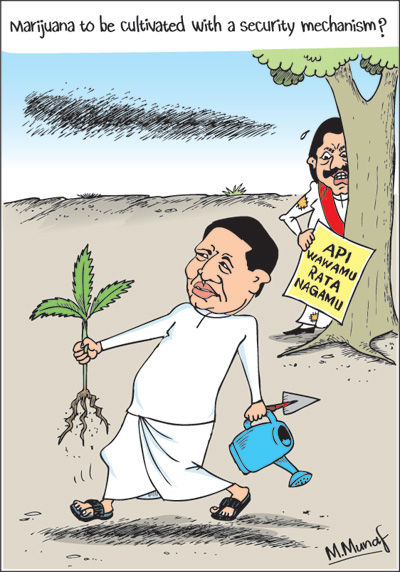 Yet, Prime Minister Ranil Wickremesinghe did move the resolution in its original form yesterday during proceedings telecast live countrywide. As far as the United National Party (UNP) is concerned, he asserted, they were quite happy with the existing resolution. However, he said several parties had made representations. Since he was keen to ensure all parties took part in the Constitution-making process, he said he would heed their views. He declared that there were amendments to be made. In fact, ahead of Parliament sittings yesterday, the Government’s own amendments were made available to these parties. The Premier said among those who had sought changes were MEP leader Dinesh Gunawardena, the JVP and even the SLFP. A meeting of party representatives with Speaker Karu Jayasuriya preceded yesterday’s House proceedings.

This meeting was to see an exchange of words between Premier Wickremesinghe and JVP leader Dissanayake. It began with Dissanayake pointing out that the Premier had remarked that he would place the guns on the necks (bellata thuwakkuwa thiyala) to get things done. Shot back Wickremesinghe, “I am for the Executive Presidency. I voted for it then and was flexible (namyasheeli) to ensure that people like JVP leader Dissanayake were in that system.”

On late Friday night, President Sirisena, during a meeting with Prime Minister Wickremesinghe, expressed the wish that the opposition’s requests for amendments be considered. The President had received reports of a campaign based on unfounded claims that provisions relating to Buddhism in the Constitution were to be changed. Some members of the Buddhist clergy staging a protest in Pettah yesterday, despite appeals to call it off, had also reportedly made such claims. Sirisena was of the view that the ‘opposition’ participation was salutary in many ways. Thereafter, they could not complain they were unaware of what had been decided upon for the draft Constitution. Moreover, a source close to the presidency said Sirisena was also very keen to ensure that the new Constitution is the product of deliberations by all parties represented in Parliament, besides other stakeholders including civil society. He wants the process concluded this year.

Gunawardena who heads the “joint opposition” told the Sunday Times yesterday, “The Government earlier agreed to our suggestion but later went back on it. Once again, it has agreed to our main request as well as others.” This move has effectively prevented a boycott of sittings of “a constitutional assembly” by the joint opposition – a situation which would have drawn accusations that the ruling party had together with the Tamil National Alliance (TNA) formulated a draft constitution without a section of Parliament, which held different views. A meeting had in fact, been planned by the opposition group for follow-up action but the acceptance of their proposals vitiated it. Now, they will take part in drafting a new Constitution.

The demand for changes to the resolution surfaced on Thursday morning when Speaker Jayasuriya chaired a meeting of representatives of political parties in Parliament. They met Premier Wickremesinghe in the evening and President Sirisena the same night. After they raised issue over amendments, it was agreed that they should forward the texts. The three point “joint opposition” text calling for amendments said:

We, the Members of Parliament (The Joint Opposition) move the following amendments to the resolution given notice to Parliament by the Government to enact a new constitution; 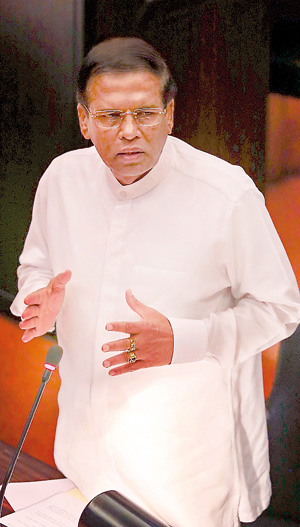 Party representatives met Speaker Jayasuriya at his official residence on Parliament Road on Thursday night. It was to consider “joint opposition” amendments and finalise the Government draft. Representing the Government side were Prime Minister Wickremesinghe, House Leader Lakshman Kiriella, Ravi Karunanayake, Ajith Perera and Malik Samarawickrema. Representing the SLFP were Ministers Duminda Dissanayake, Nimal Siripala de Silva, and Mahinda Samarasinghe whilst M.A. Sumanthiran represented the Tamil National Alliance (TNA). He had also submitted amendments. The TNA leader Rajavarothayam Sampanthan told the Sunday Times, “We are in favour of the Constitutional Assembly. That is a good thing.” The meeting was to see some very heated exchanges. An angry Premier Wickremesinghe was to point out that he was perhaps the only person now in Parliament who had supported the executive presidency. He said he had also voted for the proportional (manapa) representation system. “It is okay by me. You all must decide what you want,” he pointed out to those seeking amendments. The Government side insisted on no changes being made to its resolution, the highlights of which were exclusively revealed in these columns on November 22 last year. In what seemed a surprise development, Ministers Nimal Siripala de Silva and Mahinda Samarasinghe took up the position that amendments, particularly the one converting the House into a Select Committee, were necessary which was the position of the pro-Mahinda Rajapaksa joint opposition. Opposing the move was the TNA representative. As the night grew, a stalemate situation developed.

By Friday morning, the SLFP members were to meet to finalise their position together with the UNP representatives. Political parties that wanted the changes had another meeting with Speaker Jayasuriya in the morning. They learnt that Premier Wickremesinghe would be meeting President Sirisena on Friday night. This meeting had to be delayed since there was a pirith ceremony at his Paget Road residence to mark the President’s one year in office. As the meeting ended, political parties seeking changes were informed that there would be amendments by the Government too. They were based on suggestions made so far by the political parties which needed changes. They were also made available to those seeking the changes. Among these Government amendments are:

The deletion of the word “new” in the resolution which reads “WHEREAS there is a broad agreement among the People of Sri Lanka that it is necessary to enact a new Constitution for Sri Lanka.”

Deletion of the following paragraphs:
“AND WHEREAS the People have at the Presidential Election held on 08th January, 2015 given a clear mandate for establishing a political culture that respects the rule of law and strengthens democracy;

“AND WHEREAS His Excellency Maithripala Sirisena, President of the Democratic Socialist Republic of Sri Lanka has clearly expressed his desire to give effect to the will of the People expressed at the aforesaid Presidential Election by enacting a new Constitution that, inter alia, abolishing the Executive Presidency;

“AND WHEREAS it has become necessary to enact a new Constitution that, inter alia, abolishes the Executive Presidency, ensures a fair and representative Electoral System which eliminates preferential voting, strengthens the democratic rights of all citizens, provides a Constitutional Resolution of the national issue, promotes national reconciliation, establishes a political culture that respects the rule of law, guarantees to the People’s fundamental rights and freedom that assure human dignity and promotes responsible and accountable government.”

President Sirisena who addressed the House in a nationally telecast speech yesterday warned those opposed to the Government from carrying out disruptive activities through campaigns of disinformation. He said he was aware of attempts to cause unrest. He noted that there were extremist groups from all sides. The drafting of a new Constitution was to create a prosperous country. Some were claiming that we were dancing to the tunes of foreign countries and that some members of the Buddhist clergy would lose their place. He said these attempts were to create a “Viyawastha Billa” or a Constitution Monster. Such campaigns would only lead to tragedy and that will not be allowed, he cautioned.

He said it was unfortunate that the country had missed out several opportunities. If the Bandaranaike-Chelvanayakam and the Dudley Senanayake- Chelvanayakam pacts were allowed to be enforced, there would not have been a man named Velupillai Prabhakaran. There were lessons to learn from the violent incidents of 1958, 1971 and 1983 among others. Even the tsunami of 2004 would have been a good opportunity to develop the country. He lamented that the country had lost out on many opportunities. There were people in the South who dreaded the word “federal” whilst there were those in the North who equally dreaded the word “unitary.” The Government had qualified and capable people to formulate a Constitution. Therefore, all should strive to ensure it was adopted early.

With the conclusion of the President’s address, Speaker Jayasuriya adjourned Parliament. Hence, there was no debate as earlier expected. The pro-Mahinda Rajapaksa “joint opposition” insisted and had its way on having amendments to the Government’s resolution. Its MPs were also briefed on the constitution-making process. This was during an event at the Dr. N.M. Perera Memorial Centre in Borella. Talking to them were Prof. G.L. Peiris and President’s Counsel Manohara de Silva, among others.

President Sirisena who is marking his first year in office hinted at Wednesday’s weekly ministerial meeting that Government action against persons who had resorted to corrupt practices, bribery and other illegal actions would follow after mid-January. His response came when Finance Minister Ravi Karunanayake raised issue over the fate of a series of high profile investigations. He identified some of them. The issue came to the fore when ministers discussed a recommendation to extend the term of the Anti-Corruption Secretariat for six months – from January 1 to June 30. This secretariat, set up last year, received public complaints of corruption and related matters. After formal verification, the complaints were channelled to different state investigation arms for probe. This is in addition to the agencies concerned carrying out their own investigations.

With a year behind, both for President Sirisena and the Government, the agenda this year has many priorities. The arrests that the President has hinted will no doubt place opponents on the defensive when elections to local government institutions are held. With a greater leverage and a two thirds majority, a new Constitution within the one year time frame would no doubt be an achievement. Yet, one has to be mindful of the unexpected roadblocks, too.