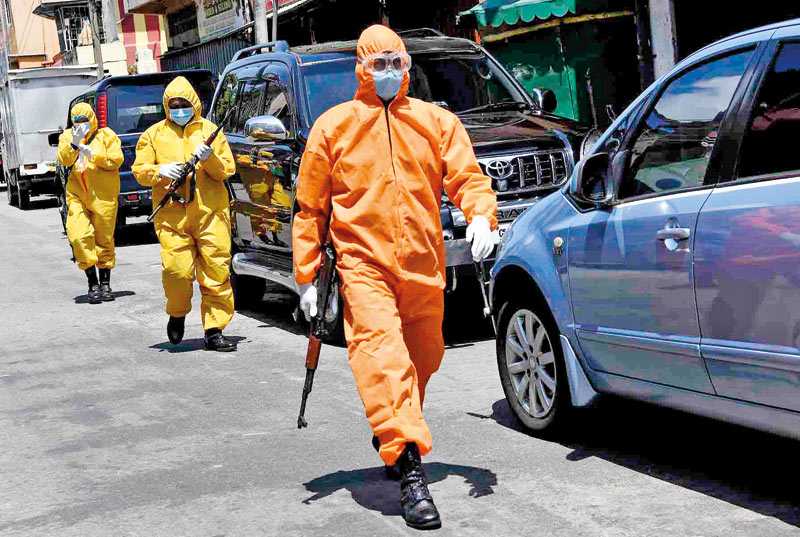 The phrase ‘new normal’ is commonly used to refer to the post-COVID-19 context, but even in this new normal there exists a permanent normal we cannot escape, i.e. State violence. State violence against persons thought to be a threat to the State, such as dissenters, human rights defenders, journalists and those arrested for drug offences, has been the permanent normal in Sri Lanka for decades.

I refer to it as the ‘permanent normal’ because deaths in custody and persons being killed in encounters with the police are not unique to a particular political regime, but instead are systemic.

For instance, in October 2016, during the Yahapalana regime, two Jaffna University students were killed when they reportedly failed to stop at a police checkpoint. The police initially denied responsibility and claimed that they had died due to an accident that was caused when they lost control of the motorbike because they were speeding while under the influence of alcohol. The post-mortem report however, discovered bullets lodged in the body of one of the victims and did not find any trace of alcohol in their blood. To date, no one has been held accountable for their deaths.

What is the connection between the new normal and the permanent normal? Conditions that existed in the permanent normal, but were largely ignored as they did not directly affect the majority of Sri Lankans, became entrenched and normalised, and have taken new and more menacing forms during the pandemic.

In the past, only certain groups were at threat of being subjected to extra-judicial killings, deaths in custody, surveillance or invasion of their privacy. For instance, it is human rights defenders, journalists and civil society organisations/NGOs, especially those in the north and east, that were subject to surveillance and harassment if they were thought to be engaged in activities critical of the State. Now, it is the general population that is being subject to the same forms of surveillance and invasion of privacy by the media and via drones.

While in the past only the aforementioned groups were demonised and criminalised, now those infected with COVID-19 too have joined the ranks of the criminalised and are being treated with no empathy.

For example, ‘A Protection Assessment of Sri Lankan Internally Displaced Persons who have Returned, Relocated or are Locally Integrating’ published by UNHCR in June 2013, states that at the time 100% respondents in Mannar, 99% in Kilinochchi, 95% in Mullaitivu 90% in Vavuniya said that the military had ‘registered’ their families.

Due to the war policing too was militarised. For decades, the Emergency Regulations empowered the military to arrest and detain persons and did not even require the police to accompany the military during such arrests. Further, the use by successive presidents, including the previous and current presidents, of Section 12 of the Public Security Ordinance to call out the military to maintain law and order, further militarised the maintenance of law and order. This was entrenched by placing the Police Department within the purview of the Ministry of Defence.

The precarious lives of the victims and the perpetrators

Persons considered expendable by the State can be subjected to State violence without repercussions. How are these expendable people created? The State through the politics of fear demonises and dehumanises certain populations to justify its violence against these groups. Villains are created and the existence of these villains is used to justify any State action to protect the public.

The villains are no longer only those accused of drug trafficking or those arrested under the Prevention of Terrorism Act, but include COVID-19 patients, and at one point the Muslim community, which was blamed for the spread of COVID-19.

Generally, persons that are demonised and dehumanised by the State tend to live lives of precarity, i.e. they are from socially and economically marginalised communities and lead an existence of poverty and violence, such as those who live in slums or those who are homeless and live on the streets.

The policemen who perpetrate violence on behalf of the State also live precarious lives; they earn meagre salaries, work extremely long hours in appalling conditions, are under threat of violence, and now during the pandemic are at high risk of exposure to the virus. Surprisingly, or perhaps not surprisingly, the findings on these issues set out in the 1947 Report of the Police Commission, which was established to make recommendations on improving the Police force, are still relevant.

Even in 2017 when Minister Sagala Ratnayake visited the quarters at the Cinnamon Gardens Police Station he is reported to have found that ‘none of the washrooms were equipped with working showers or water connections’…and the only bathing option for 550 policemen was ‘a water tank behind the building’.

Where working hours are concerned, the Police Commission Report states that ‘not infrequently, a man who has been on duty all night has to attend the Courts the next morning and has to be in attendance there, perhaps, the whole of that day’. One can only imagine the plight of the women police officers within such a system.

Within such a system, even the policeman who perpetrates violence on behalf of the State may have been subjected to discrimination and structural violence, as evidenced by complaints we received from policemen while I was a member at the Human Rights Commission of Sri Lanka. Hence, it is not only the victims of State violence that live precarious lives but many alleged perpetrators as well. The precarity of both these groups benefits the exploitative system, which ultimately serves the agendas of those in power.

The culture of policing

Globally, not only in Sri Lanka, the culture of policing has evolved into one predicated on a culture of violence which robs individuals of their dignity and relies on the use of force to maintain power and ensure obedience/compliance. This is found in every aspect of the system, even in the language used, for example, the intemperate and abusive language senior officials use when addressing their subordinates, which extends to the way the system treats the citizens that come into contact with it.

The lack of regard for those it is supposed to serve was highlighted in the 1947 Report of the Police Commission, which referring to the state of police stations points out that, ‘No thought appears to have been taken for the comfort or convenience of the public…The impression created is that the Police attitude is that members of the public should be quite content that they are even allowed to come into these sacred precincts.’

The extent to which impunity is entrenched in the system is illustrated by the 1947 Report of the Police Commission, which states the Commission came across ‘an instance in which the Inspector-General himself had strongly recommended for promotion over more senior officers an Assistant Superintendent of Police, who, in the opinion of the Supreme Court, had committed perjury in the course of giving evidence in the Matara Police Station killing case.’

The Commission further states that ‘the refusal or failure to entertain and investigate such complaints satisfactorily’ by the State ‘has, to a great extent, shaken the confidence of the public’. Inequality, discrimination and violence are therefore embedded within structures and institutions, such as the Police Department.

The deep-rooted impunity is evident in the failure to provide even marginally credible explanations for cases of deaths in custody. For instance, the Supreme Court in its decision in the case of custodial death in Ratnayake Tharanga Lakmali v Niroshan Abeykoon, inquires why the police, knowing the deceased ‘was a person from the underworld and was involved in contract killings,’ after keeping him in under special custody and transporting him previously under heavy guard, took him out ‘at night without handcuffs with only three officers and the driver in a faulty van without a door’.

Let’s apply the Supreme Court’s questions to the series of events that led to the death of Makandure Madush. According to the statements of the police that were reported in the media, Madush was instructed by the police to contact fellow gang members and it was known to these persons that Madush would be visiting the location, reportedly to retrieve 22 kgs of heroin.

Since it was public knowledge that Madush was in police custody, it is quite certain that the gang members would have expected the police to accompany Madush. In such a context it would be expected the police would come under attack. Yet, when Madush was taken in the middle of the night to a place that was frequented by drug gangs, it doesn’t appear required precautions were taken.

This is despite Section 8 (b) of the Police Department Standing Order stating that a ‘sufficiently strong escort’ should accompany a person ‘who is likely to escape or become violent,’ and Section 8 (i) reiterating that a person in custody should be taken out of the police station for further inquiry only if there is ‘an escort sufficient to ensure his safe custody’.

These incidents illustrate that State structures disregard the basic principle that ‘even persons whose records are not particularly meritorious’ should irrespective of such records enjoy the constitutional guarantee of personal liberty, which has been elucidated by the Supreme Court of Sri Lanka in many decisions, such as Senthilnayagam v Seneviratne. This includes the right, as stated in Amal Sudath Silva v Kodituwakku, of even ‘notorious’ or ‘hard core’ criminals not to be subjected to torture, inhuman or degrading treatment or punishment.

How do we (re) imagine security?

What’s the connection between the State response to COVID-19 and the death of Makandure Madush? The connection lies in the nature of the State, which is inherently violent and appears to have little regard for the human rights of its citizens. It does not view people as citizens but as subjects.

When the State is at a loss as to how to deal with the messy and complex business of governance it turns to militarised, repressive means to deal with a conflict or crisis. The demonisation and dehumanisation of COVID-19 patients, and the use of drones to monitor curfew areas and arrest curfew violators is an extension of the State’s militarised response to minorities, dissenters and human rights defenders in the past. The difference is that now those means are being employed against the general populace and not a specific group.

There are calls for reform, i.e. to re-imagine and restructure the State, policing, and public institutions, but what should be done if the fundamental values upon which these structures and institutions are founded have become rotten, or maybe always were? In such a context, we need to imagine afresh what safety and security mean. We must imagine afresh how we achieve safety and security in the context of the Government’s conceptualisation of national security, which is based on the principle of domination over groups posing a challenge to the State; groups that the State seeks to annihilate or control.