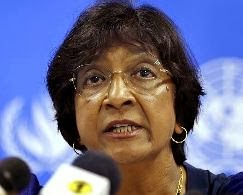 Promoting reconciliation and accountability in Sri Lanka
Report of the Office of the United Nations High Commissioner for Human Rights*
Summary
In the present report, the Office of the United Nations High Commissioner for Human Rights acknowledges the progress made in reconstruction and the implementation of some of the recommendations made by the Lessons Learnt and Reconciliation Commission. The Government of Sri Lanka has, however, failed to ensure independent and credible investigations into past violations of international human rights and humanitarian law. The report also contains updates on the ongoing attacks on religious minorities, and the harassment and intimidation of human rights defenders, lawyers and journalists.
The Government has not responded to the offers of technical assistance made by the High Commissioner and the special procedures. Meanwhile, new evidence continues to emerge on the events that took place in the final stages of the armed conflict. Against this background, the High Commissioner recommends the establishment of an independent, international inquiry mechanism, which would contribute to establishing the truth where domestic inquiry mechanisms have failed.

A.     Conclusions
65. Despite the significant progress achieved in the physical aspects of resettlement and recovery, and the implementation of some of the recommendations made by the Lessons Learnt and Reconciliation Commission, the Government of Sri Lanka has yet to satisfy the call made by the Human Rights Council for a credible and independent investigation into the allegations of serious human rights violations that persist or to take the necessary steps to fulfil its legal obligations to ensure justice and redress.
66. It is important for the Human Rights Council to recall the magnitude and gravity of the violations alleged to have been committed by the Government and the LTTE, which left many thousands of civilians killed, injured or missing. In its report, the Secretary-General’s Panel of Experts concluded that, if proven, some of these acts would amount to war crimes and crimes against humanity. During her visit to Sri Lanka in August 2013, the High Commissioner was struck by the overwhelming sense of grief and trauma among victims and survivors that, if left unaddressed, will continue to undermine confidence in the State and reconciliation.
67. The Government has launched initiatives and established mechanisms, such as the military courts of inquiry and the Commission of Inquiry on Disappearances, but none of these have the independence to be effective or to inspire confidence among victims and witnesses. The military courts of inquiry lack independence and transparency and are limited in scope. Past commissions of inquiry have not always completed their mandate, their reports have not been published and their recommendations have not been implemented or followed by prosecutions. The Human Rights Commission of Sri Lanka, although handling many routine cases, has a poor record in responding credibly to serious violations committed by the military and security forces.[1]
68. For the past several years, Sri Lankan courts have been compromised by politicization and interference by the executive.[2]Cases or presiding magistrates and judges are often transferred from one court to other, thereby delaying judicial proceedings.[3] The High Commissioner heard from lawyers about large numbers of fundamental rights applications, including in cases of arbitrary detention and torture, that are discouraged or not given leave to proceed by the Supreme Court.[4]
69. One consequence of this situation is the understandable reluctance of victims and witnesses to come forward in the absence of any effective system for their protection. In many cases, witnesses have been intimidated to discourage their giving testimony, and even killed. This has been a major constraint on criminal investigations, as well as on the work of previous commissions of inquiry and the Lessons Learnt and Reconciliation Commission. The Attorney-General himself informed the High Commissioner that the reluctance of witnesses to come forward was the main reason for the lack of progress in such emblematic cases as the ones concerning Trincomalee and Action contre la Faim.
70. A bill on assistance and protection for victims of crime has been in preparation since 2007, and was tabled in Parliament in June 2008. The previous drafts contained many provisions that were not compliant with international human rights law. Although the Supreme Court recommended several amendments, it is not clear whether they were incorporated. According to the Government, the legislation is being finalized, even though the final version has yet to be released for public consultation.
71. At the same time, new evidence — including witness testimony, video and photographic material — continues to emerge on the events that took place in the final stages of the armed conflict. Human remains are also still being discovered, for instance in Matale, in November 2012, and Mannar, in December 2013.
72. As the emblematic cases highlighted above show, national mechanisms have consistently failed to establish the truth and achieve justice. The High Commissioner believes this can no longer be explained as a function of time or technical capacity, but that it is fundamentally a question of political will. The Secretary-General’s Panel of Experts and the initiatives taken by international non-governmental organizations have shown that witnesses are willing to come forward to testify to international inquiry mechanisms that they trust and can guarantee their protection. For this reason, the High Commissioner remains convinced that an independent, international inquiry would play a positive role in eliciting new information and establishing the truth where domestic inquiry mechanisms have failed. In the absence of a credible national process, she believes the international community has a duty to take further steps, which will advance the right to truth for all in Sri Lanka and create further opportunities for justice, accountability and redress.
73. The High Commissioner reiterates her concern at the continuing trend of attacks on freedom of expression, peaceful assembly and association, particularly against human rights defenders, journalists and families of victims, the rising levels of religious intolerance, and continued militarization, which continue to undermine the environment where accountability and reconciliation can be achieved. She therefore reiterates and updates the recommendations made in her previous report to the Human Rights Council, most of which remain unimplemented.
Recommendations
74. The High Commissioner recommends that the Human Rights Council establish an international inquiry mechanism to further investigate the alleged violations of international human rights and humanitarian law and monitor any domestic accountability processes. OHCHR stands ready to assist in such a process.
75. The High Commissioner recommends that the Government of Sri Lanka:

(a)        Finalize laws dealing with incitement to hatred, witness and victim protection, the right to information and the criminalization of enforced disappearances, and revise existing laws in accordance with international standards;
(b)     Repeal the Prevention of Terrorism Act and lift the regulations promulgated under it that allow for arbitrary detention;
(c)      Arrest, prosecute and punish perpetrators of attacks on minority communities, media and human rights defenders, and ensure protection of victims;
(d)     Undertake independent and credible criminal and forensic investigations with international assistance into all alleged violations of human rights and humanitarian law, including recently discovered mass graves;
(e)      Establish a truth-seeking mechanism and national reparations policy in accordance with international standards as an integral part of a more comprehensive and inclusive approach to transitional justice;
(f)      Broaden the scope and tenure of the Commission of Inquiry on Disappearances to encompass cases from all parts of the island and all periods of the history of disappearances;
(g)     Publish the final report of the military courts of inquiry, the presidential commission of inquiry of 2006 and the more recent commissions of inquiry to allow the evidence gathered to be evaluated;
(h)     Take further steps in demilitarization, ensure military disengagement from activities that are meant to be civilian, resolve land disputes and promote meaningful community participation in reconstruction and development;
(i)      Engage civil society and minority community representatives more fully in an inclusive and consultative process to support the implementation of the recommendations made by the Lessons Learnt and Reconciliation Commission;
(j)      Implement the Commission’s recommendation for a national day of commemoration, allow all citizens their right to hold individual or group commemorations, and hold national consultations on the design of appropriate memorialization for the victims of the war;
(k)     Give positive consideration to the offers of technical assistance made by the Office of the High Commissioner;
(l)      Invite special procedures mandate holders with outstanding requests to visit the country in 2014, particularly the Working Group on Enforced or Involuntary Disappearances and the Independent Expert on minority issues.

[1]   For example, the attack on the Vavuniya prisoners and subsequent custodial deaths, in June 2012; the prison riot and subsequent custodial deaths in Welikada prison, in November 2012; and excessive use of force and subsequent deaths in Weliweriya, in August 2013.
[2]  In her oral update to the Human Rights Council (A/HRC/24/CRP.3/Rev.1), the High Commissioner highlighted concerns about the degree to which the rule of law and independence of the judiciary had been undermined in Sri Lanka, notably by the 18th amendment and controversial impeachment of the 43rd Chief Justice in January 2013. The 18th amendment abolished the Constitutional Council, which once recommended appointments to the independent bodies, such as the Elections Commission, the Police Commission and the Human Rights Commission.
[3]  As seen, for example, in the transfer of the magistrate overseeing the case of the Matale mass graves.
[4]   For example, the Fundamental Rights application (SCFR115/2011) submitted by the parents of Ganeshan Nimalaruban, who died in custody following the attack on the prisoners in Vavuniya in June 2012.