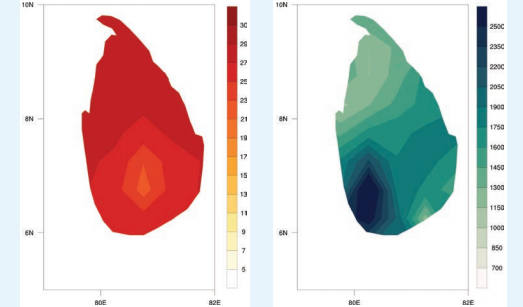 Sri Lanka is a small island nation lying between 6°N and 10°N latitude and 80°E and 82°E longitude in the Indian Ocean, with a land area of approximately 65,000 square kilometers (km2). The island consists of a mountainous area in the south-central region and a surrounding coastal plain. The climate of Sri Lanka is wet and warm, ideal for forest growth; almost all of the nation’s land area was at one time covered with forests. Over the last century, more than two-thirds of this forest cover, rich in biodiversity, has been removed to accommodate human use. Nonetheless, rich natural resources remain and, alongside its vibrant cultures, contribute to the nation’s successful tourism industry.

The economy of Sri Lanka is dominated by the service sector (61.7% of Gross Domestic Product [GDP] as of 2017), with major contributions from trade, transportation, and real estate activities. While the agricultural sector has shrunk in its contribution to GDP (7.8% as of 2017), it remains a significant employer (27% of the labor force as of 2016). Approximately a quarter of Sri Lanka’s population are believed to live within the metropolitan area of its commercial capital, Colombo. However, official statistics suggest Sri Lanka’s urban population is relatively low, reportedly 19.3% in 2016. As shown in Table 1, a large proportion of Sri Lanka’s population remains undernourished (22.1% in 2014–2016).

Sri Lanka’s high temperatures, unique and complex hydrological regime, and exposure to extreme climate events make it highly vulnerable to climate change. In 2012, the Ministry of Environment submitted its Second National Communication to the UNFCCC (NC2), which highlights key vulnerabilities in the agriculture and water resources sectors, as well as significant risks to human health and in coastal zones. These key climate-related risks were again emphasized in Sri Lanka’s Nationally Determined Contribution (NDC) submitted after it signed and ratified the Paris Climate Agreement in 2016. Sri Lanka’s NDC outlines the country’s commitment to addressing its vulnerability to climate change in line with its commitments to a low carbon pathway through sustainable development efforts.

This document aims to succinctly summarize the climate risks faced by Sri Lanka. This includes rapid onset and long-term changes in key climate parameters, as well as impacts of these changes on communities, livelihoods, and economies, many of which are already underway. This is a high-level synthesis of existing research and analyses, focusing on the geographic domain of Sri Lanka, therefore, potentially excluding some international influences and localized impacts. The core data is sourced from the database sitting behind the World Bank Group’s Climate Change Knowledge Portal (CCKP), incorporating climate projections from the Coupled Model Inter-comparison Project Phase 5 (CMIP5). This document is primarily meant for WBG and ADB staff to inform their climate actions and to direct them to many useful sources of secondary data and research.

Due to a combination of political, geographic, and social factors, Sri Lanka is recognized as vulnerable to climate change impacts, ranked 100th out of 181 countries in the 2017 ND-GAIN Index. The ND-GAIN Index ranks 181 countries using a score which calculates a country’s vulnerability to climate change and other global challenges as well as their readiness to improve resilience. The more vulnerable a country is, the lower their score, while the more ready a country is to improve its resilience, the higher it will be. Norway has the highest score and is ranked 1st. Figure 1 is a time-series plot of the ND-GAIN Index showing Sri Lanka’s progress.