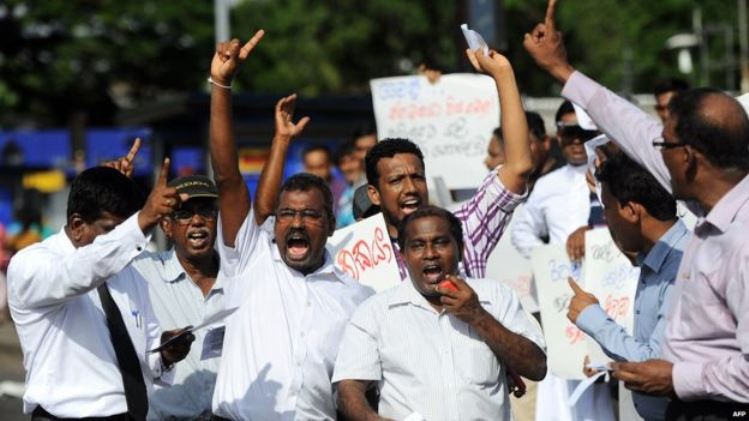 President Maithripala Sirisena and Prime Minister Ranil Wickremesinghe have agreed to resolve the existing “practical difficulties” that hinder the smooth and fast progress of ongoing investigations into large scale corruption, fraud and bribery allegations, when they met a group of civil society representatives at a closed door meeting yesterday.

A group of 17 civil society leaders called on the President and the Prime Minister at the Presidential Secretariat to raise their concerns on several key issues cropped up recently.

Speaking to the Daily News on the outcome of the meeting, ‘Puravesi Balaya’ Co-convener Gamini Viyangoda said the President and Prime Minister agreed to resolve the existing “practical difficulties” that hinder the smooth and fast progress of the investigations.

He added the civil society members also raised the issue of political interferences into the investigations and legal process.

“We stressed them to let the rule of law take its own course,” he remarked.

He further said civil society representatives pointed out to the President and Prime Minister that the name ‘Financial Crimes Investigation Division’ (FCID) should not be changed at this point as the people have identified the FCID with the anti-corruption drive.

“The name-change might give the impression that the process that has begun would be stopped. They agreed to consider our opinion,” he said.

Viyangoda further said civil society members pointed out that the comments of some ministers were very damaging to the unity government and those must be stopped immediately.

“We pointed out that ministers cannot make statements as of their whims and fancies. The President agreeing to this view said that he had already warned certain SLFP Ministers not to make such comments hereafter,” he said.

The re-appointment of Central Bank Governor Arjuna Mahendran which has been a hot topic was raised by the civil society members during the meeting expressing their stiff opposition for his service extension after June 30.

“All the 17 of us said in very clear terms that we are against his re-appointment. Prime Minister Wickremesinghe said both the President and himself would discuss and reach a final decision on it.

“Beyond that the Prime Minister made no comment and the President also did not elaborate on it,” he said.

“The Prime Minister left in between the meeting stating that he has another appointment. Even after he left the meeting, it continued for about another 45 minutes with the President. Given the way he spoke, we have confidence that the President would not re-appoint Mahendran,” he revealed.

Thennakoon said the public seminar on June 21 and the protest on June 23 against the re-appointment of Mahendran organised by civil society organisations have not been called off and that those would be continued as scheduled.

Thennakoon said the President and Prime Minister were on the same page with regard to the ongoing investigations.

“They admitted there had been delays particularly due to legal issues, certain issues at the Attorney General’s Department and lack of physical and human resources at investigative bodies.

“They agreed to rectify them as soon as possible, but, pointed out that everything cannot be resolved overnight,” he said.

“Both the President and Prime Minister attentively listened to all our complaints and opinions and reacted to them positively,” he said.