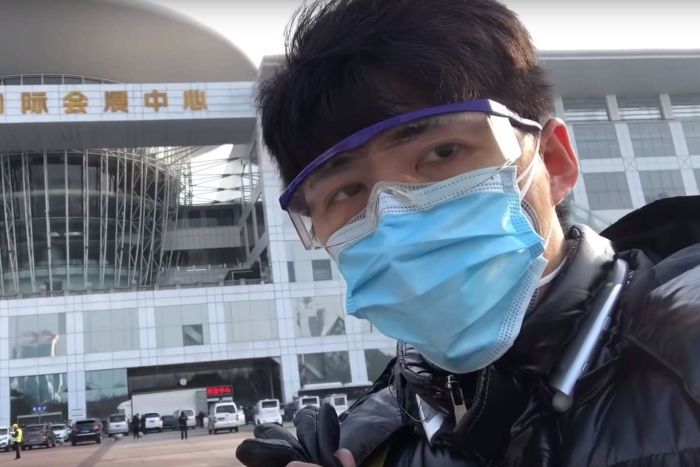 PHOTO: Mr Chen has been publicly critical of the Chinese Government over human rights abuses and media suppression. (Supplied)

A citizen journalist who has been critically reporting on Beijing’s handling of the coronavirus crisis from the city of Wuhan has been missing for almost a week, according to his family.

Key points:
Chen Qiushi reported many hospitals in Wuhan lacked adequate resources
A ghostwriter for Mr Chen posted a video of his mother pleading for help on Twitter
Chinese law states anyone who spreads “false information” could be given a prison sentence

Chinese human rights lawyer Chen Qiushi, 34, who has been missing since last Thursday, had been posting regular updates about conditions inside the coronavirus epicentre on social media since January 24.

Mr Chen arrived in Wuhan on the last train just before the city went into lockdown, and his reporting has been seen as defying the Chinese Communist Party’s tight grip on information around the outbreak.

“How can you call yourself a reporter if you dare not to go to the frontline at the earliest possible time when there is a disaster,” he said in a video on his YouTube channel after arriving in Wuhan.

The news of his disappearance came on the same day as the death of whistleblower doctor Li Wenliang, who tried to warn people about coronavirus before he was arrested by local authorities.

Dr Li’s death sparked anger and grief across China and generated 1 billion comments on Chinese social media platform Weibo by Friday morning (local time) before the number of comments more than halved to just 450 million in the afternoon, in what many believe is due to Chinese Government censorship.

Mr Chen, who has more than 260,000 followers on Twitter, reported that many hospitals in Wuhan lacked protective clothing, glasses, hand sanitisers and disinfectants, and that surrounding cities were even less prepared.

He also interviewed people who were trapped in Wuhan during the outbreak.

Following Mr Chen’s disappearance, a video from his mother was posted on his Twitter account last Thursday, pleading for help in the search for her son.

Mr Chen’s mother appealed to social media in the hopes of finding her son. (Supplied: YouTube)

“This evening he said he was going to [a temporary hospital], but we have lost communication since about 7:00pm or 8:00pm tonight,” she said, after introducing herself as Mr Chen’s mother.

“I am asking Chinese netizens, particularly in Wuhan, for a favour. I’m trying to find Qiushi and find out what happened to my son.”

“I gave my overseas friends all the passwords to my social media accounts … and if I don’t contact them for 12 hours they will change the passwords,” read the post, which was seemingly pre-written by Mr Chen and posted by an friend.

“If I get arrested they could force me to delete all my videos on YouTube and Twitter.”

Mr Chen has been publicly critical of the Chinese Government over human rights abuses and media suppression.

Last year he live streamed protests to Chinese audiences from Hong Kong to his more than 1 million followers on Chinese social media Weibo and video-sharing app Douyin. His accounts were banned not long after.

Speaking to the ABC before his disappearance, Mr Chen said people in Wuhan had been concerned about the Chinese Government’s handling of the crisis.

“Some medical staff complained that the Government failed to make timely public notice for the meeting of the National People’s Congress, which caused the closure of the city in a hurry,” he said.

Last month, WeChat sent a message reminding its users of China’s “false information” laws, warning against the spread of misinformation and “seriously disrupting the social order”, which could carry a sentence of up to seven years of prison.

The ABC has contacted WeChat but did not receive a response by the time of publication.