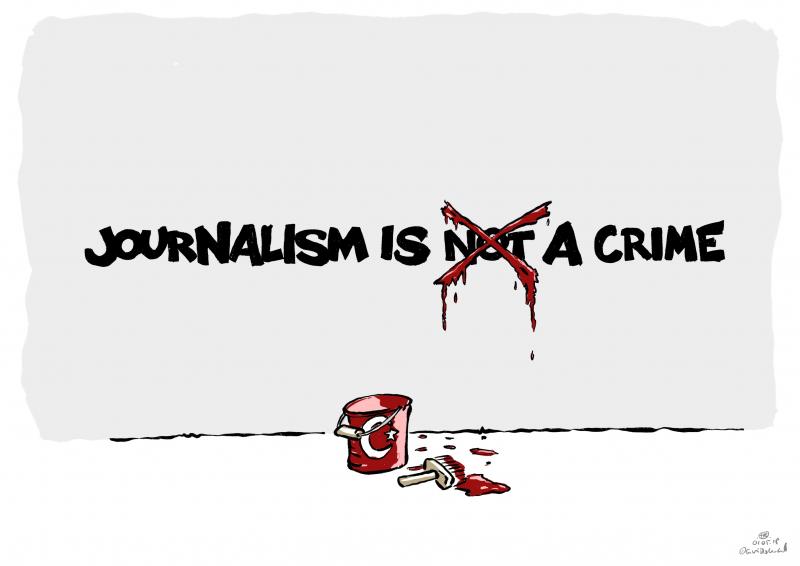 November 2 is the International Day to End Impunity for Crimes against Journalists. According to the Committee to Protect Journalists (CPJ) in 2020 at least 22 journalists were murdered in retaliation for their work, more than double the total for 2019. CPJ states that 2021 numbers it has tracked is close to 2020 but that the political volatility in Afghanistan and other high risk nations makes the final 2021 total difficult to predict. It also points out that no one has been held to account in 81% of journalist murders during the last 10 years.

Today the Permanent People’s Tribunal in The Hague will commence hearings into murder of journalists based on an indictment presented by a coalition of press freedom organizations – Free Press Unlimited, the Committee to Protect Journalists and Reporters Without Borders. The opening hearings are today with separate hearings early next year on three significant cases. The concluding hearing will be held on May 3 next year, World Press Freedom Day. The hearings will deal with indictments against governments of Mexico, Syria and Sri Lanka, for the murder of journalists Miguel Ángel López Velasco, Nabil Al-Sharbaji and Lasantha Wickrematunge. The hearings into Lasantha’s murder will be held on January 12 and 13. The charges against the Sri Lankan state are for violations of the right to life, right to freedom of expression and right to a remedy.

The hearings follow other international initiatives to seek justice for Lasantha’s murder in January 2009, including the filing of a case in the United States in 2019 and a complaint to the UN Human Rights Committee in 2021, come in context of lack of justice in Sri Lanka for over a decade and have been spearheaded by Lasantha’s daughter, Ahimsa Wickrematunge.

Many journalists have been killed, abducted or have disappeared since the 1980s in Sri Lanka, with 2005-2010 being the most dangerous. According to Journalists for Democracy in Sri Lanka (JDS) 44 journalists and media workers were killed or disappeared during this period. Many have been arrested, detained, assaulted, threatened, intimidated and harassed over the decades, including this year. Media institutions have been subjected to arson and legal actions with the Sunday Leader, the English paper Lasantha founded and edited and the Uthayan, the most popular Tamil newspaper in the war-ravaged North being among the worst affected.

Media freedom organizations, journalists’ unions, rights activists and others in Sri Lanka, along with their international allies, have continuously campaigned for justice. But investigations and arrests into murder, enforced disappearances and other crimes against journalists have been rare. Most cases are not properly investigated or initial police inquiries and reports to magistrates often die a natural death with the passage of time.

A disproportionately large number of serious crimes against journalists have been against Tamil journalists in the war affected North and East and attention to these have been relatively less. Even the minimum progress in investigations and prosecutions seen under the previous government in some high profile cases that happened in Colombo was absent in cases involving Tamil journalists. The indictment on Lasantha’s case at the International People’s Tribunal notes that his murder was part of systematic attacks on journalists during the civil war.

According to the Free Media Movement, not a single person has been convicted for crimes against journalists and only two cases have reached the prosecution stage. One of them has come to a grinding halt.

Impunity has served as a license for continuing crimes and violence against journalists, including arrests and detentions, assaults, threats, intimidations and restricting access. Journalists continue to flee the country and subject themselves to self-censorship.

Last year on the International Day to End Impunity for Crimes against Journalists Vikalpa, a local website, featured eight journalists killed, disappeared and assaulted with no accountability for 3,995 days to 7,319 days, the longest impunity being for Mylvaganam Nimalarajan, murdered in Jaffna in October 2000. After more than 20 years, in March this year, the media reported that the Attorney General has instructed the courts not to continue the case against the arrested suspects.

According to the Free Media Movement, not a single person has been convicted for crimes against journalists and only two cases have reached the prosecution stage. One of them has come to a grinding halt.

The other is the case of the disappearance of journalist and cartoonist Prageeth Ekneligoda in January 2010, which has seen the most progress in terms of seeking accountability for a serious crime against a journalist. For about five years, there was hardly any progress. Then, after a change of government in 2015, investigations by the Criminal Investigations Department of the Police made progress and were recorded in Magistrate Courts despite obstructions and lack of cooperation from the Army. In a historic and rare step in crimes against journalists, in November 2019, the Attorney General filed indictments against nine Army personnel who had been previously arrested and released on bail. However, prospects for justice in this lone case also looks bleak now. The indictments coincided with the return to power of the ruling family under which the disappearance occurred, who pledged not to prosecute war heroes (i.e. military personnel). A top investigator went into exile and his chief overseeing the investigations has been arrested and detained. Many of hearings scheduled for 2020-201 have been postponed citing COVID-19.

The driving force behind the case’s progression to the stage of prosecution is Prageeth’s wife, Sandya Ekneligoda. For nearly 12 years, she has pursued justice with extraordinary determination and exceptional courage braving death threats, defamation and harassment while raising two children who had lost their father. She has filed numerous complaints, court cases, attended hundreds of court hearings, organized and joined countless protests, vigils and marches, met with politicians, engaged with the Attorney General and Army Commander, diplomats and UN officials, journalists and lawyers. She pursued justice through local courts when she was threatened in court premises, refused mediation and appealed to the Supreme Court when the monk convicted of threatening her was given a presidential pardon. A local journalist has estimated she has travelled at least 411,220 km in pursuit of justice.

That Sandya’s decade long work in ensuring Prageeth’s case reached trial is an example to reflect and learn from for those who want to challenge impunity. Areas that may deserve greater effort include diligent documentation of progress or lack of progress in relation to individual cases as well as overall trends; systematic and comprehensive monitoring of legal processes inside courtrooms, ensuring quality and consistent legal representation for aggrieved parties; and other forms of direct legal interventions and principled engagement with relevant bodies such as the police and the Attorney General’s Department. There must also be monitoring and documentation of social, cultural and political developments. International support should be sought when helpful to advance accountability; this should be particularly important as the hearings in Lasantha’s case in January next year at the International People’s Tribunal. Greater attention should also be paid to support survivors and the families of victims, especially those challenging impunity locally and internationally such as Sandya Ekneligoda and Ahimsa Wickrematunge.

One of the recent developments that promotes impunity for serious crimes against journalists is the appointment of a Presidential Commission of Inquiry in January 2020 to look into allegations of political victimization under the previous government (2015–2019). According to a study by the Centre for Policy Alternatives (CPA), one of the first things the Commission had done was to instruct the Attorney General’s Department to halt investigations and prosecutions in courts in relation to cases the Commission was probing including the disappearance of Prageeth Ekneligoda. A key prosecution witness in the Ekneligoda case defied a court order and appeared before the Commission, where he said his previous testimony had been under duress. The CPA report said that in its final report presented to the President in December 2020 and tabled in parliament in March 2021, the Commission recommended the withdrawal of charges against a senior police officer accused of concealing evidence in Lasantha’s murder and some of the accused on whom indictments have been served in the ongoing court case on the Ekneligoda disappearance. Similar recommendations have been made in relation to those who have been implicated in abduction and torture of journalist Keith Noyhar.

The Commission has also recommended the offering of a foreign service post to the 1st accused in the High Court trial in the Ekneligoda case. In all the above cases, the Commission has recommended actions against police officers who had investigated the cases and uncovered evidence about the involvement of police and military. Overall, the approach of the Commission has been to frame investigations and prosecutions against grave crimes (including against journalists) implicating politicians and military as political victimization. CPA has also indicated that in April 2021, Prime Minister Mahinda Rajapaksa had tabled a resolution in Parliament for the implementation of the recommendations of the Commission, seeking the dismissal of several cases pending before courts and the initiation of criminal prosecution of police officers, lawyers, officers of the Attorney General’s Department, witnesses and others involved in the cases mentioned in the Commission report. The cases include the murder of Lasantha Wickrematunge, the disappearance of Prageeth Ekneligoda and the abduction of Keith Noyahr.

In yet another significant move, Sandya Ekneligoda has filed a fundamental rights petition in the Supreme Court seeking an order to quash the findings and recommendations of the Commission of Inquiry to release army intelligence officers from the journalist Ekneligoda case.

Overall, successive governments have failed to ensure accountability for very serious crimes against journalists and there is no sign this will change. The 20th amendment to the constitution last year providing the President with absolute discretion in appointing the Attorney General and judges to higher courts further compromises accountability.

Now more than ever journalists, media freedom organizations, journalists’ unions and media agencies that employ journalists and media workers, bodies such as the editors’ guild and broadcasters’ guild must be more creative, consistent and comprehensive in their approaches to challenge entrenched and systematic impunity for crimes against journalists and, indeed, impunity for all crimes.