Can Prince Zeid be labelled a Tiger? 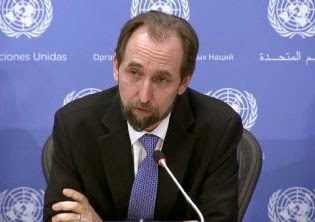 Upul Joseph  Fernanda
President Mahinda Rajapaksa visited Jordan on a special official tour early this year. He was not seeking the support of Jordan to vote in favour of Sri Lanka at the UN Human Rights Council (UNHRC), where a resolution was passed against Sri Lanka in March as Jordan was not among the voting States of the UNHRC this year.
However, now we have an inkling about the President’s sudden tour. It is revealed that the reason may be the President wanted to meet Prince Zeid Al-Hussein of Jordan, who is to replace Navanethem Pillay as the UN High Commissioner for Human Rights,

after the latter’s retirement. President Rajapaksa was using his Medamulana diplomacy to build up a connection with Al-Hussein through his Jordan tour.

In 2012, Jordan abstained from voting at the US-sponsored resolution against Sri Lanka. However, Sri Lanka’s expectation was that Jordan would vote in favour of Sri Lanka. It is said that Prince Al-Hussein was behind Jordan’s decision to abstain.

Although, it is thought that a diplomat from a Middle Eastern country becoming the UN High Commissioner for Human Rights may be advantageous to Asian countries such as Sri Lanka, it is not so. This excerpt from Inner-City Press shows how Prince Al-Hussein marked his protest against the appointment of Sri Lanka’s Permanent Representative to the UN, Major General Shavendra Silva, to the UN’s Senior Advisory Group on Peacekeeping Operations.

“On another note, Inner City Press was impressed by Prince Zeid’s positions not only on sexual abuse by UN peacekeepers, but also on Sri Lanka military figure Shavendra Silva being on the UN’s Senior Advisory Group on Peacekeeping Operations.
While other permanent representatives from South Asia, who initially told Inner City Press, they were opposed to Silva’s participation later under pressure recanted, Zeid never did. But the policies, at least in the Security Council, would be coming from Amman.”

Funds already allocated
The Government of Sri Lanka has been hoping that Pillay would fail to allocate funds to conduct an international investigation against Sri Lanka before her retirement becomes effective in August. However, to the much disappointment of Sri Lanka, Pillay has already made sure that funds are guaranteed for an investigation against Sri Lanka.
However, Al-Hussein is aware that it is going to be difficult to carry out an investigation, even though there are funds, without the support of Sri Lanka. Following excerpt from the Hindustan Times shows the cleverness of Al-Hussein:
“Zeid, highly-respected among diplomats, becomes the fifth declared candidate to succeed Ghana’s Kofi Annan, who completes his second five-year term at the end of the year.

He has also consistently challenged the United Nations to live up to its founding ideals as a servant of all the world’s peoples, and the instrument of its member States in advancing development, peace and security.
In 1997, as Jordan’s Deputy UN Representative, he was the first and only official in the General Assembly to demand publicly a complete UN report on the Srebrenica massacre, Europe’s worst atrocity since 1945.
The following year, he led a campaign among member States to this effect, which culminated in a call by the General Assembly for a definitive account.

The Secretary-General responded by producing a report widely considered to have been groundbreaking both in its honesty and in its thoroughness.

Zeid, an expert in international justice, played a central role in establishing the International Criminal Court.
As a political affairs officer for UN peacekeepers in Bosnia, he wrote, at Annan’s request, an explosive report in 2005 on sexual abuse in UN peacekeeping operations.

In September 2002, Prince Zeid was elected the first President of the governing body of the International Criminal Court, at a time when the Court was only a plan on paper, with no officials or even an address to its name and, in three years, oversaw the Court’s growth into the institution it has now become.”

Medamulana diplomacy not effective
This proves that it is not easy to win the support of Al-Hussein by using Medamulana diplomacy. The Government of Sri Lanka accused Pillay of being pro-LTTE. The evidence shown was her South African Tamil origin. Prof. G.L. Peiris and Mahinda Samarasinghe, the Sri Lankan Ministers who addressed the UN said she was partial and emphasized that justice could not be expected from her. But now, the Sri Lankan Government cannot level the same charge against Al-Hussein because he always tries to appear as a friend to the Middle Eastern nations.

Al-Hussein may compel Sri Lankans to look into the matter more moderately. The Sri Lankan Government carried out a massive campaign in Sri Lanka against Pillay, depicting her as an agent of Tamil Tigers. The government tried to show that she had wanted to remove the statue of D.S. Senanayake and the Buddhist flag at the Independence Square, while she was touring Sri Lanka. The aim was to win the sympathy of local people before a possible UNHRC investigation.

However, it is not going to be easy to brand Al-Hussein as a Tamil Tiger supporter. Hence, a judgment under him can further embarrass Mahinda Rajapaksa locally and internationally.
Ceylon Today