Sri Lanka: Calling for justice for displaced farmers and Fisher folk of Pulakkudiyiruppu 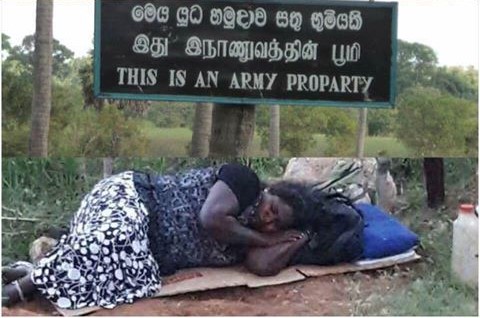 Farmer and fisher families of Pulakkudiyiruppu have commenced a public protest and sathyagraha demanding that their home and cultivation lands, currently held by the Sri Lanka Navy to be returned back to them.

An area of 90 acres owned by 84 families in the village of Pulakkudiyiruppu still remain under the control of the Sri Lanka Navy since 2009. The community primarily comprised of farmer and fisher families who depended on this land to engage in their livelihood activities and earn a living.

Approximately each of the 84 families in distress own a minimum extent of one acre of land in Pulakkudiyiruppu. In an attempt of providing alternative land, the military has provided a 40 perch land with a basic house for 55 families on a site named, Kepapulau Model Village. However the land provided is neither adequate nor suitable for farmer families to engage in cultivation or fisher families to engage in fisheries. This situation has dragged down the socio economic stability of farmer and fisher families in Pulakkudiyiruppu.

“We want our land back to have a decent life and live with dignity” – In this context of having lost their lands and having their livelihoods disrupted, many have resorted to engaging daily-paid wage work and production of illicit alcohol and toddy. These displaced farmer and fisher families eager to return to their livelihood activities and earn a decent living in their own lands. Most families have the needed documentation and evidence to prove their legal ownership of land in Pulakkudiyiruppu. Meanwhile the military has constructed beach cabanas along the coastal line in Pulakkudiyiruppu village.

The displaced families in Pulakkudiyuruppu started a public demonstration calling for justice on 31.01.2017. The community demands to get their lands back. They oppose the unjust relocation at the Kepapulau Model Village as they cant engage in their livelihood activities of fishing and farming. The community has pledged to continue this protest until justice is served and they are allowed to return to their own village.

The Peoples’ Alliance for Right to Land  collectively oppose the displacement of farmer and fisher families and support the communities demands in returning back to their own lands. The government should adhere to its election promises and commitments made on land releases in prior to and after the Presidential Election in 2015. We assert that the Government of Sri Lanka should follow a people-centric post-war development approach and call for the release of community-owned military-occupying land.

In support of displaced farmer and fisher families in Pulakkudiyiruppu in the North, there will be a solidarity protest organized from the south on February 8th, 2017 at 4.00 pm near the Negombo bus stand. Subsequent to the protest in Negombo, a team of supporters will travel to Mullaitheevu to join the wider demonstration with the Pulakkudiyiruppu families on February 09th, 2017. All campaigners, supporters and journalists who wish to stand in solidarity with these displaced farmers and fisherfolk are welcome to join.

The Peoples’ Alliance for Right to Land (PARL) is a voluntary coalition of civil society organizations and individuals, working together against land grabbing and for housing, land and property rights of poor and marginalized communities since 2011. The PARL network brings together environmental, social justice, human rights, and community-based organisations of women, small-scale farmers, fishers and plantation workers, and civil society activists opposed to the dispossession of the poor from their lands, fishing waters, and homes; and in solidarity with the struggles of the affected peoples.