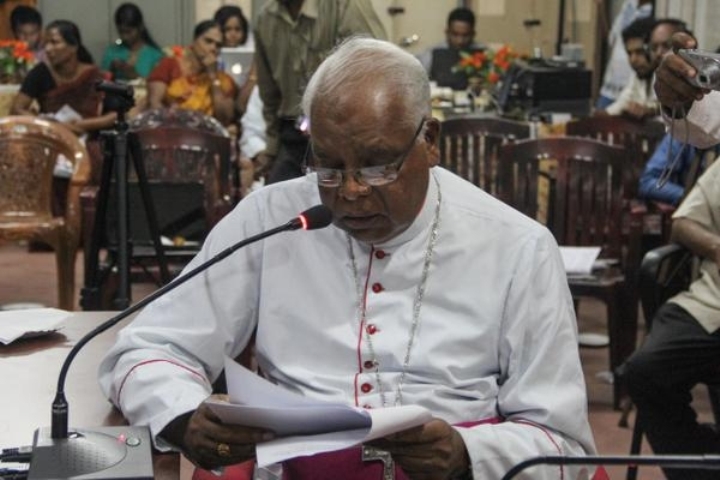 Making a submission to the Presidential Commission on Missing Persons, Mannar Bishop Rayappu Joseph said that he has decided not to make representations before your commission as he has grown to be weary of domestic mechanisms in resolving serious injustices that Tamil people.

The Chairman and Commissioners, Presidential Commission on Missing Persons.
Dear Commissioners.
Submission Regarding My position with regard to appearing before the above Commission in Mannar

I am thankful for your very kind visit to me and for your personal invitation to testify before the commission during it’s sittings to be held in Mannar between the 8th and 11th of August 2014.

I am writing to inform you that having considered the following I have decided not to make representations before your commission. I have over the years grown to be weary of domestic mechanisms in resolving serious injustices that Tamil people have faced over the period of the war, prior to it and after it’s conclusion. Over the years many commissions such as yours have been set up and there is absolutely no shred of evidence that they have tackled impunity. Most, if not all of these commissions have provided only to be eye washers for the then Governments in power. As Ms. Navaneetham Pillay, UN High Commissioner for Human Rights noted in her report to the UN Human Rights Council in March 2014, the problem in Sri Lanka is one of lack of political will to end impunity. Despite knowing this acutely for many years now, I personally appeared before the Lessons Learnt and Reconciliation Commission and gave evidence. The Government has not acted seriously on any of the issues on which the Tamil people including myself gave evidence. Given this experience I find it impossible to draw myself to appear before your commission. May I add this that the Commission’s name itself – “Commission on Missing Persons”- appears to me to indicate a denial on the part of those who created this commission that the issue is one relating to enforced disappearances and not merely about ‘missing persons’.

I am aware that many Tamils, throughout the North and East who have lost their kith and kin have come before your commission and narrated their grievances. The only reason why they come before the commission is not because they believe that your commission will help locate their loved ones, but because they have nothing to lose in doing so. Hence they go and air their grievances wherever they can, whilst well knowing that no consequences are likely to follow. This is the terrible plight of the Tamil people in this country. I have also been informed that the Commision in its various sittings in the North and East, unfortunately, has been more interested in knowing about their economic well-being, rather than engaging in a serious effort at locating the disappeared. There are also credible reports that the Government has launched a programme to encourage families of the disappeared to obtain death certificates, which has been happening parallel to your commission’s sittings throughout the North and East. I am also concerned that the recent expansion of your mandate and the appointment of international experts to oversee the work of the commission without any clear terms of reference has been deliberately done to undermine the work of the UN OHCHR’s inquiry into Sri Lanka which commenced recently. Without serious commitment to truth and justice there can never be Reconciliation and Peace will ever remain a mirage.

Please permit me to present to you my last submission with my covering letter sent to His Excellency the President on his own invitation sent through His Eminence Malcom Cardinal Ranjit, Archbishop of Colombo. This was made on the 21st, August, 2012. It explains 14 grievances with my expectations spelt out in the form of suggestions.

Consequent to this, two meetings were held with me regarding this matter by the Hon Minister of Foreign Affairs Mr G.L Pieris and the President’s Secretary Mr Lalith Weeratunga in the presence of the Cardinal Archbishop of Colombo. At both these meetings they failed even to have a look at even one of the grievances raised by me in spite of my repeated insistence. A third meeting was promised by them to be held along with those state-personnel with experience and expertise with regard to the grievances proposed and this meeting never saw the light of day as that was the end of this exercise and now two years have passed allowing us only to gasp in the air.

For the above reasons I regret that I am not in a position to appear before your commission with any hope of a retrieve. The following is the said submission: