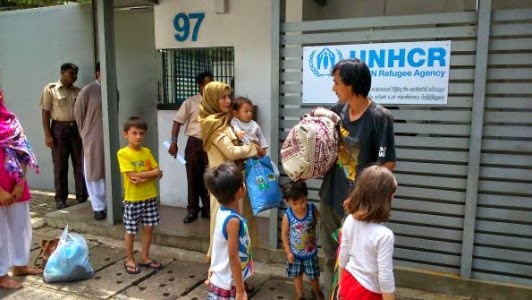 205 Pakistani, Afghan and Iranian refugees and asylum-seekers remain in detention in Sri Lanka, the agency said adding that it continues to seek access to them to assess their protection needs.

The United Nations High Commission for Refugees (UNHCR) expressed deep concern today as Sri Lanka continues deporting the Pakistani, and Afghan asylum seekers back to their own countries from where they fled.

Sri Lanka’s Department of Immigration and Emigration said that Pakistani, and Afghan nationals visiting Sri Lanka will no longer receive tourist visas upon arrival at the airport and the asylum seekers who are staying in the country without visa for a long time will be deported.

The Department said the process will commence with the deportation of 147 Pakistani, and 85 Afghan nationals arrested by Sri Lankan Authorities.

UNHCR said that it has learnt that a total of 36 Pakistani asylum-seekers have been deported from Sri Lanka since last Friday. More could follow, including women and children.

The refugee agency urged the Sri Lankan authorities to stop the deportations and grant them access to refugees and asylum-seekers still detained in Colombo.

The deportations took place between August 1 and 5 following two months of arrests and detentions of people of concern to UNHCR, the agency said adding that most of the deportees have arrived in Pakistan and released but the agency was unable to monitor their return conditions.

UNHCR said the reports that the families of deported men including women and children who were not detained will also be sent back to Pakistan have caused a great deal of anxiety among the refugee and asylum-seeker population in Sri Lanka.

Meanwhile 205 Pakistani, Afghan and Iranian refugees and asylum-seekers remain in detention in Sri Lanka, the agency said adding that it continues to seek access to them to assess their protection needs.

Sri Lanka said last week that there are about 1500 Pakistani, and Afghan nationals who were staying in the country illegally draining the island’s resources.

The government said the influx of asylum seekers, mostly Pakistanis has resulted in serious law and order, security, as well as health related issues for the authorities while the country is burdened and the UNHCR is too slow to process their cases and resettle them.

The government said it has asked the UNHCR to expedite the process of resettlement to ensure its completion within a short period of time and ensure that asylum seekers are provided with adequate facilities and monetary assistance to live in Sri Lanka until their claims are processed or resettlement is found but the UNHCR has not addressed these issues and too slow to work on refugee requirements.

Responding to the Sri Lankan government’s reasons, the UNHCR said the agency, which conducts refugee status determination in the country, is taking steps to increase its capacity to enable the efficient and timely processing of these asylum claims.

“We are also exploring ways to assist the most vulnerable asylum-seekers, including by setting up referral networks for greater support as they await a decision,” the refugee agency said.

“UNHCR recognizes the Sri Lankan government’s wish for quicker solutions for the refugees. However, resettlement to a third country is not a right and is a limited solution due to the small number of resettlement countries and places globally,” it said.

Meanwhile, thhe refugee agency appealed to the Sri Lankan authorities to respect the principle of non-refoulement by not sending people back to a place where their lives could be in danger without the opportunity to assess their needs for international protection.