Are EU and US embassy in Sri Lanka in tune with every misdeed of the govt? – Senior journalist 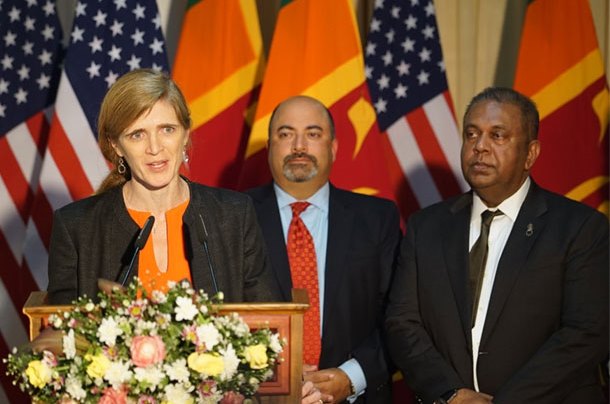 Namini Wijedasa, a senior journalist in Sri Lanka in a series of twitters has questioned whether European Union office and US embassy in Sri Lanka supporting government’s anti-democratic law reform in the country?

Some of the twitters of @Nimilamalee follows:

(9) fact that this ridiculous amendment is being brought in to meet EU preconditions for GSP Plus? Or is the @EU_in_Sri_Lanka, like

(10) @USEmbSL too busy gushing over everything this Government does not notice how detrimental this amendment is going to be?

(12) Is the @USEmbSL, which seems to endorse every sneeze this government issues, happy with these conditions when its own, back home,

(13) ensure legal representation at time of arrest? What of ICCPR guarantees? Does this Government not have obligations? @EU_in_Sri_Lanka

(20) Government now done the exact opposite. If the @EU_in_Sri_Lanka accepts it, how consistent are the EU's adherence to core principles?

Siting in article in The Island newspaper which quoted Justice Minister Wijedasa Rajapaksa defending an amendment to the Criminal Procedure Code that has come under strong criticism from Human rights Commission and Bar association of Sri Lanka.

The proposed amendment takes away arrested suspect’s right to access to lawyers before their statements are recorded by the police.

Justice Minister Dr Wijeyadasa Rajapakse, PC, yesterday told The Island that the government would go ahead with the proposed amendment to the Criminal Procedure Code meant to deprive lawyers an opportunity to meet their clients before the police recorded their statements.
Minister Rajapakse stressed that particular amendment was intended to facilitate police investigations,

The minister said that the new amendment would ensure that the police could record statements without undue interference.
The relevant Bill has been published in the Gazette on August 12.

The Bill proposes to introduce a new section 37A to the Criminal Procedure Code. The proposed Section 37A(1) states that “any person who has been arrested and detained in custody, shall have the right to retain and consult an Attorney-at-law of his choice at his own expense, after the recording of his statements in terms of the provisions of subsection (1) of the section 110 and prior to being produced before a Magistrate.”

Pieris said that the proposed amendment was meant to deprive suspects access to lawyers until their statements were recorded violating the rights already guaranteed by the State under rules made by the Inspector General of Police in accordance with the Police Ordinance.

“The Protection of Victims of Crime and Witnesses Act No. 4 of 2015, grants an aggrieved party a right of representation at the police station from the inception. However a suspect’s right to be represented will be limited by the proposed Bill resulting in unequal treatment,” BASL President Alagaratnam said in a letter addressed to President Maithripala Sirisena.
BASL warned that the controversial move would certainly undermine the progressive steps which had been previously taken consequent to a settlement reached in the Supreme Court in a Fundamental Rights Application.

The HRCSL has alleged that there had been many instances of torture as well as cruel, inhuman treatment of suspects at police stations between the period of arrest and the conclusion of the recording of their statements. Dr Udagama warned that denial of access to lawyers would certainly worsen the situation. “As such depriving suspects under arrest and detention of access to their lawyers until the conclusions of their statements will result in a greater risk of suspects being subject to torture, cruel and inhuman treatment as well as illegal arrest and detention by errant police officers.”

“The passage of the new Bill will hinder the efforts of the Government which has expressed its determination to stop torture in Sri Lanka.”