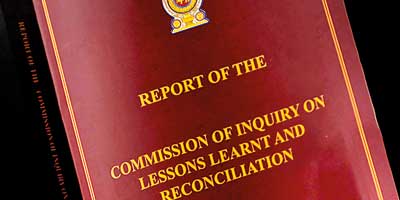 Image: the tasks encompassed within its mandate have already been performed by the Lessons Learnt and Reconciliation Commission (LLRC, 2011)

The recent appointment by President Gotabaya Rajapaksa of ‘yet another’ Sri Lankan Commission of Inquiry to study past Commission reports with a view to finding out if ‘any human rights violations, serious violations of international humanitarian law and other such serious offences have been revealed’ is, to put it bluntly, like a bad line in a particularly atrocious comedy.

A thin guise to brush away state obligations

This newest Commission, the latest in a long line of distinguished and not so distinguished bodies, has been tasked to look at what recommendations have been made by past Commissions and what gaps exist in implementation thereof in their report. But that is no saving grace. It seems rather, a thin guise for brushing away the obligations of the State in that regard. It promises no relief to the failure of justice for victims across race and ethnic divisions, whose pain and anguish remain unaddressed. Reportedly one of its members, a former police chief, is also a serving head of a constitutional commission which raises different questions of conflict of interest.

And to be clear, that failure of justice that I refer to, is not the exclusive province of a specific minority, as those blinded by communal passions, might like to argue. Rather, if any thread drew Sinhalese, Tamils and Muslims together in shared grief through the decades, it was the persistent practice of state terror. Surfacing and resurfacing with each conflict, each deadlier than the last, these state practices resulted in thousands of extra judicial executions and enforced disappearances. Yet community leaders and politicians alike declined to recognise that common failure of justice, preferring instead to use communalistic slogans to advance political agendas.

This was a pitiable reflection on their own culpability. As state actors repeated their refusal to fight a war against the Sinhalese in the South or the Tamils in the North while having their hands tied behind their backs by the Constitution, gross human rights abuses continued as part of state policy. Appointing Commissions by one Government after another became a favourite evasive tactic as we may recall. But even so, this latest exercise is so farcical that it quite takes one’s breath away.

The new Commission is a spectacular non-event

Quite apart from the expending of public funds on the exercise, the appointment of this body is a spectacular non-event. In other words, the tasks encompassed within its mandate have already been performed by the Lessons Learnt and Reconciliation Commission (LLRC, 2011) under the term of this President’s brother, himself the country’s Executive President at the time, Mahinda Rajapaksa. As was analysed in these column spaces at the time, the LLRC looked at previous Commissions and gaps in the implementation of their recommendations. The LLRC report itself fell between a rock and a hard place as it were.

Government allies, including most notably the Jathika Hela Urumaya (JHU) alleged that the LLRC has not taken into account the many assassinations carried out by the LTTE between 1972 and 2009. It was also alleged that the LLRC had exceeded its mandate by referring to an ‘ethnic problem.’ One strong point in that Report was its call to implement the Udalagama Commission’s recommendations regarding the brutal extra judicial killings of seventeen Tamil and Muslim aid workers in Mutur in August 2006 and the killings of five Tamil students in Trincomalee in January of that same year. More than most, these two cases expose the fault lines in our justice system in respect of investigation, prosecution and adjudication, including the absence of an effective witness protection law with a Protection Division situated independently from the Department of the Police.

There were other excellent recommendation in that Report, drawing from previous Commission reports which, as the LLRC noted, had been disregarded, referring to the lack of public confidence in such Commissions as a result. These included several recommendations in respect of arrest and detention, abductions, the disarming of persons in possession of unauthorised weapons along with their prosecution. Atrocities committed by paramilitary forces backed by the Government recieved specifically critical attention. Interestingly, the LLRC also called for the enactment of a right to information law. This perhaps, was the one recommendation that came to fruition in the years that followed, albeit under a different administration.

A country deeply in crisis then and now

The issues that the LLRC Report raised in regard to the suffering of Tamil civilians in the war theatre of the North and East echoed tales of horror by Sinhalese families caught up in civil conflict in the South during the late nineteen eighties which were documented by the 1994 and 1998 Disappearances Commissions. As much as mothers still wail on the streets of the North regarding their missing children, Sinhalese mothers trekked to Colombo decades later, to try and find out the fate of a habeas corpus application lodged twenty years back in respect of a missing son or daughter.

As importantly, the LLRC Report showed a country deeply in crisis, where the accountability of political government was nonexistent. It captured a reality where law enforcement authorities are so politicized as to be virtually negligible in impacting on law and order and where public institutions are severely politicized. The failure of the Rule of Law was paramount. The LLRC pointed to state practices on those in detention not being given proper access to counsel and where their relatives are denied information as to their whereabouts. That remains true now as it was then.

The one difference between then and now would perchance be the further deterioration of the judicial institution in its capacity to combat political pressure coupled with the alarmingly excessive militarisation of the civil and governance process. Needless to say, this Report was largely disregarded by the President which appointed the Commissioners and by his successors. Yet the LLRC Report contains harsh reminders that cannot be just brushed away. Indeed, a familiar refrain in the post-Trump United States stands eerily true for us as well.

Accountability needed for healing to start

As the new US President Joe Biden appeals to the populace to ‘heal’ and ‘move on’, a significant portion of which believes that he did not legitimately win the Presidential elections, there is an important rider. Policymakers, activists and advocates argue that first, ‘accountability’ for years of hate, violence and racial division must lie. As colleagues of the police officer who died after engaging with pro-Trump supporters at the riot at the Capitol said, ‘those responsible for inciting the riot must be held accountable. Otherwise this can happen again and again.’

These are powerful but simple words that sum up transitional justice in one sentence. The insistence on accountability is equally true of Sri Lanka as it is of the United States. Prevarications, Commissions of Inquiry and one political charade after another will not detract from the call for accountability for human rights abuses at the hands of state agents.

That stubborn call for justice in the face of all odds by those who have suffered and endured will ultimately prevail even as Presidents and lesser mortals alike, may rise and fall.