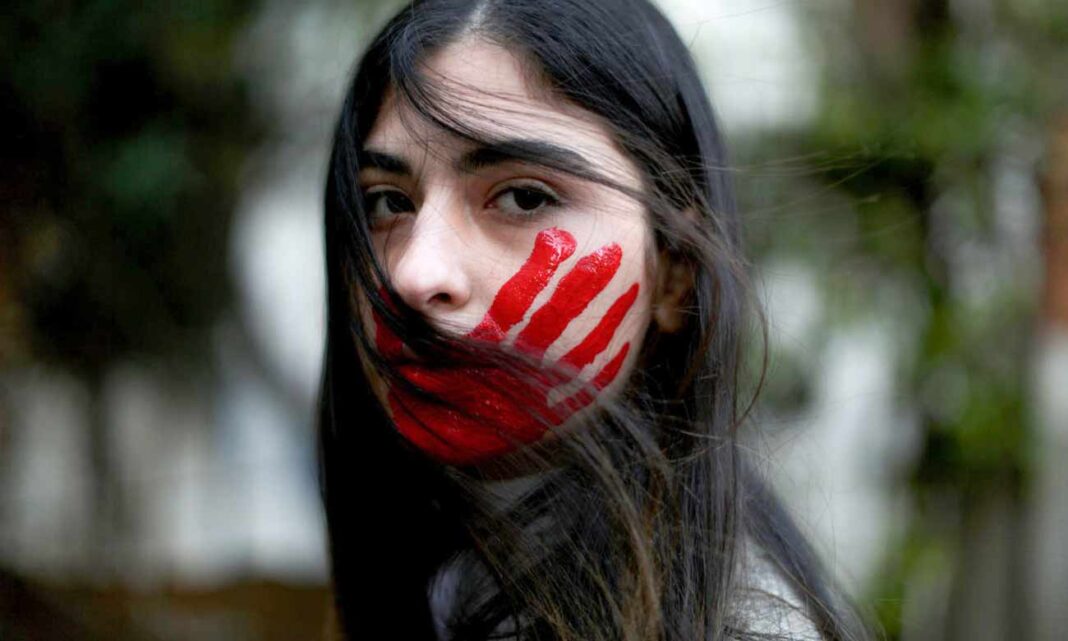 Image: A Lebanese woman poses with her face painted with a red hand during a demonstration against sexual harassment in the Lebanese capital, Beirut – 7 September 2019 (AFP)/enabbaladi.net

The Sri Lankan government has ordered an investigation into sexual abuses against media workers in newsrooms after a significant number of women journalists shared their experiences on Twitter. ( Later on 29th June  Media Minister and Cabinet Spokesman Keheliya Rambukwella told reporters  that his Ministry will not launch an investigation based on social media reports of allegations of sexual harassment in media institutions. – SLB)

After a female journalist Sarah Kellapatha tweeted about her bitter experience of being sexually abused on June 18, other female journalists joined in to speak up about their own sexual violence experiences. The minister of mass media, Keheliya Rambukwella, on June 22 ordered the Government Information Department to investigate the case regarding the allegations made on social media.

Salacious remarks over dresses, body shaming, unwanted kisses and kissing attempts, unwanted expressions, rape threats and other forms of abuses were commonplace in newsrooms according to the comments by women journalists in the online outpouring. Sarah Kellapatha said on Twitter: “I’ve had a male colleague threaten to rape me once during a normal conversation we were having.”

Female journalists shared that the most common sexual predators were their seniors and bosses. Sahla Ilham, another female journalists who spoke out on Twitter, said she was sexually abused by a “famous editor” at a now-defunct paper and that he had pressured her family to keep the incident quiet. One of the journalists behind the online campaign, Aisha Nazim, compiled a list of abusive experiences shared by women media workers on a Twitter thread on June 18.

These posts by female media workers had a different character to the 2019 #MeToo campaign and included more detailed information about the perpetrators. Sri Lankan media fraternities are strongly supporting the campaign, say activists.

According to Sri Lankan law, sexual predators may be imprisoned for up to five years, fined or both, and may have to pay compensation for sexual abuse.

FMM convener, Seetha Ranjanee, said: “Impartial investigation should be carried out expeditiously, especially regarding incidents in State media institutions. The FMM requests all stakeholders to take an active role in formulating gender policy. Introduction of gender sensitive guidelines in all media outlets should not be delayed any further.”

FMETU general secretary, Dharmasiri Lankapeli, said: “The Government of Sri Lanka, which has signed the Convention on the Elimination of All Forms of Discrimination against Women (CEDAW), must take immediate action against the perpetrators of sexual abuse. The FMETU calls on the government to take immediate action to end the ongoing sexual harassment of women in the English, Sinhala and Tamil medium media houses.”

The IFJ said: “Women journalists in Sri Lanka have called time on abuses that have clearly been endured for too long in silence. Now it is time for serious action, not only by investigators but also by media companies to take full responsibility to eliminate sexual violence in the workplace.”