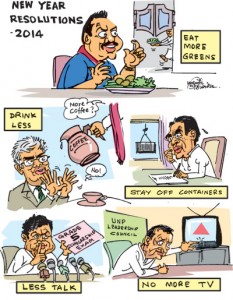 The Government has gone into hyperactive mode after signals through its own channels indicated that the United Nations Human Rights Council’s March sessions may take a serious turn over alleged war crimes and other issues.

Hectic preparations, a feature absent in the past except a show of strength in numbers in Geneva, are under way. Presidential Secretary Lalith Weeratunga will leave for Geneva later this month to brief envoys accredited to the UN there on the progress Sri Lanka was making over issues contained in two successive US-sponsored resolutions. Weeratunga heads a Presidential Task Force assigned to implement a string of recommendations made by the Lessons Learnt and Reconciliation Commission (LLRC) and approved by the Cabinet of Ministers. This week, Weeratunga together with Ravinatha Ariyasinha Sri Lanka’s Ambassador to the UN in Geneva, met different stakeholders in Colombo as part of preparations. One such meeting was with retired Major General Nanda Mallawaratchchi, Secretary to the Ministry of Law and Order to discuss matters relating to the Police.

A similar mission is also being undertaken later this month by External Affairs Minister G.L. Peiris. He will address New Delhi-based envoys of countries which have diplomats accredited to Sri Lanka but do not have a diplomatic mission in Colombo. He has taken this opportunity to seek a meeting with Indian External Affairs Minister Salman Khurshid to discuss bilateral issues and matters relating to the UNHRC sessions. India supported the two successive US-sponsored resolutions. He wants to brief India on the course of action being taken. Some of the envoys Peiris will speak to represent UNHRC member countries such as Algeria, Argentina, Benin, Chile, Estonia, Morocco, Namibia and Macedonia.

Rapp visits Lanka
The move to turn proactive and conciliatory after adopting a belligerent and confrontational posture in the past, a hallmark of Sri Lanka’s fledgling foreign policy, comes amidst a visit to Colombo tomorrow by Stephen J. Rapp, Ambassador-at-Large, Office of Global Criminal Justice in the US Department of State. His office in Washington said on Friday that he will meet a “cross section of government officials, political and civil society leaders on a range of issues.” Even if the official announcement did not give his full title, Rapp is Ambassador-at-Large for War Crimes Issues and was appointed by President Barack Obama.

In that capacity he advises the Secretary of State, the Under Secretary for Civilian Security, Democracy and Human Rights and works to formulate United States policy “on prevention and accountability for mass atrocities.” Among those Rapp will meet are Justice Minister Rauff Hakeem and Attorney General Palitha Fernando.

President Mahinda Rajapaksa who left yesterday on a four day visit to Palestine and Israel has also been mindful of the issues in Geneva. At the re-scheduled weekly ministerial meeting on Friday, he warned the ministers to be extremely cautious over attempts to rouse ethnic tensions. Whichever community was responsible for such actions, he said, the ministers must respond cautiously bearing in mind the religious sensitivities involved. They could be reported as attacks on churches, mosques, temples or other places of worship. The incidents were being ‘blown out of proportion’ by interested parties to embarrass the Government, he warned.

Whilst in Palestine tomorrow, Rajapaksa will confer Sri Lanka’s highest honour on late Yasser Arafat, former President of the State of Palestine and Dr. Mahmoud Abbas, the current President. In terms of a Gazette notification on Friday, both will receive Mitra Vibhushana National Honour. “Know Ye that His Excellency the President will personally award this Honour,” said two different notifications.
Rajapaksa also met a two-member delegation from the Tamil National Alliance (TNA) on Thursday to discuss issues related to the functioning of the Northern Provincial Council (NPC). His Government wants to be in a position to say that it has fulfilled assurances given to the international community over the conduct of provincial elections in the north and that democracy has been restored to the once war-ravaged province. Though he remains engaged with the TNA, troubles for Rajapaksa over the NPC are far from over. Administrative and financial issues formed the core of the discussion. The TNA duo, Chief Minister C.V. Wigneswaran and Parliamentarian M.A. Sumanthiran sought the removal of the Secretary to the Chief Minister. Rajapaksa agreed and asked the TNA to come up with its nominee. He said the TNA could raise financial issues from time to time with Treasury Secretary P.B. Jayasundera. The Treasury Secretary and Cabinet Secretary Sumith Abeysinghe were present at the discussion.

Sumanthiran told the Sunday Times, “We informed the President of a number of obstacles faced by the NPC. Among them was the issue of appointment of officers to the council. The Governor has to make the appointments in consultation with the Chief Minister. We also discussed the appointment of the Chief Secretary. This needs to be done in consultation with the Chief Minister and (we also raised) the question of NPC receiving grants. This includes foreign grants. For this it was agreed to meet with the Treasury officials and discuss the process of receiving such grants. The issue of addressing the needs of the displaced people including the widows and orphans and the detainees was also raised.” In his customary fashion, Rajapaksa invited the duo for lunch after the hour-long meeting which began at noon but they politely declined the offer.

A thorny issue — the running conflict between the TNA and Northern Province Governor retired Major General G.A. Chandrasiri — still remains unresolved. However, UPFA sources hinted yesterday that the matter would be resolved much the same way tensions on the two sides were being eased with a “routine” changeover of the military leadership in the north. The New Year call on the President by the Northern Chief Minister C.V. Wigneswaran showed recognition of Rajapaksa as head of State and indicated a willingness to work together.

However, the TNA has refused to participate in the Government’s reconciliation programme, either through the Parliamentary Select Committee (PSC) or through talks, until the Government makes its proposals public. “You can reach me at any time. We can resolve issues amicably through dialogue,” Rajapaksa told the two TNA leaders. That it comes ahead of the UNHRC’s March sessions is not without significance.

Heightening the UPFA Government’s concerns are reports it is receiving about a new US resolution co-sponsored by a number of countries including Britain. Based on claims that the Government of Sri Lanka has not moved forward on the 2012 and 2013 resolutions to address accountability issues, there are fears that the new resolution would seek to initiate a mechanism for a probe. Though the real shape and format of such a resolution is not clear, the Government is not taking any chances this time. This is particularly after it received confirmation from diplomatic channels that a resolution indeed would be moved by the US. The idea behind the Government move is to re-iterate the official position that the Government has set up its own mechanisms to ascertain fully the circumstances of death or injury to civilians. This is to be one of the major thrusts of Presidential Secretary Weeratunga’s briefings in Geneva. He is to explain that the Army Courts of Inquiry are probing the issue.

This subject, no doubt, will be foremost for Ambassador Rapp, a lawyer and the third Chief Prosecutor, among others, in the case against Charles Taylor, one time Liberian President when he was produced before the International Criminal Court. He succeeded Sri Lankan born Desmond de Silva, QC who served in the judiciary in Britain. Rapp is expected to discuss issues related to this matter with Government officials. His office “coordinates U.S. Government support for international and hybrid courts that are currently trying persons responsible for genocide, war crimes, and crimes against humanity committed in the former Yugoslavia, Rwanda, Sierra Leone, and Cambodia. It also works closely with other governments, international institutions, and non-government organisations to establish and assist international and domestic commissions, courts and tribunals to investigate, judge, and deter atrocity, crimes in every region of the globe. The Ambassador-at-Large also coordinates the deployment of a range of diplomatic, legal, economic, military, and intelligence tools to help expose the truth, judge those responsible, protect and assist victims, enable reconciliation, and build the rule of law.” Rapp, his office said, will be focusing on “Sri Lanka’s justice, accountability and reconciliation process.” He last visited Colombo in February 2012.

Following Rapp to Colombo on January 12 on a two-day visit is Nisha Desai Biswal, Assistant Secretary in the Department of State for Central and South Asia. She succeeded Robert Blake who was also one time US Ambassador to Sri Lanka and is currently serving as envoy to Indonesia. Biswal, an American Indian of Gujarati origin, is on her first familiarisation visit. Diplomatic sources said yesterday that she would meet Government leaders and officials to discuss bilateral matters and issues that are now before the UNHRC. Despite criticism in some sections in Sri Lanka, Biswal is considered a ‘foreign policy star’ in the Obama administration. She worked in the presidential election campaign for John Kerry (now Secretary of State) in 2004 and the Obama campaign in 2008. Her swearing in in November showed part of her power base that included Dennis McDonough, Chief of Staff of President Barack Obama.

A closer look at the UPFA Government’s approach to the two successive resolutions at the UN Human Rights Council in Geneva lays bare an inconsistent and contradictory approach. In 2012, the response was to send more than a hundred delegates at substantial expense to the country’s purse. This was under the mistaken notion that a greater presence of diplomats, lawyers, journalists, religious dignitaries, lobbyists and others would change hearts and minds towards Sri Lanka. Last year, the head of the Sri Lanka delegation, Minister Mahinda Samarasinghe, President Rajapaksa’s special envoy on human rights, made a scathing personal attack on UN Human Rights High Commissioner Navanethem Pillay. Thereafter, the Government relented and allowed Pillay to visit Sri Lanka. She gave a preliminary account of her visit to the UNHRC in September last year and is to present a 10,000 word report in March. The mandate to her from the Council requires the High Commissioner to present a “……comprehensive report followed by a discussion on the implementation of the present resolution at its twenty-fifth session.” These sessions begin on March 3.

The planned visits by Weeratunga and Peiris to present Sri Lanka’s case this time are by themselves an acknowledgement that the previous approaches and initiatives did not produce the desired results — with the External Affairs Ministry playing little or no role. Nowhere was the ineffectiveness felt more strongly than in the US capital, Washington DC. This is despite the Sri Lanka Embassy there having hired the services of two different Public Relations firms not only for propaganda but also for lobbying and fixing various jobs. This is besides another PR firm being hired by Central Bank Governor Ajith Nivard Cabraal, ostensibly to promote Sri Lankan interests. He did succeed in having a couple of by-lined pieces (under his name) inserted in small sections of the US media with the help of this firm. In Britain, where a group of ruling Conservative Party MPs were given free tickets and allowances to travel to Sri Lanka, the EAM’s move also does not appear to have paid dividends. The British Government’s position has hardened. It remains to be seen how the new approach will work. Issues before the UNHRC are not the only subject to draw the Government’s attention this week. There were other issues too
ST