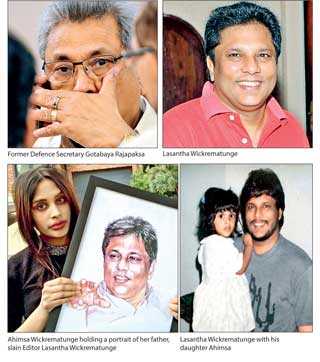 In an exclusive and wide-ranging interview with Daily FT, Ahimsa dispels some of the assumptions about her motive for filing such a case. Following are excerpts:

Q: What are your reasons for filing this civil action under US law? Why not file a civil suit in Sri Lanka?

A: Gotabaya Rajapaksa seems to enjoy unique impunity in Sri Lankan courts. The local Judiciary broke with over a century of tradition by preventing his arrest and halting his criminal trials in several corruption investigations. I believe hoping for a fair trial involving him in Sri Lanka is futile.

A: I want to state very clearly that this case has nothing to do with any election. As of now no election has been announced and no party has announced any presidential candidates. It is Gotabaya Rajapaksa, after this case was filed, who came out and announced that he is running for president. He even thought it would be appropriate to promote his campaign using the Easter attacks. As far as I know no party has endorsed his candidacy even up to now.

I understand why it would be convenient to try and paint this this court case with a political brush. If the person I believe is elected president of Sri Lanka, it would only strengthen my case that justice is not possible in Sri Lanka. Given the stakes, I understand that some people are worried that my actions in their mind may impact in some way the chances of their chosen candidate being elected.

Even the idea of anybody other than Mahinda Rajapaksa ever being president of Sri Lanka again is a new prospect that arose a few years ago. But for over a decade now, my family and I have been speaking with, meeting and seeking assistance from all kinds of officials and Professionals, including different law firms, looking at different possibilities and options for obtaining justice. It was a long quest in trying to settle on the right way forward.

I allege his involvement in extrajudicial killings and attacks on journalists, but did not believe his complicity would be an obstacle to him being elected president.

Q: Your father’s murder was a campaign slogan in the 2015 election that brought about the fall of the Rajapaksa Government and finally resulted in Gotabaya Rajapaksa leaving office as Defence Secretary. But is it your sense that the Government that came to power in that election no longer cares about justice being served in the Lasantha Wickrematunge assassination case?

A: The Police officers investigating the murder have shown extraordinary courage and risked their careers to finish the case and bring out the truth. I often feel they are fighting against the Government, not alongside it. Entities across Government have refused to give murder investigators the evidence they are seeking.

The Prime Minister was one of my father’s closest friends. Is the Government attempting to absolve Gotabaya Rajapaksa from this case by looking for ways for him to claim diplomatic immunity?

On the other hand, fortunately there’s been opposition from both the President and several prominent Cabinet ministers who at least now seem to want justice.

Q: Do you worry that while your case in the US might be successful, Gotabaya Rajapaksa may never be held criminally accountable for the murder of your father?

A: I am hopeful that someday Sri Lanka will elect a president and prime minister who will prioritise justice for victims of attacks against the media over the political expediency offered by associating with suspects of these crimes. Until such time, civil action in an independent jurisdiction is our only opportunity for fair trial.

Q: If your suit is successful, do you think the US Government has a responsibility to take note of the evidence led in your civil action and hold its own citizen accountable through some form of criminal prosecution for the murder of Lasantha Wickrematunge?

A: I am hopeful that we will present compelling evidence in court of Gotabaya Rajapaksa’s connection to my father’s assassination, that will be followed by criminal proceedings. The ideal venue for a criminal trial would be Sri Lanka, but I hope the US Government would also consider such charges as appropriate under their law.

Q: Your civil action demands compensatory and punitive damages from Gotabaya Rajapaksa for the extra judicial murder of your father, if the court finds in your favour. Rajapaksa is a US citizen. Are you aware of the status of his assets in that country?

A: My father was investigating Gotabaya’s assets at the time he was killed. He found out that Gotabaya had sold a house in Los Angeles to a Buddhist monk in 2006 for three times the purchase price. Due to the legal proceedings, I cannot comment on what I have since learnt of the current state of his assets.

Q: Moving on from the case, can you tell me what growing up with your father was like?

A: My father was one of the kindest, most down-to-earth human beings I have ever known. Due to the nature and dangers of his work he was always concerned about our safety. I never got to have a normal childhood. My siblings and I were always his number one priority. He may not have always been physically around growing up due to his work, but he was always there for us when we needed him.

Q: What do you think your father would think of you doing this case?

A: I think he would be happy that Gotabaya Rajapaksa may finally be held accountable for something. It is a matter of public record that he spent his final years trying to hold Rajapaksa accountable for all matter of wrongdoing. I filed this case because I believed that had he not done so he would be alive today. I’m sure my dad would also want me to try and live a normal life now that he’s gone. But I feel this is part of my purpose, and a big part. My life is dedicated to getting justice for the bravest man I ever knew.

Q: What are some of your interests and passions outside of this case?

A: I have always known I was put on this planet to help others and I hope to use my platform in the future for things I’m driven by such as humanitarian affairs and animal and children’s rights and mental health advocacy and of course, in honour of my father, fight for press freedom. I hope when this is all over and done with I can go on to use my voice to fight justice for others who need it and fight for other important causes dear to me.