After the ‘coup’: Justice on a knife’s edge in Sri Lanka ? 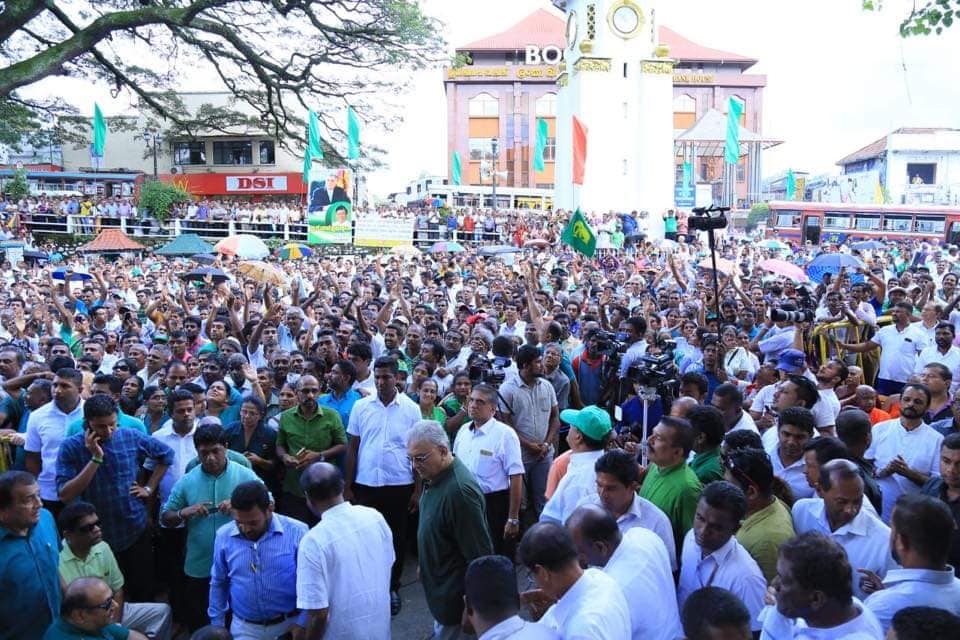 The illegal transfer of power on 26 October is starting to take a toll on high profile investigations and justice processes, lawyers warn, after a week that saw the attempted transfer of a top CID sleuth and the reinstatement of two main accused into active service

By a Special Correspondent

On Wednesday, the OIC of the Gang Robberies Branch of the Criminal Investigations Department (CID) walked into the Fort Magistrate’s Court to deliver his weekly progress report on a high-profile abduction for a ransom case.

Eleven young men went missing from Colombo’s suburbs between August and October 2008. CID investigations, led by OIC Silva, have unearthed a gory tale about a mercenary abduction racket run by Sri Lanka Naval personnel, the ringleader of whom is the infamous Navy Sampath alias Chandana Prasad Hettiarachchi. He obtained his nom de guerre when he was working with a tri-forces intelligence unit allegedly tasked with the murder of Tamil National Alliance MP Nadarajah Raviraj in 2006.

For the better part of a year, the CID was on a manhunt for Navy Sampath, who was eventually apprehended in August 2018. The department’s investigation and affidavits from witnesses revealed that the key suspect was allegedly being harboured by then Navy Commander Admiral Ravindra Wijeguneratne. Wijeguneratne is now the country’s highest ranking military officer, serving as Chief of Defence Staff (CDS). His alleged involvement in harbouring the fugitive Navy Sampath set the CID on a collision course with the top military official.

The CID pushed hard for an opportunity to question the Admiral. Fearing the interrogation would lead to the arrest of his CDS in September this year, President Maithripala Sirisena packed the officer off overseas and pitched into the CID and the Attorney General for arresting military officers in the course of their investigations without building enough charges to indict them in court.

Refusing to back down, the CID has stubbornly pursued the case. The department shelved the interrogation of Admiral Wijeguneratne for a few weeks, quietly gathering more evidence against the official’s actions including the alleged transfer of half a million rupees into Hettiarachchi’s account from a discretionary fund operated by the Navy.

But pressure is building on the CID investigating team by the Fort Magistrate Ranga Dassanayake to question Wijeguneratne and produce him in court. At the last court date, the Magistrate told the CID to be prepared to produce the high-ranking officer in court within two weeks or provide an explanation about why they were flouting court orders.

Investigations into the abduction of the 11 boys began in 2009 but picked up steam only after the defeat of President Mahinda Rajapaksa in 2015. OIC Silva is also leading other key investigations at the CID, including into the assassination of The Sunday Leader Editor Lasantha Wickrematunge, the abduction and assault of The Nation Deputy Editor Keith Noyahr, the disappearance of Prageeth Ekneligoda, the attack on Rivira Editor Upali Tennakoon and others. Investigation trails on many of these cases have led to high ranking military officials who served during President Rajapaksa’s tenure and in some cases, to the former Defence Secretary.

It is in this backdrop that Silva’s lightning transfer was set in motion last Sunday  night. IGP Pujith Jayasundera issued the transfer order in writing, dispatching Silva to the Negombo Division on the basis of a “service requirement”.

The transfer raised eyebrows both locally and internationally, given the portfolio of cases OIC Silva handles at the CID. Most of these crimes are emblematic of the impunity for attacks against political dissidents by shadowy sections of the military which enjoyed patronage and protection from sections of the former ruling regime.

During a month-long political crisis, parties to the conflict had focused on waging a political battle, in Parliament and the Courts. Silva’s transfer was the first indication that the illegal transfer of power on 26 October was moving beyond the political realm.

Human rights activists and lawyers raised the alarm that the de facto Sirisena-Rajapaksa regime was consolidating its grip on power by dismantling justice processes that had been slowly but surely moving over the past four years.

Silva’s role in probing attacks against journalists drew wide support for him in the media. Complaints were lodged with the National Police Commission, which has sole authority over all police transfers, and the commission sought an explanation from the IGP about the reasons for the sudden transfer.

OIC Silva’s lawyers were preparing briefs to take the matter to court.

The daughter of slain editor Lasantha Wickrematunge, Ahimsa, wrote a strongly-worded and poignant letter to President Sirisena, issuing a character certificate for the CID officer who had flown to Australia to question her about her father’s murder.

With pressure mounting and insidious motives being attributed to the transfer, IGP Jayasundera reinstated OIC Silva at the CID within 24 hours. In a letter to Defence Secretary Hemasiri Fernando, the IGP explained that the transfer had occurred on the orders of President Sirisena. In the revealing letter, IGP Jayasundera informed the Defence Secretary that he had received a telephone call from the CDS on 16 November, informing him of a discussion about OIC Nishantha Silva having LTTE links, which had taken place at the National Security Council meeting on 13 November. The very day he received the phone call, IGP Jayasundera wrote to Senior DIG CID Ravi Seneviratne, requesting a report about the officer.

Now in the public domain, the response from SDIG Seneviratne, in a letter dated 18 November, was to stand steadfastly with OIC Silva, who he said was an exemplary officer with an excellent record for pursuing criminals and securing convictions.

Insisting that the allegation of Silva being linked to the LTTE was malicious and without basis, SDIG Seneviratne said there were no intelligence reports or other evidence to justify this claim. SDIG Seneviratne also accused the CDS of making the allegation and said the aspersions cast on OIC Silva were an attempt to influence investigations being conducted by the CID sleuth. He also went one step further, saying it was clear that the conduct of the CDS was an offence punishable under the Victim and Witness Protection Act.

In his letter to the Defence Secretary, IGP Jayasundera wrote that despite this report by SDIG Seneviratne, he transferred OIC Silva on the orders of President Sirisena on 18 November. President Sirisena’s Ministers have denied he issued the order at a ‘Cabinet’ press conference yesterday.

On Monday (19), Silva and other senior officials of the CID met with a top Defence Ministry official. During the meeting, both Silva and CID Director Shani Abeysekera were offered promotions to move out of the CID. Both officers turned down the promotions, insisting they would take transfers given to them to any local police division instead. They told the official that cases they had been painstakingly working on for years would effectively be closed once they were transferred. The CID officers also expressed deep dismay at the willingness of the political establishment to so readily believe the allegations made by an accused – the CDS – in a case against the investigating officials. In fact, branding Silva “LTTE” is grossly unjust, CID sources say, because the officer has been instrumental in dismantling Tiger intelligence networks and led investigations into bomb explosions targeting VVIPs in Colombo. Out of 61 LTTE cases Silva has worked, he has already got convictions in 31 with other cases pending, the sources added. Furthermore, Silva’s immediate family has a long history of service in the country’s armed forces.

Hours after the meeting between CID officials and the top defence official, the transfer orders were revoked. Official notice from the IGP arrived on Tuesday (20), but the letter was backdated to Monday (19).

While Silva and the CID may have won a temporary reprieve, other disturbing developments have unfolded this past week.

Sri Lanka Navy Lt. Commander Krishan Welagedara is the CID’s star witness in the navy abductions case led by OIC Silva. The naval intelligence officer testified that he had encountered the abducted boys at a naval detention centre named ‘Gun Site’ at the Trincomalee naval base. Welagedara’s testimony has helped the CID to ascertain the boys’ last known location and piece together the gruesome manner in which they may have met their end. His testimony led to the arrests of several senior naval officers including Commander Sumith Ranasinghe and Commodore D.K.P. Dassanayake in connection with the abduction racket.

Commander Ranasinghe is the main accused in the high-profile abductions case, accused of holding the young boys at Gun Site, allegedly at the request of the ringleader Navy Sampath. Despite evidence surfacing about his involvement in the abductions case, Sumith Ranasinghe was granted a promotion to the rank of commander in 2016 and is currently out on bail in the same case.

After he became a star witness for the CID while still serving in the Navy, Lt. Commander Welagedara was provided with a security detail on the instructions of the President. The witness has already reported receiving threatening phone calls, allegedly from Commander Ranasinghe over his decision to tell the CID his story.

On Wednesday, the IGP also reinstated IP Neomal Rangajeewa at the Police Narcotics Bureau. Rangajeewa, together with Prisons Commissioner Emil Lamahewa, are main suspects in the case involving the gruesome killing of 27 inmates at the Welikada Prison in 2012. Investigations into the case revealed that IP Rangajeewa had been at Welikada on the day of the alleged massacre, with a list of prisoners believed to have been marked for death. IP Rangajeewa was arrested in March 2018 and finally obtained bail from the Court of Appeal in September.

The move was a threat to families of the aggrieved and their quest for justice said Senaka Perera, a lawyer for victims of the Welikada prison killings whose clients are alarmed by the reinstatement of IP Rangajeewa.

The Committee to Protect Rights of Prisoners headed by Perera will now file a petition with the National Police Commission against the reinstatement, Attorney Perera said, adding that his clients were now concerned investigations into the Welikada case would be stalled.

Activists worry that the developments of the past week could have long-term impacts for similar key investigations and the change of the political guard could mean a major roll-back of processes to get justice for victims of heinous crimes committed with impunity in the recent past.

“Watch closely,” tweeted human rights lawyer Deanne Uyangoda, upon news breaking of IP Rangajeewa’s reinstatement at PNB. “The scaling back on accountability and ensuring recurrence of violence and impunity has only just begun.”