After Pillay left the Sri Lanka, the government appeared to return to its self defeating denials 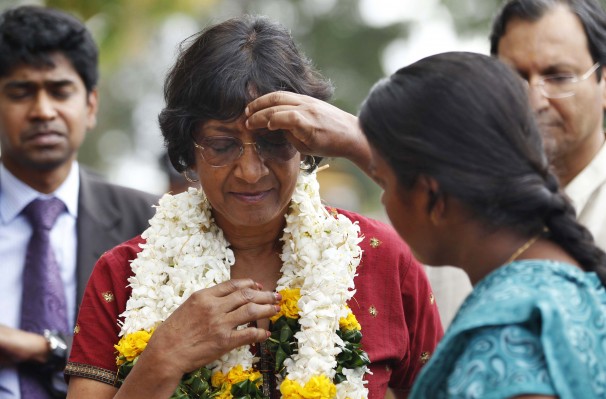 Ranga Jayasuriya
Sadly though, the government returned to its old habits soon after the UN High Commissioner for Human Rights, Navi Pillay, left the country after her official tour. All the hard work the government had done to put on its best face for Pillay were soon to be dwarfed by its usual paranoid outlook. That is sad, especially in the context of some salient initiatives that are embarked upon in order to address long-neglected human rights and governance concerns, ahead of the arrival of the UN Rights Chief.

Also ahead of Pillay’s visit, the Police Department was brought under a separate ministry, implementing another recommendation of the Lessons Learnt and Reconciliation Commission (LLRC). Of course, the move, at best is half-hearted, for it is headed by a former General of the Army and that both the Ministry of Defence and the Ministry of Law and Order are being brought under the purview of the President. Even the epithet, the Ministry of Law and Order conjures up memories of the authoritarian States in the Middle East and the former Warsaw bloc.

Still, optimists would say something is better than nothing. Earlier, a panel of Army officials appointed by the then Commander of the Army to report on the implementation of the LLRC recommendations recommended the current status of the Sri Lanka Police under the Ministry of Defence be continued.

Their raisons detre had been that in many countries where the police force comes under the Home Ministry or Provincial Administration during times of internal conflicts proved to be ill-fitting to face internal insurgencies. It also proposed that the Ministry of Defence should study and make recommendations with regard to the role of the police in insurgencies and terrorism.

However, what was lost on the drafters of the report was that the proposals were meant for a peacetime police and a peacetime Army.

LLRC recommendations
Nonetheless, the government at last decided to act upon some of the salient recommendations of the LLRC, was interesting, though cynics would say proof of pudding is in the eating.

However, much of the goodwill cultivated has now evaporated into thin air. Saner counsels that prevailed before and during Pillay’s visit have been overshadowed by a cacophony of paranoid and retrogressive voices.

The government has opted to its standard practice of denial and slander of critics. When Pillay complained that the people she met in the former warzone of Mullaitivu and the eastern city of Trincomalee had, subsequently, been intimidated and visited by the police, the government’s interlocutors challenged her to provide evidence. That is veritable bunkum. A sensible government would rather investigate those serious allegations made by a senior UN diplomat. The barefaced denials on the part of the government compelled Pillay to go public with the allegations.

After Pillay left the shores of the country, the government appeared to return to its self defeating denials over abductions and disappearances that beset this country. Some of the government interlocutors, have asked for evidence of those instances. They should not go much further. The LLRC report contains disturbing details of a series of disappearances and abductions – some of those reported in the LLRC report, such as the white van abductions in the South would not fall within the purview of the newly appointed presidential commission.

The government has slammed the UN Human Rights Chief for her observation that Sri Lanka is heading in an increasingly totalitarian direction, accusing her of transgressing her mandate and the basic norms, which should be observed by a discerning international civil servant.

Pillay should surely have a right to opinion, and being an activist judge, both at the South African High Court and International Criminal Court, she said what millions other Sri Lankans have whispered to each other.

Point to ponder
What is equally important is that the UN Human Rights Chief was not here to take lessons on professional decorum from the officials of a regime, which has a highly-disputed human rights record. Sri Lankan officials could tear Pillay to shreds in the airwaves of the State radio and TV, but, the UN would not give two hoots.
There are some existential realities in international relations: Small States do not have the luxury to snub the established international system, the only exception to this norm is that you have friends in high places, such as Israel’s place in the US strategic interests. Neither could small States rewrite the rules of international relations. There are instances during which certain exceptional individuals whose larger than the life size image – such as Canada’s Pierre Trudeau or South Africa’s Nelson Mandela – added additional clout and moral authority to their respective States. But, such luxury is an anomaly and not the norm.

When Pillay says Sri Lanka is becoming totalitarian, much of the advanced democracies nod in agreement. She does not need the approval from Uganda and Equatorial Guinea.

It is those advanced democracies that rule the roost in the international system, and that is a lesser evil than letting a bunch of tin pot dictators to dictate the fate of seven billions souls.

The government should, however, be happy that Pillay did not push for an international war crime

investigation. Instead, she, in a marked climb down from her earlier position, expressed her preference to a credible local process.

Her endorsement enhances the credibility of the process in particular and, the local Judiciary in general. That also shields the government from a potential international war crime probe. The government should make avail of that opportunity.
– Ceylon Today