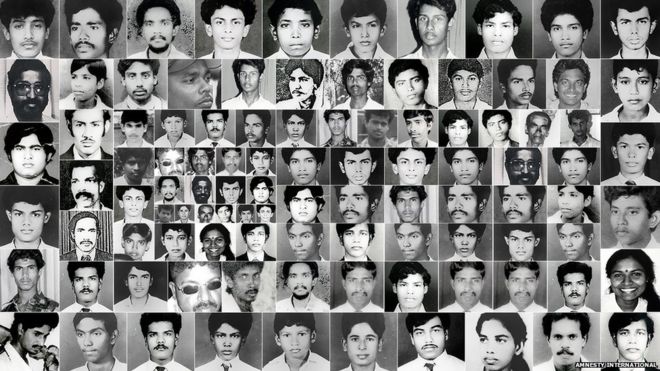 Even from a fairly prosaic standpoint, the Unity Government’s proposed Office of Missing Persons (OMP) Bill has all the explosive potential of a double edged sword. This is the first prong of the Government’s promised package of transitional justice reforms originating from the 2015 United Nations Human Rights Council resolution.

Undermining from within
Unlike Commissions of Inquiry established under Act No. 17 of 1948 (as amended), the OMP will be a permanent body tasked with searching for and tracing missing persons, identifying appropriate mechanisms for the same and clarifying the circumstances in which such persons went missing.

The permanency of the mechanism constitutes a significant departure from familiar traditions of Heads of State establishing Commissions to ward off pressure and then unceremoniously dissolving these bodies as a matter of political expediency. The most recent illustration in this respect was the Udalagama Commission, headed by an otherwise well regarded judicial officer, which became embedded in the ugly thicket of high political controversy.

The undermining of the Commission from within was so blatant as to invite palpable derision. Astoundingly the Commission accepted the ‘assistance of a Deputy Solicitor General as Primary Counsel despite the fact that this same state law officer had been advising and instructing the police and state agents on the August 2006 executions of Action Contra L’Faim (ACF) aid workers in Mutur, which case was itself being investigated by the Commission in the wake of serious prosecutorial and investigative lapses.

Recognizing past negative patterns
The immediate conflict of interest arising therein could have been identified by a child. Indeed, handing down a legal opinion on this issue at the time, two esteemed retired Sri Lankan Supreme Court Justices warned against the bias inherent therein and pointed out that the involvement of state law officers in such a manner violated professional legal ethics.

Probably if this Commission had been allowed to function properly and conclude its investigations, the outcry for an international war crimes inquiry may have had less resonance. But bloated by the arrogance of those who colluded with the Rajapaksa deep security state, the process was doomed literally from the start. Its interim reports were contemptuously tossed aside and were made public only last year.

But the point here was that the Commissioners were quite unable to free themselves from the iron grip of the establishment. This has been the constant negative pattern of those sitting on Sri Lanka’s accountability bodies. And the most telling lesson that this teaches us is that while systems and institutions may be experimented with either way, the absence of individuals possessed of sufficient moral fibre will inevitably cripple the proper working of whatever institutions that are in place, flawed or otherwise.

Wide powers of the OMP
What we have seen under this Government does not inspire much confidence either. An instructive example thereof is the Victim and Witness Protection Authority which has been singularly incapable of making any positive impact with its very functioning attended by confusion worse confounded.

The government’s ratification this year of the United Nations Convention on Disappearances also means little if this is not reflected in national law. Enforced disappearances must be criminalized with the Attorney General being put on notice to demonstrate a change in prosecutorial policy. These are the ‘hard’ decisions as opposed to relatively ‘soft’ processes of ‘tracing and identifying’ missing persons.

But dismissing the hysteria of its detractors, there is nothing alarmist in the fact that the Bill allows the OMP to admit, notwithstanding the Evidence Ordinance, statements or material which might be inadmissible in civil or criminal proceedings. Commissions of Inquiry established under the 1948 law had these very same powers. It is the height of ignorance if not folly to suggest that this is a new and dangerous precedent. Sri Lanka’s legal system has not been turned on its head as it were, simply by this provision.

Worrying exclusion of RTI
In other respects however, the proposed OMP is more empowered than COIs. One notable new feature is the power to apply for a court order in order to carry out and observe excavations and/or exhumation of suspected grave sites. Its officers have been empowered moreover to enter without a warrant and investigate suspected places of detention for the purpose of procuring evidence that is necessary for any investigations.

The OMP’s scope is creditably wide, extending to those found to have been ‘missing’ beyond the North and East and without a limiting time frame. Its functioning is subject to the fundamental rights jurisdiction of the Supreme Court as well as a conferred writ jurisdiction on that Court.

However the Bill’s shutting out the Right to Information (RTI) law in its entirety is extremely troubling. Ironically, this comes hard on the heels of the ink not even drying on the RTI Bill itself. If the confidentiality of cases being investigated was a concern, it may have been better to have stipulated protection re information on a case by case basis rather than under this broad generalized exception that we see now. This is unacceptable. That said, protests by the Rajapaksa joint opposition regarding the shutting of RTI from the OMP Bill only demonstrates its collective hypocrisy. After preventing RTI with all might and main during the Rajapaksa Presidency, this outcry must be treated with the profound disdain that it deserves.

Strategic planning for public acceptance
On a more serious note, this is a manifestly difficult line that must be finely balanced. Given that the Bill stipulates that the findings of the OMP will not lead to criminal or civil liability, the fear is that this will end up as a glorified Commission of Inquiry. And its usefulness for Rajapaksa rhetoric leading to a particularly vicious circle of racism and counter-racism must not be underestimated.

Thus, it makes eminent sense for the Government to take this Bill fully before the Sri Lankan people. The matter of enforced disappearances is, after all, not a subject that the South is a stranger to. This discussion must not be limited to Colombo’s elite circles or the ‘twitter’ generation as it were.

In the alternative, the resultant ominous backlash may well destroy whatever good intentions propelling the bringing forward of this draft law in the first instance.
Sunday Times