Action against us unnecessary: Sri Lanka’s envoy on UN resolution 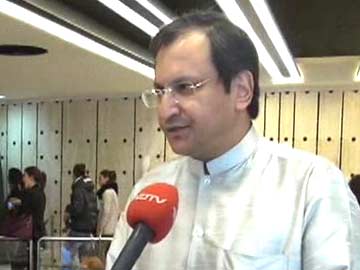 Noopur Tiwari
Geneva:  India yesterday abstained from the vote at the United Nations session in Geneva which calls for an international investigation into alleged war crimes in the final stage of the island’s civil war which ended in 2009.
Indian envoy Dilip Sinha said India does not support the operative para 10 OF the resolution which asks for an international inquiry but encourages Sri Lanka to implement the recommendations of an internal inquiry’s report and findings.
Ravinatha Aryasingha, Sri Lankan Permanent Representative to UN in Geneva, speaks to NDTV’s Noopur Tiwari after the vote.
NDTV: Did India spring a big surprise on you by abstaining from the vote?

Ravinatha Aryasingha: I don’t like to comment on the individual countries and their votes. The important thing is that in this Human Rights Council, since this resolution first came about in 2012, there are today more members out of the 47 countries who do not support a resolution on Sri Lanka. 12 voted against, 12 abstained which makes it 24 as against 23 countries who supported the resolution and of these 23, at least 13 are members of the European Union or aspiring members of the EU and they are very committed through a bloc vote.

From our perspective that is a very clear verdict that the action against Sri Lanka is unnecessary and that it is impeding the reconciliation process which is going on pretty well and if more needs to be done that has to be done together with the government of Sri Lanka and that we need more time and space for that.

NDTV: Given the fact that the resolution now has been adopted nevertheless and your stand is that Sri Lanka does not accept the resolution, what happens in terms of cooperation with the mechanisms that will set in?

NDTV: What about some of the specific allegations that have been made. Some have raised the point that certain reports have been concluded but findings haven’t been made public?

Ravinatha Aryasingha: I wonder in your country when there are commissions appointed by the Army, they make their reports public. I don’t think so.

NDTV: So certain reports then will not be made public?

Ravinatha Aryasingha: The whole idea of these reports is that they report to an authority and procedure will be followed in that context and I think that is true in any country. Show me a country which releases its internal Army inquiries.

Ravinatha Aryasingha: By his movement from side to side he wouldn’t prove to be a very good witness.

NDTV: What is the way forward from here, given that Sri Lanka is a part of the Human Rights Council?

Ravinatha Aryasingha: Sri Lanka has done more in this last year with the Human Rights Council, with the Office of the High Commissioner than I would think many countries represented in that hall. We will not be dictated to what we are doing because we think that we are better positioned to decide what is best for our people.

NDTV: You mean this is politically motivated?

Ravinatha Aryasingha: Who is this resolution helping? Those people who want to see Sri Lanka not get on with it and develop. Some elements in the Tamil diaspora who were part of the LTTE and who are still using the coffers of the LTTE to fund their activities and some polticians are using their support are trying to win votes. Some non-governmental groups whose whole existence very much depends on keeping the pot boiling in Sri Lanka.

It’s not only a problem for Sri Lanka today… some of this mechanisms of para ten can go anywhere. Today it’s Sri Lanka, tomorrow it can be any country. I think it’s very imp that we deal with situations and we don’t help people to interfere in our countries because if we start doing that on any one country it becomes a very slippery slope.

NDTV: Sri Lanka has been under a lot of pressure here, with resolutions coming in. This is the third time running. What do you have to say about the role India has played?

Ravinatha Aryasingha: India and Sri Lanka have had a very long relationship, it is a very rich relationship and it is a relationship in which there may have been times of turbulence but it has always been managed and I am sure in the future it will be the way it has been – very flourishing in the past.

NDTV: What about the various reports on torture, gender violence. Do you think all of these are not credible or would you accept you are facing some challenges after a long conflict of three decades?

Ravinatha Aryasingha: Of course there are difficulties in many countries. Your country has gender violence but we are all doing things about it. It’s not good and it must be dealt with but you must separate the facts from fiction and exaggeration. It must not be serving some ulterior purpose. There are statistics of what is true. Take the example of this lady who was sheltering a former terrorist cadre in her house who shot and escaped and the lady was taken into custody. What would any other country, any government worth its salt do? Due process is being followed. That lady is totally accessible to the ICRC where she is held in detention. Much was said about her 13-year-old daughter. A mother is taken into custody, there’s a 13-year-old girl, what do we do? We took her to the magistrate because there was no immediate family who took charge or her and then the magistrate decided to hand her to provision and child care. Then several people went and tried to find out things about the scene of the crime. What do you do?

NDTV: That’s another thing that has been coming up. Attacks on journalist and…

Ravinatha Aryasingha: No no it’s not, it’s not… all am saying is that when these incidents happen one has to go into the specifics of this case. This incident that I mentioned took half the time here on the discussion on Sri Lanka and I think it’s very explanable. I don’t think the government of Sri Lanka has done anything wrong. There was a real national security concern. It is logical that any government worth its salt will take these precautions because we are a country that has seen terrorism for 30 odd years. We don’t want it to happen again.

NDTV: It’s often said in these corridors at the UN Human Rights Council that countries like Sierra Leone and Cote d’Ivoire have accepted resolutions and have welcomed it so why not Sri Lanka? What would you say about that?

Ravinatha Aryasingha: I don’t comment on other countries’ affairs. It would be highly presumptuous for me to talk of another sovereign country the same way in which I feel others should not do about my country.