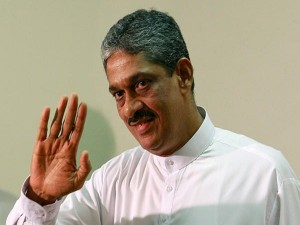 Former Army Commander Sarath Fonseka says a proper domestic mechanism should be in place to address accountability issues to ward off pressure for an international investigation.
Speaking to the Colombo Gazette after addressing the media today, Fonseka also said that the government cannot lean on countries like China and sideline other countries.
“I don’t think even the Chinese government will like that,” he said.
He said the accountability issue had damaged the image of Sri Lanka and if his party comes to power he is ready to discuss the issue with other countries and resolve the differences.

Fonseka said that the main reason the government was facing so much criticism from the west is because it had failed to live up to the very promises it made to the world.

“The international community is only asking for justice and to stop the human rights violations.  Investigations will be required if we don’t attend to these issues at home. We need to do things ourselves before anyone raises any questions. Our rulers have failed to do that,” he said.

Speaking to the media earlier regarding his party policies, Fonseka said that the Democratic Party will look at introducing a new political culture in Sri Lanka in order to address most of the issues faced by the general public.

The Democratic Party was registered yesterday as a recognized political party by the Department of Elections.

He said that district level recruitment for new members to the party will now begin and that the Democratic Party will be ready to contest the next election.

He also said that the doors will be open for any politician to join his party, even former party stalwarts Arjuna Ranathunga and Tiran Alles.

Fonseka said that he believes both Ranathunga and Alles left over some policy issues, but they can rejoin if they accept the road the party is now preparing to take.

The press conference began on a rather controversial note after some Buddhist monks refused to set next to representatives of other religions.

A separate chair was then placed for one monk who as seen later entering the press conference hall and moving his chair further away from the other religious dignitaries.

Fonseka was to later say that he is for unity among all religions and all communities.
The former army commander also asked for his civic rights to be restored. (Colombo Gazette)
Report by Easwaran Rutnam