Accountability: A grand failure of the Sri Lankan state 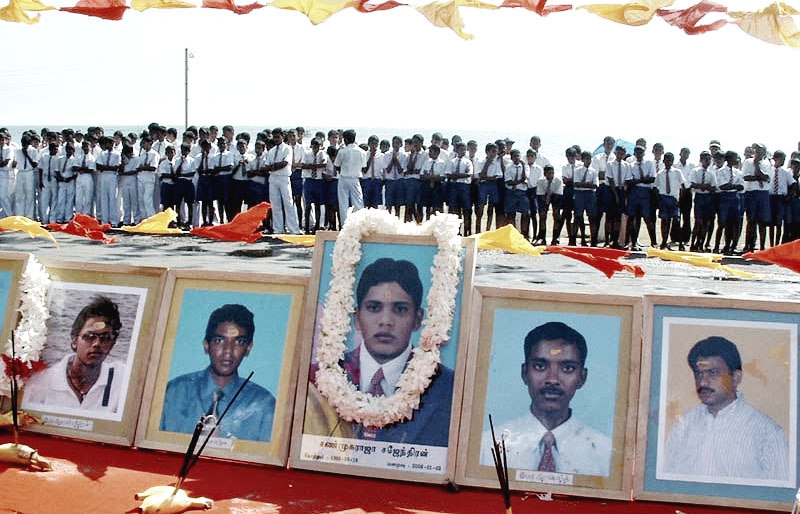 Kishali Pinto-Jayawardena
Verily, one is not sure whether to be outraged or amused by assurances made by Sri Lankan Government’s Permanent Representative this week that non-summary proceedings into the brutal killings of 5 students of Tamil ethnicity in Trincomalee during 2006 will commence in the first week of June 2013.

This statement made at the 23rd Regular Session of the United Nations Human Rights Council (UNHRC), in Geneva was presumably based on advice tendered by the Attorney General. The UNHRC was also informed that the investigation into the deaths of 17 Action Contra L’ Faim (ACF) aid workers, who were shot at point blank range at their office during that same year in Mutur, is continuing.

We have been hearing these claims for quite a while. Indeed, this appears to be part of a monotonously standard response that is trotted out by state representatives each time that the Geneva sessions come around.

Insincere promises and lack of political will

The Mutur and Tricomalee incidents involved calculated and cold blooded executions of civilians occurring seven years ago during the thick of the conflict in the East. Despite tremendous public shock at that time, the Government declined to properly investigate let alone prosecute the offenders even though the circumstances were opportune, at least in the case of the executions of the students in Trincomalee. In the ACF case, serious deficiencies were demonstrable in the judicial process such as the transfer of the case from the Magistrate of Mutur to the Magistrate of Anuradhapura (for which differing reasons were given by state officials), lack of due diligence in the preservation of the scene of crime and omissions in the forensic process, including breaking of the chain of custody.

Now we are being informed with all pomposity of the grand step of a non-summary being initiated in one instance. In the other, we are told that the investigations are ‘continuing’. It is a classic example of adding insult to injury no less.

Impact not limited to a few individuals

The impact of these two cases is not limited to the devastation caused to the family members of the victims. Rather, as Premawathie Manamperi’s rape and murder during the first Southern insurrection came to symbolize the atrocities committed at that time by a Sinhalese government against the Sinhalese people in the name of crushing an insurrection, the Trincomalee students case and the ACF murders symbolize the cry for justice of innocents of Tamil ethnicity during the last years of the conflict.

Resolving these cases through a proper working of the Sri Lankan legal system would have brought goodwill to the Government itself. So would acknowledging that atrocities happen during war and making an apology to the family members of the victims. Instead, we have cynical role playing which fools no one, least of all the UNHRC.

And where pray is the Government’s adherence to the recommendation of the Lessons Learnt and Reconciliation Commission (LLRC) which strongly advised that the report of the Udalagama Commission which investigated these murders, be released? Even if the assurances that the killings are being investigated ‘pursuant to recommendations made by the LLRC’ are taken at face value, only part of the LLRC’s recommendations thereto are being implemented. This is an important point that ought not to be lost sight of.

Why is the Government reluctant to release the Udalagama report?

The Udalagama Commission was headed by a former Supreme Court judge and constituted under warrant by President Mahinda Rajapaksa. It sat for many months inquiring into mandated cases of human rights abuses before it was unceremoniously wound up with its mandate uncompleted. Its report remains unpublished. So like the proverbial Pandora’s Box, are we to assume that publicizing its contents would open up all evils for this country? Are the Commissioners presumed to have thrown all discretion to the winds and embarked on a reckless condemning of State actions?

Certainly it requires a remarkable stretch of imagination to conceive of such an eventuality. Given the general thrust and trend of these reports by Sri Lankan Commissions of Inquiry typically tend to err on the side of caution rather than function as bold purveyors of the truth akin to their Latin American counterparts. Further, even more than past Commissions, the Udalagama Commission faced considerable structural problems (lack of timeliness, lack of an effective witness protection system etc) and provoked concerns as to its independence from the Government and from the Department of the Attorney General. It was assuredly not an ideal example of a dynamic fact-finding body.

Why is this Government guilelessly prevaricating in regard to the release of the Commission Report for so long? The continued ignoring of a simple and commonsensical suggestion by the LLRC, again the Government’s own proudly touted ‘homegrown’ Commission is mysterious, to say the least.

A State’s legal responsibility
Leaving the Udalagama Commission aside, State responsibilities in regard to the Mutur and Trincomalee killings are very straightforward under the domestic law as well as international standards. There can be no justification for the killing of civilians and a defence by state agents that relies on orders from above cannot be upheld.
In fact, as was held in the very case concerning the rape and murder of Manamperi, a soldier cannot be penalised when he disobeys an order which is manifestly and obviously illegal, such as shooting a helpless and unarmed person. And when a state of emergency is called, the ordinary civil law of the land cannot be regarded as pro tanto suspended, thus entitling the military to engage in whatever acts of brutality in pursuance or supposed pursuance under emergency powers conferred on them (Wijesuriya v the State, 77 NLR, 25).

In terms of international standards meanwhile, Sri Lanka is directly responsible for its failure to meet positive obligations to prevent and punish certain serious violations such as arbitrary violations of the right to life even if the acts are carried out by non-state actors. A State party has a responsibility to investigate extra judicial executions, to bring to justice those responsible for disappearances, and to provide compensation for the victims’ families. These are all fundamental duties on the part of the Sri Lankan State in regard to which it has resoundingly failed.

Crimes that resonate in our conscience

At a time when the 13th Amendment is generating more heat than reason, it seems surreal to (for example) be occupying oneself with the virtues or ills of devolving police powers to the provinces when the entire national policing process has become so degenerate in the first instance. Let alone extraordinary crimes, police functions in regard to the ordinary law and order process have become exceedingly politicized. The recommendation of the LLRC that the Department of the Police should be delinked from the Ministry of Defence continues to be disregarded by the Government. The National Police Commission is a farcical shadow of its original self under the 17th Amendment. In its present form, it merely swallows up public funds and performs no useful function.

Effective investigation and prosecution of cases such as the Mutur and Trincomalee killings is therefore well nigh impossible, notwithstanding flamboyant promises held out by this country’s representatives abroad. Yet it is also quite clear that these are crimes that resonate in the conscience of this nation. And the victims will not be forgotten as much as the disappeared Sinhalese schoolchildren of Embilipitiya were not forgotten until their cases were heard and a measure of justice ensured. That much must be said.
– Courtesy Sunday Times