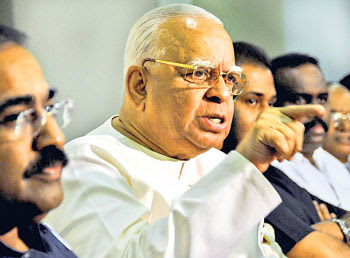 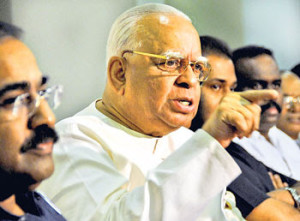 Kath Noble
Mahinda Rajapaksa must really love elections. Since he came to power, at least some part of the country has gone to the polls almost every year, sometimes more than once.

I hope that it will be the turn of the Northern Province.

Concerns have been raised about the prospect of a TNA-led administration in the North, on the basis that the party may use the platform to push for more devolution or even a separate state, by itself or with the support of the West.

Indeed it might. The TNA hasn’t done enough to distance itself from the use of violence to achieve political ends, or to distance itself from the goal of Eelam. Both would have been helpful for its constituency and for the country, since distrust of the TNA’s intentions encourages or is used as an excuse by the Government to delay the much-discussed ‘political solution’, or to avoid it altogether. Perhaps the TNA is under pressure from the diaspora, or maybe it is yet to be convinced that the war is over.

Whatever, keeping it out of power by undemocratic means isn’t going to convince either the party or its supporters to change their ways. The voters of the Eastern Province demonstrated as much on September 8th.

There have been many fascinating attempts in the media to present the results of the provincial council elections in the East as a resounding endorsement of the Government and its policies. However, this is no more than wishful thinking.

For a start, the UPFA won by a margin of less than 1%, receiving 31.58% of the popular vote compared to 30.59% for the TNA. Given the usual massive abuse of state resources by the incumbent administration, it is ridiculous to suggest that people are anything like enthusiastic about Pillayan et al staying on at Trincomalee.

Also and most importantly, while the UPFA’s vote share fell by well over 10% of the total, the TNA’s went up by nearly 10% – it secured only 21.89% of the popular vote in the 2010 parliamentary elections. The TNA now enjoys the support of the vast majority of Tamils in the East. And it got eleven Tamils elected to the provincial council, compared to only one from the UPFA (the former chief minister, whose achievement has been questioned).

Being out of office clearly isn’t a problem for the TNA in terms of popularity.

Of course it isn’t. While the Government insists that life is now very good in the former conflict areas, a lot of people living there don’t agree. They aren’t so hopeful about Mahinda Rajapaksa’s development agenda. This we know from many sources, including the fact that according to official figures, 2,992 Sri Lankans crossed the sea to Australia in the first eight months of this year, compared to 736 in the last twelve months of the war. The vast majority of them were Tamils.

And this data includes only those who reached their destination, not those who are now being caught by the Navy on an almost daily basis. Everybody is debating whether or not they should be classified as refugees, as if it would be quite normal for so many people to want to undertake such a perilous journey for economic reasons – it is not.

In the North, the TNA will be the sole beneficiary of dissatisfaction with the Government. The party has its faults, but at least it won’t put up any more signboards in Sinhala and English in areas where Tamils make up 100% of the population. (I am taking a trivial example not because there aren’t more important things to be done, but to demonstrate that it is will as much as ideas and resources that is lacking.)

The TNA must know that its prospects are only going to improve the longer it is prevented from challenging the Government, so it isn’t going to feel at all pressured to fall into line.

The other point to note from the East is that the SLMC too increased its vote share. At the 2010 parliamentary elections, the SLMC and UNP together achieved 26.57% of the popular vote, increasing to 32.80% in 2012. The ever-hopeful supporters of Ranil Wickremesinghe may like to think that the UNP is the party whose fortunes improved, but that is plain silly.

It achieved 11.82% of the popular vote in the provincial council elections, compared to 20.98% for the SLMC. And for their information, 11.82% is pretty close to zero! The UNP is in a deep hole, electorally speaking, but it is hard to feel sorry for people who believe that clinging to the same leader for nigh on two decades is perfectly normal.

If only their foolishness didn’t have such an impact on the rest of the country.

It is equally clear that the SLMC would not have had seven provincial councillors if it had run under Mahinda Rajapaksa. The party leadership’s rumoured decision to form an administration with the UPFA, going against the wishes of its members from the Eastern Province and likely also the views of its voters for the sake of concessions in Colombo, is not very democratic.

Totally undemocratic are the moves reported by DBS Jeyaraj to persuade five of the eleven provincial councillors from the TNA to switch their allegiance to the UPFA, which if they had been successful would have given the Government its all-important majority without the need for the support of the SLMC.

DBS Jeyaraj says that the TNA representatives were approached by military intelligence operatives with a range of ‘carrots’ and ‘sticks’, including the offer to one provincial councillor who is also a building contractor of a major state infrastructure project and the threat to another that his young son would be taken into custody for alleged involvement with the LTTE.

As DBS Jeyaraj points out, attempts to engineer crossovers are nothing new, although the employment of military intelligence operatives certainly adds a novel and even more reprehensible dimension to the phenomenon.

Also, we don’t normally get to hear the details of the ‘carrots’ and ‘sticks’.

For this we should be grateful to the TNA. It has shown us what politics in Sri Lanka has become, and how difficult it will be to clean up – Mahinda Rajapaksa is clearly very good at engineering.

I hope that we will find more reasons to thank the party once elections are called in the North.

Although the TNA did not stand up to Prabhakaran, for which it deserves the harshest of criticism, it is willing to stand up to the Government. And it would be in a position to do so in the Northern Province.

A TNA-led administration could do what most Sri Lankans now agree is necessary and show the Government that it cannot get away with everything everywhere. The danger for the TNA and indeed for Sri Lanka as a whole is that as things stand its positions and actions can easily be dismissed as sectarian and extremist, which could end up deepening the divisions in society and further entrenching the Government.

For that reason, and of course also as a matter of principle, the West should firmly resolve to say and do absolutely nothing.

It is only a matter of time before Mahinda Rajapaksa starts to fear elections.
DBS