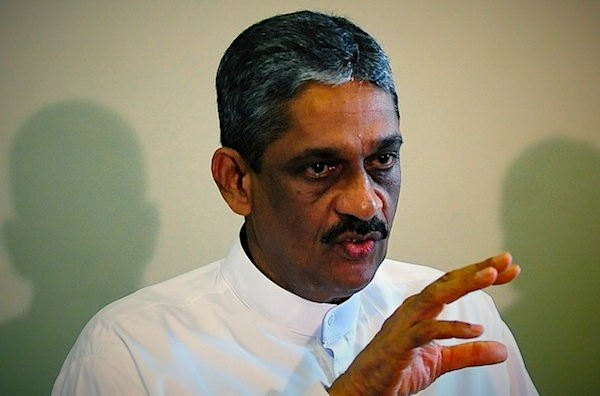 Former Army Commander Sarath Fonseka charged that it was clear that the Army major who had complained that he had been assaulted by Malaka Silva withdrew his complaint under duress.

“This is another classic example of the situation prevailing in this country. The whole country, including the Army, know that this major was assaulted by these thugs. Now if it has come to a stage where the major has given an affidavit. It must have been done under duress. During the earlier stages of this incident it was known that when Malaka Silva wanted to return the pistol to him, he refused to take it. So now you can see what is happening in this country” he said.

Fonseka said that all military men were saddened by this turn of events.

“Everyone is very unhappy, officers down to the soldiers have spoken to us and they are very unhappy at the turn of events. Everybody knew that the culprit would get away and this would be the final outcome. The military is very unhappy. They want to see justice done by their comrades. Those people will be waiting for justice to be done one day” he said.

The former presidential candidate and leader of the Democratic Party said that it was not irregular for an Intelligence Corps officer to carry a pistol while off duty.

“On the other hand, when the Army appointed a court of inquiry to fix the major, to say that he was in the wrong place, that he was carrying a weapon in the wrong place, the only way out for the major is to say that the incident never took place. The Army has thus, indirectly put pressure on the major to withdraw his complaint. The major’s having a pistol with him when he was off duty was not irregular. Majors in the Military Intelligence Corps are permitted to carry their pistols even when they are off duty for their personal protection “he said.

Fonseka went on to state that those in power were “deaf and blind to crimes that take place in the country.”(Hafeel Farisz)
http://www.dailymirror.lk/top-story/22032-complaint-withdrawn-under-duress-sf.html