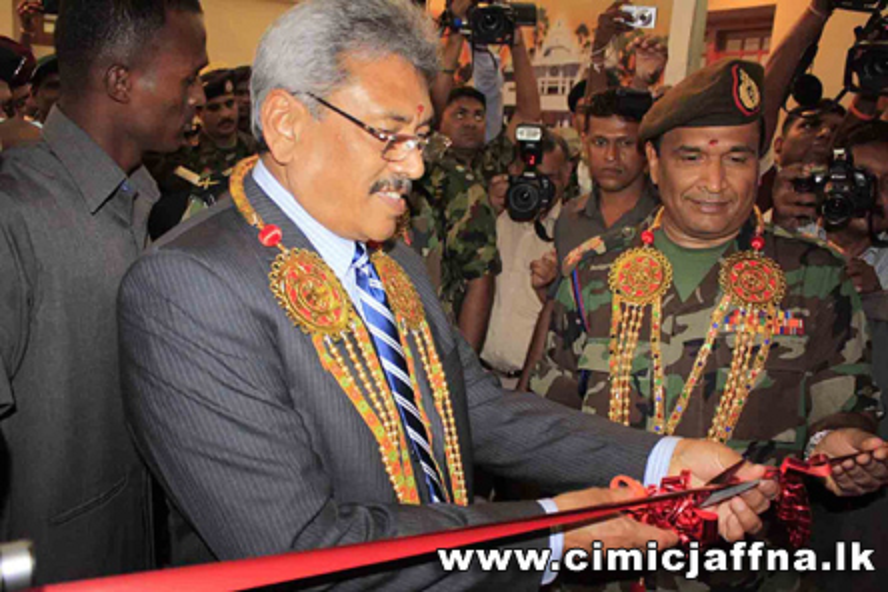 Image: Alugosuwa with his mentor – File Photo ( Caption from the original article)

A staunch supporter of former president Mahinda Rajapaksa has published an article which speaks about Presidential aspirant Gotabhaya Rajapaksa’s Alugosuwa in Jaffna.  Alugosuwa is  the Sinhala word for Hangman and  colloquial word for killer.

K.T. Rajasingham, the author and publisher of the article was  a member of the Sri Lanka government delegation to UNHRC in 2012.

In word, it is no more than God’s retribution; it is punishment for the sins committed on the Tamil Lankans. Nothing more, nothing less.

Gotabaya’s hangman of Sri Lanka, or the Alugosuwa, as the Portuguese like to call their executioner, is paralysed, and is lying alone in Ward Number 17 of the Army Hospital in Colombo. He has experienced blackouts a couple of times.

Last week, during one such blackout, he collapsed in the bathroom, and suffered a serious head injury and admitted to the Army Hospital in Colombo. He was immediately shifted to the Asiri Medical Hospital, where doctors conducted an operation to check internal haemorrhage. He is still not out of woods, though he has since been brought back to the Army Hospital for follow up medical care, according to reliable sources.

The news right now is that the ‘Black sheep’ who had brought bad name to the Sri Lanka Army amongst the Tamils, desecrated a few dozen Hindu Temples, and involved in abduction, torture, and killing of several Tamils after the end of the armed conflict in April 2009, is bound to the wheelchair.

The former Army officer has been at the centre of several frauds and scandals. He was investigated under the Serious Acts of Fraud, Corruption and Abuse of Power, State Resources and Privileges (PRECIFAC). The probe body presented its report to President Maithripala Sirisena on Jan 2, 2018.

Major General Mahinda Hathurusinghe was the Commander, Security Forces, Jaffna, for four years, from 7 Jan 2010 to 7 Jan 2014. And in that capacity, he had unleashed a reign of terror. Yet surprisingly, four years after he was forced to relinquish the Jaffna post, on Jan 10, 2017 to be precise, the Sirisena government made him Adjutant General at the Army Headquarters.

People of Jaffna have publicly indicted the Major General. The occasion was the funeral of Chief Sanganayaka, Northern Province and Chief incumbent of the Jaffna Naga Vihare, Ven. Meegahajandure Gnnanarathana Thero, on Dec 23, 2017 at the Jaffna esplanade – Muttaweli. He passed away on Dec 19, 2017.

In his funeral oration, this writer – K.T. Rajasingham dubbed Major General Mahinda Hathurusinghe as one of the bad eggs within the armed forces who had contributed to the idea of subjugations of the Tamils. As Security Forces Commander of Jaffna, he had unleashed a reign of terror for four years. It was a common secret that he was responsible for breaking and destroying several Hindu temples in the Jaffna district, especially the temples in the Security Zone.

Rajasingham pointed out that the Major General was deeply involved in the scandal that had rocked Kankesanthurai Cement Corporation. The issue figured prominently in the probe carried out by PRECIFAC commission. The charge was that Mahinda Hathurusinghe had ripped and sold as scrap millions of dollars’ worth machineries in the factory. The probe body severely indicted him in its report. Surprisingly, the President has not order action against him as yet. Mum is the official word, in fact.

The President may not have taken action against the Major General Mahinda Hathurusinghe, but the turn of events show that God has not taken kindly to this Alugosuwa of Sri Lanka and has made him pay for his sin in this world.

Therefore, those who played with the lives of the Tamils – Beware of certain God’s Retribution – Righteousness Will Always Win.