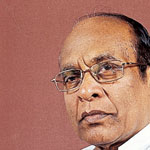 ‘SEC should be strengthened without delay’
‘Monitor EPF investments carefully’

Parliamentary Committee on Public Enterprises (COPE) Chairman D. E. W. Gunasekara yesterday (07) urged the authorities to strengthen the Securities and Exchange Commission (SEC) in order to take down the influential group of investors who were operating a ‘mafia’ in the Colombo Stock Exchange.

The Chairman and top officials of the SEC were summoned before COPE yesterday where the committee grilled them on recent developments in the capital market and other details concerning the financial accounts of the SEC.

“We had a frank discussion with the officials of the SEC and the (COPE) committee was happy and satisfied with its performance. We are convinced that there is a mafia running the country’s stock exchange and we believe the SEC should be strengthened further to tackle this problem,” Gunasekara told The Island Financial Review after the meeting.

“The SEC Act has to be amended to give the regulator more powers to deal with this mafia and we believe this has to be done without any delays. We asked the SEC to work on the draft amendments as a matter of priority and present it to parliament,” he said.

Gunasekara told The Island Financial Review that the COPE was convinced that a mafia was operating in the country’s bourse and this was also impacting the economy.

“We need a strong regulator not only because it is good for the stock exchange, but because it would be good for the entire economy. We believe that 88 percent of total market activity is triggered by a few investors, and that some of them with certain broker firms are playing the game (marker malpractices). The number of minority shareholders active in the market is negligible and we need to attract more investors from the public,” Gunasekara said.

He said the SEC should continue with its ongoing investigations into market malpractices and that the COPE would support it.

“We have to appreciate the role the SEC played in nullifying this deal, despite the severe pressures it was facing from some quarters in doing so. Luckily a public institution was involved, if it was two private entities then nothing would have happened.”

Sources said the SEC had told COPE that it was the Central Bank which had jurisdiction over the EPF.
IS

SEC’s independence from Executive comes up at COPE meeting

Independence from the Executive for the Securities and Exchange Commission (SEC) and greater powers as well as regulation were among issues which had surfaced at yesterday’s meeting between the capital market regulator and the Committee on Public Enterprises (COPE) as exclusively reported by the Daily FT.

The need for a hands-off approach by the Executive (the President who incidentally by virtue of being Minister of Finance is also the appointing authority of the SEC Chairman and some commissioners except Ex-Officio members) had come up in the course of the deliberations when the COPE members had raised various issues connected to the ill-fated and reversed NSB-TFC deal on the Colombo Bourse as well as ongoing investigations.

Although COPE’s summoning of the Chairman and Commissioners was with regard to the Auditor General’s observations on the SEC’s 2010 Annual Report, the ensuing discussion had mostly focused on policy issues, the degree of investigations and malpractices as well as the overall state of the stock market, its integrity, revival, investor confidence and interest of small investors.
“The overall effectiveness of the regulation was discussed in the context of the rising number of complaints and the progress of investigations,” an MP who attended the meeting said. SEC had maintained that powers vested under its Act weren’t sufficient and had referred to the draft of new amendments. Whilst it was noted that fresh legislation would take time, the COPE meeting had focused on what the SEC could do in the interim as well.
Questions specific to NSB-TFC deal were many. They included why the transaction was reversed, if Treasury had disowned itself from the NSB transaction who was responsible, why allow trading of stocks with negative net worth and whether the SEC wasn’t independent to take effective action against perpetrators.

The SEC response had been, “it had no other option” but reverse to ensure stability since there were conflicting actions by parties involved. SEC had also said whilst some early action had been taken, the outcome of the on-going investigations will be made public before end of the month.

When asked whether the SEC would have followed the same course if the transaction involved two private parties, the answer had been “no”.
In that context, the discussions had centred on whether SEC was independent or not. Indications from SEC and inferences via questions from the COPE members pointed to the lack of independence.

COPE members had emphasised that with regard to a regulatory institution, independence means freedom from any influence from the Executive as well. Questions were also raised regarding the recent meeting convened by President Mahinda Rajapaksa  with capital market stakeholders.

According to sources, COPE Chairman D.E.W. Gunasekara had said that he too espoused the need for the SEC to be independent and that he would convey the same to President.

Since the SEC Commissioners are appointed by the Government and dependent the issue of how it could remain independent from the Government or autonomous had surfaced. One suggestion was whether SEC could become directly answerable to Parliament like Auditor General.

The issue of state agencies playing the stock market with specific reference to EPF as well as white collar crime in general and the losses incurred by retail investors was also raised by COPE members. Reference to mafia and some media too had come up though there was no namedropping.

Among the COPE members there were different views with regard to regulation and manipulations as well as that the regulatory aspect wasn’t the sole cause for the market’s downturn but issues such as macro economic conditions in the country, regional and global developments were also to blame.

An MP had asked whether SEC was merely barking without being empowered to bite. The SEC had maintained that the market wasn’t over-regulated but under-regulated, hence its powers must be beefed up to maintain a proper regulatory environment and enforcement regime free of interferences. Some COPE members had commended both SEC Chairman Tilak Karunaratne and his predecessor Indrani Sugathadasa for standing their ground courageously despite outside pressure and influence.

A COPE member described the meeting as “very revealing” but given the overall status quo of the market in terms of regulation and performance it was “saddening.” Another said some actions are required by SEC and depending on the progress, COPE will decide on its future course with regard to capital market regulator.
FT