A campaign against a new Geneva resolution on Sri Lanka at the HRC 40 launched by retired service commanders. 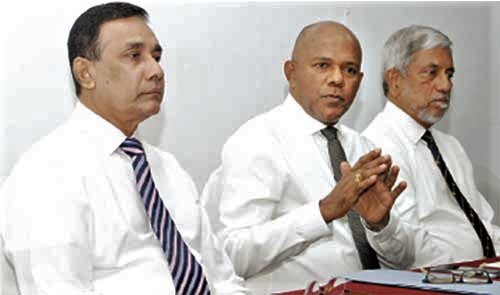 Holding a press conference in Colombo yesterday (20 Feb)  three retired service commanders, Air Chief Marshal Roshan Goonetileke), Admiral Tisara Samarasinghe and General Daya Ratnayake said that the war winning military was being penalised in terms of the Geneva Resolution co-sponsored by the government, in Oct 2015.  In their speeches that requested the requested that the President Maithripala Sirisena, should intervene to ensure those who risked their lives were treated with dignity and honour.

A news report published by the Island on covering the press cnferences follows:

They requested President Maithripala Sirisena, who is also the Commander-in-Chief of the Armed Forces, to intervene to ensure those who risked their lives were treated with dignity and honour.

Goonetilleke, who also served as the Chief of Defence Staff (CDS) after the conclusion of the war emphasised that post-war national reconciliation couldn’t be achieved at the expense of the armed forces.

Retired service chiefs called a special media briefing at the Sri Lanka Foundation Institute (SLFI) to bring to public attention what they called a relentless campaign directed against some individuals.

Air Chief Marshal Goonetileke said that those who could not stomach the LTTE’s defeat in May 2009 were seeking revenge. They had conveniently forgotten how the armed forces had treated members of the defeated terrorist organisation. Goonetileke said that in spite of losing his own brother the then Wing Commander Shirantha Goonetileke on April 29, 1995 as a result of a missile attack, he felt the need to move forward.

It was a special Avro flight to Palaly from Ratmalana via Anuradhapura carrying 49 security forces personnel and three journalists.

Over 12,000 members of the defeated group had been rehabilitated and released within years after the conclusion of the war, Goonetileke said. Unfortunately, the losing side was not interested in genuine post-war national reconciliation. Instead, they continued to propagate unsubstantiated allegations almost a decade after the restoration of peace, Air Chief Marshal Goonetileke said.

General Ratnayake regretted the powers that be disregarding the tremendous sacrifices made by the armed forces. Acknowledging that those who had acted in violation of the law had to be dealt with, the former Army Chief emphasised that it was not the policy of the government to deliberately target civilians.

Urging the government not to go after the military to appease those foreign powers responsible for Geneva Resolution against Sri Lanka, General Ratnayake said that they were seriously concerned about the ongoing operation targeting the military.

General Ratnayake recalled the role played by Admiral Karannagoda during the conflict. Karannagoda changed the primary naval strategy in place at the time and taken action to destroy the floating LTTE arsenals on high seas.

Ratnayake explained how short-sighted policies adopted by current government had deprived Sri Lanka of post-war economic and political stability much to the disappointment of the members of all communities.

by Shamindra Ferdinando /The Island