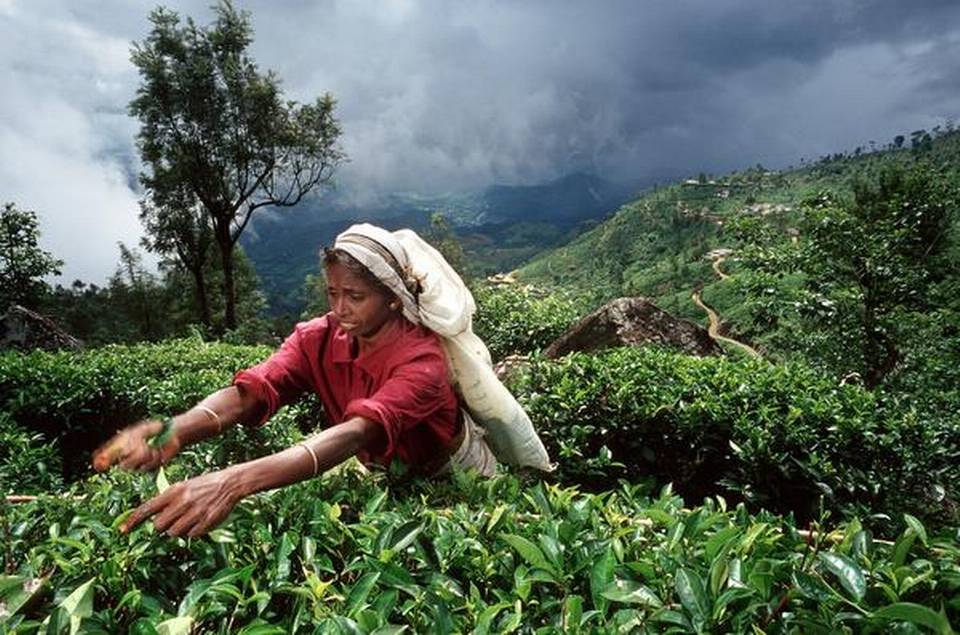 “For three years now, Sri Lanka’s tea estate workers have been agitating for a daily basic wage of LKR 1,000.” A tea estate worker in the Dambatenne tea plantation in Haputale, Uva Province.

Often described as the backbone of the economy, close to 1.5 lakh tea estate workers have been agitating for fair wages for the last three years. Ahead of Sri Lanka’s presidential election in November, which the labourers see as another season of empty promises, Meera Srinivasan reports on how they view their struggle
“Half the blood in our bodies is sucked by these leeches. Can’t someone find some medicine to keep them away?” At first it is hard to locate the voice that is emerging from the bushes. A few feet off the road margin, at a slightly higher elevation is a worker, with her head alone visible over the lush green leaves. “They get all over us even if we smear a packet of salt,” the worker says, as she continues to pick leaves at an estate near Hatton in Nuwara Eliya district of the Central Province in Sri Lanka.

“What she says is very true. I was hospitalised because of this,” says B. Devika, another worker, pointing to the many scars on her feet ravaged by hungry parasites. “It is so painful even now,” says the 36-year-old mother of two.

Leeches are only part of the problem for hundreds of women like them who work in the tea estates located in the hill country. The women’s hands move rapidly, as if in circles, picking tender tea leaves from the top of bushes. In a matter of seconds, as their palms brim with leaves, they reach out to the bags hanging from their shoulders and empty the leaves into them — a recurring action whose rhythm they have mastered, knowing well that their labour and speed is money, even though the money is far from fair. After a prolonged struggle for fair wages, the workers who sustain Sri Lanka’s economy are tired.

For three years now, Sri Lanka’s tea estate workers have been agitating for a daily basic wage of LKR 1,000, which they think is reasonable compensation for their backbreaking work of picking 16-18 kgs of tea leaves a day over eight hours. While their labour remains largely invisible, its outcome, the famous, flavourful Ceylon tea, has, for decades, brought Sri Lanka global recognition and valuable foreign exchange — over $1.4 billion according to official data for 2018. About 1.5 lakh people from the million-strong community are engaged in direct labour in the estates.

Frustrated with their stagnant wages and spiralling living costs, tens of thousands of workers joined the ‘1,000-rupee wage’ struggle, one of Sri Lanka’s biggest worker mobilisations in recent history, both in its show of strength and geographic spread, in plantations across the island’s Central, Uva and Southern Provinces.

On October 24, 2018, their protests – which began nearly two years earlier – culminated in a massive demonstration at Galle Face Green, Colombo’s iconic sea-front promenade. Thousands of Malayaha (hill country) Tamils now living in Colombo, and others in solidarity, mobilised largely through a social media campaign. Wearing black they raised slogans against the ongoing exploitation of their community.

This exploitation began two centuries ago, when the British brought down labourers from south India, mainly Tamil Nadu, to work in the plantations. Post-colonial Sri Lanka proved it was not too different in its treatment of the Malayaha Tamils – disenfranchising them and even rendering them stateless. The community has had to constantly fight back to be visible and counted — for citizenship until 2003, for land and housing rights, and for a decent wage in the last few years. While their labour gave the tea workers their identity, it is their resistance that has won them even basic rights incrementally, though not adequately.

In January this year, trade unions and employers signed a new collective agreement, approving a 40% raise, to LKR 700 (roughly ₹275), still LKR 300 short of the amount the workers had emphatically demanded. The government later promised an additional LKR 50 to the basic wage, which workers are yet to receive.

The many rounds of unsatisfactory negotiations and numerous promises that politicians have made have left workers with one conclusion on their struggle — it was “a failure”. “What else do you call something that didn’t lead to our desired outcome?” asks Devika. “It made us realise that there was no point in trusting any trade union leader or political party any longer. Ultimately, they side with the employers.”

The agitations have stopped in the plantations, though small groups of sympathisers in Colombo continue to hold sporadic demonstrations, still demanding LKR 1,000.

‘They made us pawns’

Their history and past experience have taught workers to expect little from political leaders — those of their own community and others who hold power in Colombo — but the October struggle revealed something even starker. Two days after their big Colombo protest, Sri Lanka witnessed unprecedented political turmoil that paralysed its administrative system. On October 26, President Maithripala Sirisena sacked Prime Minister Ranil Wickremesinghe, and controversially installed former President Mahinda Rajapaksa in his place. In the following 52 days of the country’s infamous constitutional crisis, the questionably dislodged Prime Minister and Cabinet, and their purported successors desperately clamoured for support from different quarters. At that time, the hill country political leadership on both sides — the Ceylon Workers’ Congress aligned to the Rajapaksas, and the Tamil Progressive Alliance that is part of Mr. Wickremesinghe’s government — hurriedly put out messages promising a 1,000-rupee basic wage.

“We knew they were all using us as pawns. We knew nothing would come of it. And we weren’t wrong,” says P. Sivakumar, an estate worker. “The promise of a fair wage of LKR 1,000 is Sri Lanka’s best-known story of deceit,” he says, emptying his sack of tea leaves by the roadside, where workers wait in line to have their bags weighed. The men are also part of the predominantly female workforce, often engaged in part-time labour in the plantations.

With the marginal increase in wage earlier this year, most plantation companies cut a performance-linked incentive of LKR 3,000 a month for 18 days of work that was earlier paid, according to the workers. “As they increased the wage a little on the one hand, they quietly cut the incentive on the other. They forget that the wage we get is for our children’s education, our family’s medical needs, expenses for weddings, or travels for a funeral. What is LKR 750 today,” Sivakumar asks.

The revised wage is hardly enough, according to a 2018 study by academics at the University of Peradeniya. “Taking current living costs into consideration, we found that a worker needs a living wage of at least LKR 1,108 to live with basic dignity. In the one year since the study was prepared, the cost of living has gone up further,” says Professor S. Vijesandiran, head of the Economics and Statistics Department at the University of Peradeniya. “The 1,000-rupee basic wage demanded by workers was already less than a fair living wage, and now the companies have got away with paying just 750,” he says. The wage would at best add up to LKR 855, workers say, if employers’ social security contributions and performance-based incentives are added.

The Regional Plantation Companies (RPCs), which manage and control the estates and people living on them after government divestment in the 1990s, maintain that the tea production industry would collapse if employers are forced to pay a 1,000-rupee basic wage. In December, the RPCs claimed that the strike action had cost them a collective loss of LKR 6 billion per month.

They voice concern over low tea production, attributed to a host of factors including adverse weather and a three-year ban on weedicide glyphosate. The ban was subsequently lifted last year, for the tea and rubber sectors, after planters appealed to the government saying the fields were overgrown with weeds, severely affecting production and costing the country up to LKR 20 billion in annual losses. The move seems to have helped increase yield. According to Sri Lanka’s Tea Exporters Association, 184 million kgs of tea was produced from January to July 2019, showing a gain of 1.9 million kgs compared to the same period last year.

In addition to the challenge in increasing production, plantation companies point to a declining workforce and a fall in global prices, effectively conveying a message that a wage hike beyond LKR 750 is non-negotiable and virtually impossible. Further, the producers and exporters are mulling “out of the box solutions” to their crisis — seen in experiments with the “out-grower model” of production, where workers are leased small plots of land for tea production; or are engaged for “quick cash” — a slightly higher daily wage rate without statutory social security benefits or formal contract of employment.

The government on its part is throwing its weight behind the industry. The Sri Lanka Tea Board recently announced launching a $50-million global campaign to promote Ceylon Tea in Moscow, and plans to take it to at least 11 other key markets. It has termed the campaign the biggest in the 150-year-history of Ceylon Tea.

While efforts of the state and private sector continue to boost the tea industry, neither sector has given a convincing explanation to workers about why their wages alone can’t be increased suitably. According to Vijesandiran, ever since the once state-owned plantations were privatised, there has been a wage revision once every two years. “This year’s raise must be one of the smallest increments in their history,” he says, “that too in the wake of a widespread protests by the workers”.

When public sector employees go on strike, there is seldom any impact on their monthly salary. They may take to the streets day after day, but at the beginning of the following month they still receive their salary, unlike estate workers who must forego their daily wage for each day of protest. Their dissent heightens their precariousness, he explains. “I’m still repaying the LKR 15,000 loan I borrowed at that time [of the protests]. We went for weeks without wages. We felt it was important to be part of the struggle. Anyway, it is all a waste now,” says S. Parameswari, a worker, voicing protest-fatigue that is frequently heard in the estates.