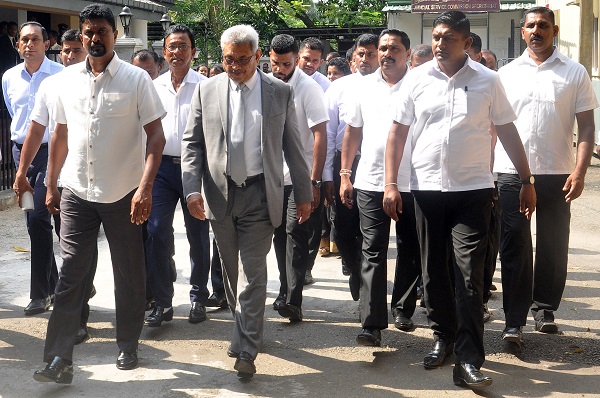 Thenuwara, a long-time social and political activist was one of two petitioners who mounted a legal challenge to Gotabaya’s right to contest the election as doubts have been raised in the public sphere as to how he obtained his dual citizenship and then full-Sri Lankan citizenship.

The petition was heard over three days by the Court of Appeal, which on Friday Oct 4 evening dismissed the case. The full order detailing the reasons for the dismissal has not yet been released and it is yet not clear whether the Court has validated Gotabaya’s citizenship or not.

Thenuwara said that he has received numerous telephone calls threatening him, and on one occasion a three-wheeler driver who drove past him had screamed threats.

He said he is in contact with the Police who have offered him protection.

Gotabaya’s party has framed the legal challenge by Thenuwara and fellow-activist Gamini Viyangoda as an attempt to stop his candidacy. The Party Chairman Professor G L Peiris described the case as a “plot” to prevent Gotabaya winning the November 16th election.

With the facts as presented to the Magistrate’s court in the on-going investigation into how Gotabaya obtained US-Sri Lanka dual citizenship even before a Cabinet was appointed in 2005, it is clear there is no “plot” against the candidate.

Certainly, many Sri Lankan would dearly like to know how that miracle took place through our consistently lethargic and usually incompetent bureaucracy.

Or was it because our officialdom was intimidated into performing a task for which they took extraordinary short-cuts due to intense political pressure?

Sri Lankans need to know how such things are done, surely without due process. In the interest of the country, we need honest upright officials who follow the letter of the law and not circumvent it.

He is, and has been, a breakout political activist who has protested against the doings of most former regimes in this country.

He has used his considerable talents as an artist to protest against a host of things. Most famously inventing “Barrelism” in which he used the barrels placed before the formerly ubiquitous Police and Military checkpoints across the land in the foreground of his paintings to raise his voice against militarism.

A walk through the Saskia Fernando Gallery in Colombo will immediately hit the observer with his art which attacks and exposes the hypocrisy in our society, and the dark evil forces that inhabit this island.

So Thenuwara is not “plotting” against Gotabaya, he is just being Thenuwara, asking awkward questions as any observant and concerned citizen should.

It is disturbing that Thenuwara is being treated like this.

A citizen surely has the right to ask the questions that these two men have asked.

They should not be living in fear because of that.