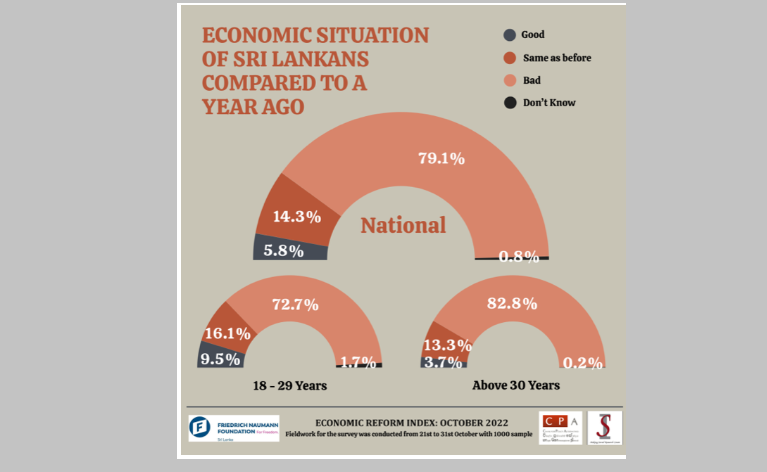 An island wide survey conducted by the Colombo based Centre for Policy Alternatives shows that economic situation of  an overwhelming majority of Sri Lankans (79%) has got worse compared to what it was a year ago. This island-wide survey has examined public opinion on the current economy, and economic reforms discussed over the past few months. Fieldwork for the study was conducted from 21 October to 31 October 2022.

The survey has not dealt on the issues of corruption, governance  and rule of law which has direct bearing on the peoples’ economic situation.

Its findings are  given  in an executive summary:

Economic Situation Compared to a Year Ago

• An overwhelming majority of Sri Lankans (79%) claim that their economic situation has got worse compared to what it was a year ago. This view is shared by Sri Lankans from varying occupations. Especially those who are self-employed (90%) and also those who work in the private sector (83%) are feeling the economic burden slightly more compared with the other sectors.

• Three quarters of Sri Lankans (75%) believe that the IMF assistance will enable Sri Lanka to overcome the current economic crisis. Notably, one-fifth of Sri Lankans are very optimistic about this approach.

Awareness and Perception on the UN Resolution

• Close to half of Sri Lankans (46%) state that they are aware of the UN resolution passed on Sri Lanka in Geneva on 6 October 2022.

• Out of them, a majority (76%) state they are aware that the resolution also demands the government of Sri Lanka to address and be accountable for the ongoing economic crisis. Awareness and Perception on the Proposed Inland Revenue Amendment Bill

• A slight majority (54%) are aware of the Inland Revenue Amendment Bill proposed by the government. From those who indicate that they are aware, 64% disapprove of it.

• The survey findings highlight that a majority of Sri Lankans trust Dr. Nandalal Weerasinghe, the Governor of the Central Bank (57%) to do the right thing in resolving the current economic crisis.

• Ranil Wickremesinghe, the Finance Minister is the second most trusted (45%), whilst Dr. Harsha de Silva as the Chairman of the Public Finance Committee (COPF) is the third most trusted (43%) by Sri Lankans.

• A quarter of Sri Lankans (25%) place their trust in Prof. Ranjith Bandara, the Chairman of the Committee on Public Enterprises (COPE).

• Patali Champika Ranawaka as the Chairman of the National Council subcommittee on identifying short and medium-term programs related to economic stabilization is trusted by 23%.

International Assistance to the Economic Crisis

• Sri Lankans highly rank Asian countries when inquired into which country the public thinks would assist Sri Lanka to overcome the economic crisis.

• Less than 10% of Sri Lankans think either the USA or European countries would assist Sri Lanka to overcome the economic crisis. Economic Difficulties Experienced by Sri Lankans

• The survey findings reveal that the economic difficulties of the Sri Lankans continue. 82% indicate that their quality in consumption or purchase of food items have altered as a result of the economic crisis. Furthermore, 66% experience difficulties in affording medicine or medical treatments, 37% state that they have reduced their expenditure on their children’s education, one out of every three people (35%) claim that they have reduced the portion or size of their meals, or the number of meals consumed per day, and around 31% indicate that either they or someone in their families have lost employment.

• Close to 60% of Sri Lankans claim that they will consider migrating to another country if they were given an opportunity. From this, a majority are the youth. The survey also reveals that it is mostly the Sinhalese youth who show the highest level of interest in migrating if given an opportunity. When asked as to which countries they would prefer migrating to, a majority prefer East Asian countries, mainly Japan and South Korea. European countries are chosen as the second-highest preferred destination.

• People express mixed opinions on the question in relation to welfare policies. Although a majority support the reduction of government employees, people do expect the government to take responsibility to look after its people and spend on welfare programmes.

• The public expresses mixed opinions as to whether it is the government’s responsibility to ensure that every citizen has a job. Youth, as well as adults (above 30 years) share the same opinion with regard to the proposal of reducing government employees and the fact that the government should take the responsibility of providing welfare support to its citizens.

• Nonetheless, there is more support among the youth that it is the individual’s responsibility to find a job and not the government’s. Optimism and Pessimism about the Future Economic Condition