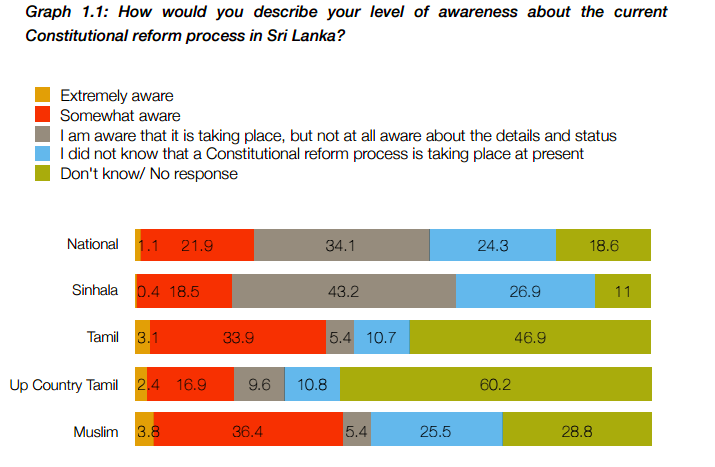 The report shows complete failure of the government creating public discussion and awareness on the constitutional reform process and this situation leave space for anti reform forces to manipulate peoples’ opinion, political analysts.

The CPA report is reproduced below:

At a Provincial level, Uva (83.6%) and North Western (76.8%) slowest the highest lack of awareness regarding the PRC. Almost 30% from the Western and Sabaragamuwa Provinces stated that they had heard of the PRC but were not aware of its activities. Awareness was highest in the Northern Province where 30% indicated their awareness of the PRC and its activities.

On the question of completely abolishing the Executive Presidential system, a key election promise of the yahapalanaya Government, Sri Lankans are once again divided with 35.7% supporting the complete abolition of the Executive Presidential system and 40.3% not supporting it. 24% said that they do not know whether they support it or not. Article 2 of our current Constitution states that ‘The Republic of Sri Lanka is a Unitary State’ and 63.6% of Sri Lankans believe that it is important to retain the phrase ‘unitary state’ in the new Constitution. This opinion is mainly held by the Sinhalese community (77.7%) while only 14.3% from the Tamil, 18.1% from the Up Country Tamil and 28.8% from the Muslim communities stated the same.