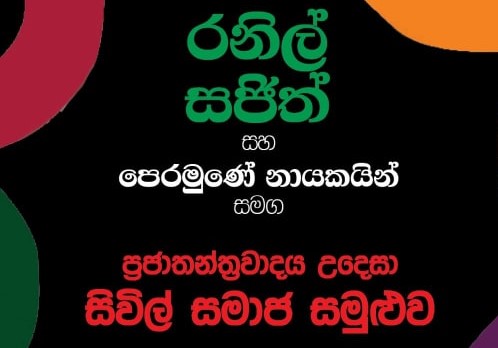 The National Movement for Social Justice and the Puravesi Balaya, the two best known pro-democracy social activist movements, announced to the news media yesterday that they wanted Premadasa to win the presidency and that Sri Lanka Podujana Peramuna (SLPP) presidential aspirant Gotabaya Rajapaksa was not suitable for governance and both civil organisations would work to defeat him.

The NMSJ was founded by the late Ven. Maduluwawe Sobhitha Thera, chief incumbent of the Kotte Naga Viharaya.

Meanwhile, the Civil Society and Trade Unions Collective that groups over fifty trade unions and civic action groups from across the country met in convention at the New Town Hall, Colombo, yesterday afternoon and pledged to support the presidential candidacy of Sajith Premadasa.

They presented to Candidate Sajith Premadasa their policy reform programme.

Candidate Sajith Premadasa, addressing the gathering at the New Town Hall said that the citizens of the country would have to decide on November 16th whether they wanted to consolidate and further build the freedoms and the democracy that was achieved by popular vote in January, 2015. The people will have to decide whether or not they want to bring back that dark previous political regime under which people were ruthlessly wiped out like swatting mosquitos, or they wished to retain the current era of friendship and happiness, Premadasa said. He reminded the gathering about the era of attacks on media professionals and TV studios and the abductions by white vans and disappearances of journalists.

Prime Minister Ranil Wickremesinghe told the gathering that the current government had maintained a regime of respect for the sanctity of life and this was the first victory of this government. In order to move beyond that first step, it was important to elect Sajith Premadasa as president.

At the news briefing in Rajagiriya, both NMSJ Convener Prof. Sarath Wijesooriya and Purawasi Balaya convener Gamini Viyangoda stated that the best option to defeat Gotabaya was the presidential hopeful of the New Democratic Front (DNF) Sajith Premadasa.

“Sajith Premadasa and his camp is the only hope for us to defeat Gotabaya Rajapaksa and Sajith is the best solution for the country,” Viyangoda said.

Viyangoda said that he and Prof. Chandraguptha Thenuwara had lodged a complaint with the Criminal Investigations Department (CID) regarding death threats they had to face after filing a petition in the Court of Appeal challenging the Citizenship of Gotabaya Rajapaksa.

“Death threats are being carried on social media platforms. I noticed Madhumadawa Aravinda has mentioned in his Facebook account that Gamini Viyangoda will have to travel on the same path Prageeth Eknaligoda travelled. There are many threats carried in different forms. The CID will continue further investigations,” Viyangoda said.

When questioned by a journalist regarding further action on the citizenship issue, Viyangoda said they have not received the submission reports of the petition and as soon as that is available they will decide whether to petition the Supreme Court.

“Gotabaya Rajapaksa should be grateful to the law and order established by the Good Governance Government. Before 2015, anybody who went against the Government only saw heckles and harassment.The best example is Dr. Shirani Bandaranayake. She was dragged into a miserable state with an impeachment as she was impartial in her judgements. Due to changes that occurred in 2015, we are experiencing democracy,” he said.

Prof. Sarath Wijesooriya explaining why Gotabaya Rajapaksa should be defeated said his record as the Defence Secretary clearly manifests the theatrics that will be carried out if he becomes President. “We agree that the common candidate was unable to achieve all promises.Yet the journey we started on 2015 cannot be easily given up. It should be further followed up; the freedom we earned should be secured. Journalists as well as all the other citizens have the right to experience freedom. If Gotabaya Rajapaksa comes to power he will run a military rule. After all, military rule suggests the mentality of destroying your opponent. As civilians we expect a country with a high degree of democracy,” he added.

Gamini Viyangoda also said that civil society activists are not concerned about being labelled if that leads to a better country. “We are civil society organisations, we do not posses any connection with the UNP – yet we find freedom through the UNP camp,” he added.

Purawasi Balaya Co-convener K.W.Janaranjana said that due to the immoral acts carried out by Gotabaya Rajapaksa, Opposition Leader Mahinda Rajapaksa faced defeat in 2015.

“The white van culture spread like a disease within society.Intelligence operatives had a hand in Prageeth Ekneligoda, Lasantha Wickremathunge and Upali Thennakoon incidents.Those Army officers did not have any personal grudges against them. If Speaker Karu Jaysuriya did not intervene in the case of Keith Noyahr, he too would have faced the same plight. We are sure even Mahinda Rajapaksa would not be able to control if Gotabaya takes over,” he said.