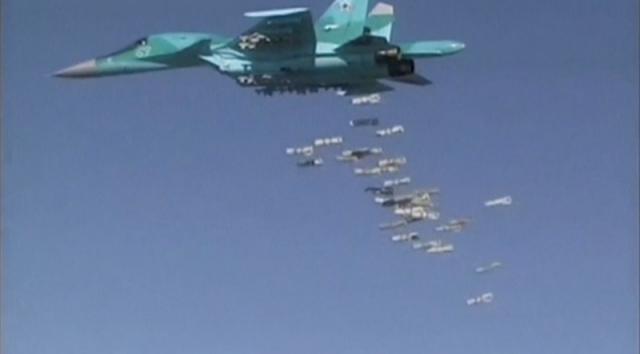 Image: A still image, taken from video footage and released by Russia’s Defence Ministry on August 18, 2016, shows a Russian Sukhoi Su-34 fighter-bomber based at Iran’s Hamadan air base dropping off bombs in the Syrian province of Deir ez-Zor. Ministry of Defence of the Russian Federation/Handout via Reuters.

Russia failed to win re-election to the United Nations Human Rights Council on Friday, beaten out by Hungary and Croatia, following lobbying by rights groups against Moscow’s candidacy because of its military support for the Syrian government.

“It was a very close vote,” Churkin told reporters. “Croatia, Hungary – they are fortunate because of their size they are not as exposed to the winds of international diplomacy; Russia is quite exposed.”

“We have been there a number of years, I’m sure next time we’re going to get in,” he said.

Russia’s three-year term on the 47-member Geneva-based Human Rights Council will finish on Dec. 31. It had been competing for a second three-year term. Council members cannot serve more than two consecutive terms.

“U.N. member states have sent a strong message to the Kremlin about its support for a regime that has perpetrated so much atrocity in Syria,” said Louis Charbonneau, U.N. director at Human Rights Watch.

The United States, Egypt, Rwanda, Tunisia, Iraq and Japan were elected to the body, while Saudi Arabia, China, South Africa and Britain won a second terms. Their candidacies were uncontested but needed to win a majority vote. In the other competitive slate, Cuba and Brazil beat out Guatemala.

“The re-election of China, Cuba and Saudi Arabia – regimes which systematically violate the human rights of their citizens – casts a shadow upon the reputation of the United Nations,” said U.N. Watch Executive Director Hillel Neuer.”