Years after war, trials of resettlement in Sri Lanka 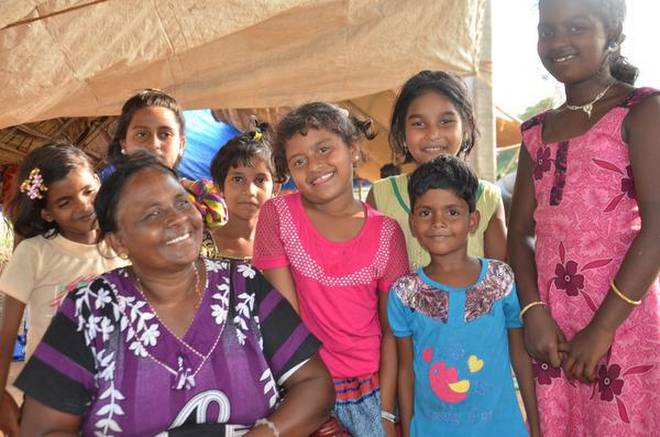 Image: ”Edward Selyn was displaced in 1996 with her family. Eight years after the war ended and months after her return, she still feels displaced.” Ms. Selyn with her grandchildren at the protest site. | Photo Credit: Meera Srinivasan

After 20 years in India, wearing a “refugee” tag that led her from one camp to another, it was only in December 2016 that Edward Selyn, 55, returned home. Until a few days ago, she was among a group of people seated under a tent in Mullikulam village in Mannar, in Sri Lanka’s Northern Province, protesting in the scorching heat for a month, demanding that the Sri Lankan Navy release her land.

She was displaced in 1996 with her entire family, after the civil war broke out. Now, eight years after the war ended and months after her return, Ms. Selyn has not stopped feeling displaced. “I had all my documents and deeds, but still could not get back to the land where my home was. I did not think we would come back to such a situation,” she says.

Several thousand acres of formerly civilian-owned or occupied land across the conflict-affected Northern and Eastern Provinces remained with the Sri Lankan armed forces after the war ended in 2009, severely hampering post-war resettlement in Sri Lanka.

Right to return
After waiting for decades, frustrated northern Tamils and Muslims organised a wave of protests in the past few months, asking for their lands. Pressured by their relentless agitations, the military began returning land in different areas, and on Saturday (April 29) released Ms. Selyn’s land. The Resettlement Ministry claims that the armed forces have so far released 70,000 acres of land they held, but no one knows exactly how much yet remains under their control, or when exactly those lands might be released. Neither the national unity government nor the Ministry was proactive in communicating with the affected people, leaving them in the dark about their future.

A couple of hundred metres away from Ms. Selyn’s protest were nearly 100 Muslim men seated in a large semicircle, outside a pale green mosque in Marichchukaddi village of Musali. Their protest, too, is about the right to return. After the Liberation Tigers of Tamil Eelam expelled them from the north in the early 1990s, thousands of Tamil-speaking Muslim families were displaced to other parts of the island for nearly three decades. And just as some of them had begun resettling in their areas of origin, amid the hazy optimism after some land was released, a heavy blow struck them by way of a recent gazette notification. The hastily drafted notification suddenly expanded the limits of the Wilpattu National Park, in Sri Lanka’s North Western and North Central Provinces, declaring their adjoining villages “forest reserve”, out of bounds to them.

“The linking of the wildlife forest and our former homes is new and very unfair,” Ali Khan, one of the protesters, complains. “We lived in those villages for generations, no one encroached on the forest area.”

The situation Ms. Selyn faced or Mr. Khan is in is symptomatic of the grossly woeful resettlement project that the Mahinda Rajapaksa administration, formerly in power, flagged off. A militarised state apparatus hung over on its war “victory”, attempts by the state to settle Sinhala villagers in the North and East, and recurring bureaucratic lethargy have effectively stalled resettlement for scores of families.

Almost everywhere across the Northern Province, protesters are quick to credit President Maithripala Sirisena, who they helped come to power in 2015, for enabling a democratic environment in which they can protest without fear. All the same, they are now disillusioned with his government’s piecemeal approach to resettlement, at best ad hoc and half-hearted and at worst blatantly insensitive. It has failed to factor in the varied needs of communities trying to restart their lives after years of strife. The rare hope that people felt initially is vanishing, making way for familiar disappointment.

Recent instances of the military returning some of the occupied land brings much-needed relief to communities, but getting back to their land only means facing new challenges. G. Jayalakshmi is among the few to have recovered her land in Pilakkudiyiruppu village in Mullaitivu. While the return itself came after a month-long protest by residents, what followed was a classic case of thoughtlessness and neglect on the part of the state. Under a makeshift tent on barren land, families like hers live without drinking water, sanitation or electricity. “We have to go a little far there for our needs,” she says, pointing at the silhouettes of a few surviving trees a few yards away, in the dim light of hurricane lamps hanging from their branches. “What else can we do?” she asks, raising her voice over the shrill bark of a lone dog.

Meanwhile, local government officials are asking them to give up the house they lived in — that displaced families got some years ago — in return for new homes here. “There is nothing on this land, our [old] homes were fully razed down. How can we give up our homes elsewhere already? What if nothing comes up here?” Ms. Jayalakshmi asks.

For those who kept asking when they might get back to their land, the prospect also brings with it the promise of a livelihood. Speaking of their land, the protesters foreground concerns over livelihood in the same breath. For hundreds of years before the war, the people of the north were predominantly farmers or fisherfolk. Whether cultivation for trade or subsistence, it was their land and waters that gave them a sense of place and importantly, economic security. The civil war and the multiple displacements it caused denied them access to both.

Recalling a time when Tamils and Muslims of Mannar owned neighbouring plots of land and had more cordial relations, Mr. Khan says the communities cultivated land or collected honey for a living. “There were fertile plots and ponds in our village. While many of us struggle without jobs now, we can’t use any of that. They say it is conservation.”

Mr. Khan also points to outdated numbers in government records that don’t account for successive generations. “Our village limits should be redrawn keeping in mind the increase in population,” he says, highlighting the plight of the landless.

Lives, lands and livelihoods
Resettlement was never going to be easy and the government knows that. Headline housing schemes and vocational training centres alone cannot provide solutions to people who have been subjected to brutal violence and displacement. It takes a far more comprehensive approach and a thoughtful strategy to rebuild a war-battered community. It must be one that appreciates the intimate link between the lives of a people to their land and livelihoods, and in keeping with their current realities. For eight years, the northern people have put up with a rather messy resettlement process, counting only on their resilience. Their protests are nothing but a reflection of their waning patience.

After much grandstanding at the UN Human Rights Council and international forums about its commitment to reconciliation, it is time for the Sri Lankan government to get its act together on the ground. Communities cannot reconcile as long as some citizens do not feel secure. It is not the state’s benevolence or patronage that the people want. As citizens, they simply want the state to do its duty. And that is to make everyone on this island feel at home.
The Hindu