Writ application filed by parents: Karanangoda willfully refrained from taking actions against the abduction of our sons (Full text) 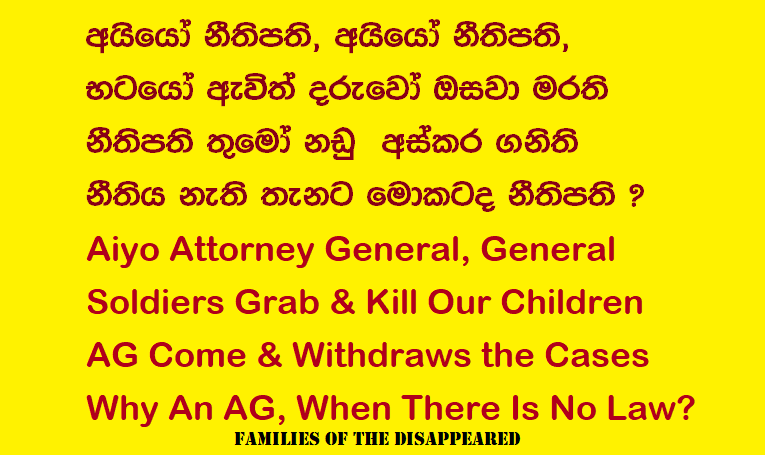 Families of the Disappeared (FoD) have organised a silent protest at 0900 – 1130 am
in front of the Court of Appeal near the Supreme Court in Colombo.

The Petitioners above named appearing through Ms. Achala Senevirathna Attorney-at-Law by his petition states as follows;

The 2nd Respondent, Wasantha Kumara Jayadewa Karannagoda, willfully refrained from taking actions against the group which involved in the abduction;

The such illegal activities were carrying out with the blessings of the 2nd Respondent, Wasantha Kumara Jayadewa Karannagoda;

The 2nd Respondent, Wasantha Kumara Jayadewa Karannagoda,  has been informed by D.K.P Dasanayake and Guruge about the abduction of the victims during the security meeting held in the following day of the abduction.

And they further state among other tings that:

The Petitioners state that in the circumstances the decision to withdraw the indictments and/or charges leveled against the 2nd Respondent [ by the 1st Respondent Hon. Attorney General] is unreasonable, bias, illegal, unlawful and politically motivated with intention to gain undue advantage and against the rules of natural justice hence liable to be quashed by a writ of certiorari of Your Lordships’ Court.

The Petitioners state that decision of 1st Respondent, the Hon. Attorney General to withdraw the indictment served on the 2nd Respondent is clear abuse of discretionary powers granted by law and liable to be rectified by orders of Your Lordships’ Court for the
purpose of Administration of Justice.

The Petitioners inter alia seek following orders in the nature of writ from Your Lordships’ Court
i. A writ of Certiorari quashing the decision of the 1st Respondent to withdraw the indictment and/or the charges levelled against the 2nd Respondent in the High Court Case bearing No. HC (TAB) 1448/2020.

ii. A writ of Mandamus directing the 1st Respondent to proceed against the 2nd Respondent in the High Court Case bearing No. HC (TAB) 1448/2020 based on the indictment already served on him.

iii. A writ of Prohibition, prohibiting the 1st Respondent from withdrawing the indictment and/or the charges levelled against the 2nd Respondent in the High Court Case bearing No. HC (TAB) 1448/2020.

Read the full text of the writ application as a PDF: Karannagoda certiorari final