New President Ranil Wickremesinghe-administration  came under a  barrage of vehement condemnation locally and globally for unleashing a brutal attack on peaceful anti-Government protestors near the Presidential Secretariat in Fort.

The incident took place in the early hours of Friday and less than 24 hours since Wickremesinghe was sworn in as the interim President.

Army soldiers and Police Special Task Force personnel used excessive force which many termed as “uncalled for” to evict protesters occupying the Presidential Secretariat. The move was despite protesters agreeing to evacuate by 2.00 p.m. Friday. Several citizens including journalists were injured whilst scores were arrested soon after.

According to the BBC, its video journalist was beaten by the Army and one soldier snatched his phone and deleted videos. BBC News journalist Anbarasan Ethirajan said: “When activists raised objections to their presence, the security personnel marched on and became aggressive. The protesters were pushed back. Within seconds, we saw soldiers shouting, dismantling and destroying makeshift tents and other items on the pavement.”

“Army informed protestors not to create a fight but cooperate but the protestors were swearing and provoking them after which the clash erupted,” a Police source said.

Last evening, Attorney-at-Law Nuwan Bopage and eight others who were arrested at the Galle Face protest site were granted bail by the Colombo Fort Magistrate’s Court.

The Presidential Secretariat until yesterday remained the final place of occupation by anti-Government protesters out of the three State properties since the 9 July people’s revolution to oust the then President Gotabaya Rajapaksa. Protesters recently evacuated from the other two – the President’s House and Temple Trees.

Officials said Wickremesinghe was keen to re-take the Presidential Secretariat so as to swear in the new interim Prime Minister Dinesh Gunawardena and 18 Cabinet Ministers at the venue. However, the ceremony took place later on at the Prime Minister’s Office at Flower Road, Colombo 7.

On Wednesday, Wickremesinghe vowed to take a tough line against those trying to disrupt his Government. He made a distinction between peaceful protesters and “troublemakers” engaging in illegal behaviour. “If you try to topple the Government, occupy the President’s Office and the Prime Minister’s office, that is not democracy, it is against the law,” Wickremesinghe said.

“We will deal with them firmly according to the law. We will not allow a minority of protesters to suppress the aspirations of the silent majority. ‘I am a friend of the people’,” Wickremesinghe added. He also indicated that anti-Government protesters can use the Vihara Maha Devi Park as an alternative venue for their activism.

Officials maintained that the protest site has been an eyesore for over 100 days for international leisure and business visitors.

The country has been in a state of emergency since Monday but the pre-dawn quelling of protesters by excessive force prompted widespread condemnation from human rights groups, diplomats, clergy, Opposition politicians and lawyers.

UN Human Rights Commission said: “We are alarmed by the unnecessary use of force by security forces to break up a protest camp near presidential offices in Colombo. We condemn reports of beatings of protesters, journalists and lawyers and urge authorities to halt the use of force.”

The UNHRC Sri Lanka Core Group (comprising Canada, Germany, Malawi, Montenegro, North Macedonia, the USA and UK) in a joint statement said peaceful protest is fundamental to any democracy and dismayed at the violence which took place at Galle Face on Friday. It called for full respect for human rights and the rule of law. 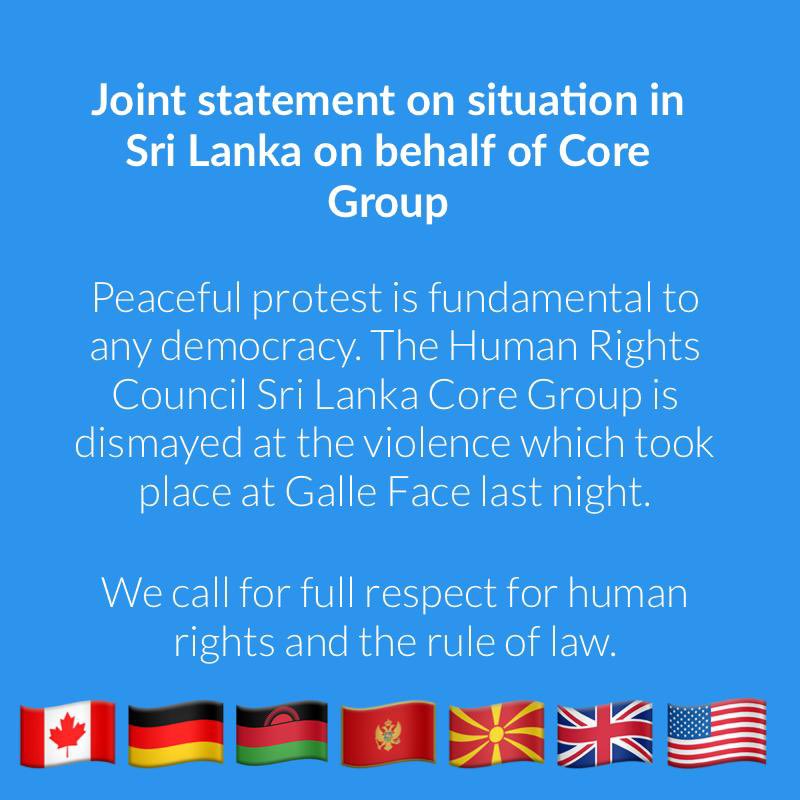 Amnesty International South Asia said the attack on ‘GotaGoGama,’ the peaceful protest site in Colombo by the Police and the military is unacceptable and authorities must stand down immediately.

Human Rights Watch South Asia Director Meenakshi Ganguly said: “President Ranil Wickremesinghe has been telling donors and friends that he is committed to resolving the economic crisis, and yet among his first acts was to deploy a midnight security forces raid to disperse the peaceful protesters.”

“The international community needs to act now, send a strong message that the global efforts are directed to support the people of Sri Lanka, and not to prop up abusive political leaders who undermine fundamental freedoms,” she added.

UN Resident Coordinator Hanaa Singer-Hamdy said she was gravely concerned by the use of force to disperse protesters. “Journalists and human rights defenders have a right to monitor demonstrations and their functions should not be impeded.

“Actions that stifle protests and right to peaceful assembly can worsen economic and political stability in Sri Lanka. Peaceful solutions in accordance with broad public consultations is the only way forward,” she added.

The European Union said: “Freedom of expression proved essential to Sri Lanka’s current transition. Hard to see how restricting it severely can help in finding solutions to the current political and economic crises.”

UK High Commissioner Sarah Hulton expressed concern over the attack and said: “We have made clear the importance of the right to peaceful protest.”

US Ambassador Julie Chung said: “Deeply concerned about actions taken against protestors at Galle Face in the middle of the night. We urge restraint by authorities and immediate access to medical attention for those injured.” Canadian High Commissioner David McKinnon added: “It is crucial the authorities act with restraint and avoid violence.”