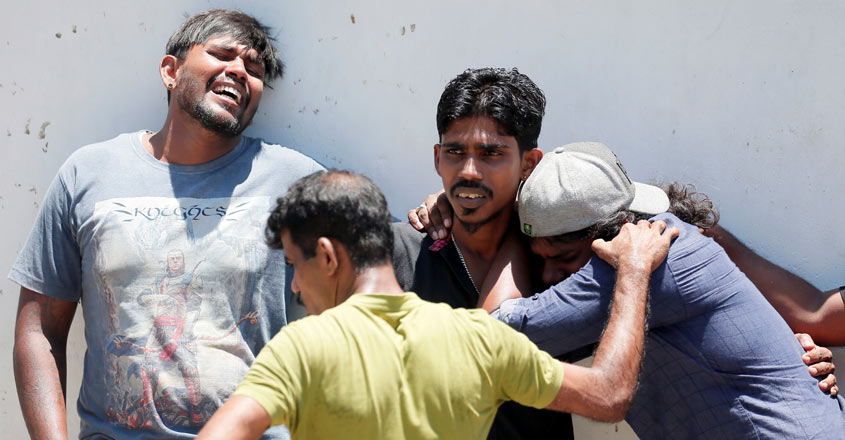 Image: After the church bombing in Negambo (c) Dinuka Liyanawatte.

The Women’s Action Network (WAN*) strongly condemns the wave of bombings of churches and hotels in Colombo, Negombo, and Batticaloa. Children and families celebrating a joyous Easter Sunday now lie among the 310 killed and hundreds wounded. Bodies transported in bags; funerals planned for children, parents and tourists. It is impossible to bear, impossible to find the words. Our hearts, thoughts, and prayers are with the families and loved ones of the many victims of this despicable attack and with the Catholic and Christian communities.

Every community in Sri Lanka feels the trauma. Catholics and Christians targeted on their holiest day question whether the State will protect religious minorities from terror. Suicide bombings evoke memories of war and feelings of insecurity for all communities – Sinhalese, Tamils, Muslims; women, men, and children. Muslims, recently the victims of ethnically targeted violence, fear retaliation will ensue from hate mongering and incitement. They long for all to see that the bombings do not represent Islam and run counter to the traditional non-violence of Sri Lanka’s Muslim community. Trauma and fear have also been triggered among Tamils, who fear this attack will be used to deny the promises of transitional justice, including longstanding calls to dismantle discriminatory security laws and structures. Outsiders again associate our beautiful island with bloodshed, discrimination and fear.

We condemn in strongest terms the despicable act of the perpetrators. Such reckless killing of civilians, that too in places of worship, goes against our shared humanity and cannot be justified by anyone under any circumstance. All perpetrators of this heinous crime should be arrested and prosecuted within the law. Non-recurrence is predicated on accountability for the crimes committed and for the State’s lapses in allowing them to occur.

It is deeply disturbing that State intelligence agencies possessed information of possible attacks but did not act upon it and kept citizens in the dark. We believe this negligence is equally responsible for the large-scale casualties and damages. Lessons must be learnt on how to handle and disseminate credible security threats to safeguard the lives of ordinary people rather than cloister such information within an elite circle of government.

As we struggle to make sense of how this happened and where to go from here, we must above all find strength through unity. History teaches us that division and hatred sow only violence and loss. We call on the State to investigate and prosecute the perpetrators, protect religious minorities from further attacks, prevent retaliation, and vigorously champion communal harmony. Efforts to bridge communal divides should be inclusive, with women participating at all levels. We fully support the calls to “avoid propagating unverified reports” and to remain “united and strong.” The State must continue to protect all its citizens from malicious rumours and hate speech on social media. Measures and messaging aimed to protect innocent civilians from further attacks and retaliation must be put in place. Curfews and military presence on the streets will not alone suffice.

We call on Sri Lankans of all communities to join in this effort and reach out to fellow citizens. This is not a matter of politics, even in this election year, but of our collective healing and survival, building the united, just and peaceful future we deserve. These events compel all of us including in civil society to rethink how we move forward collectively and build trust among and between communities.