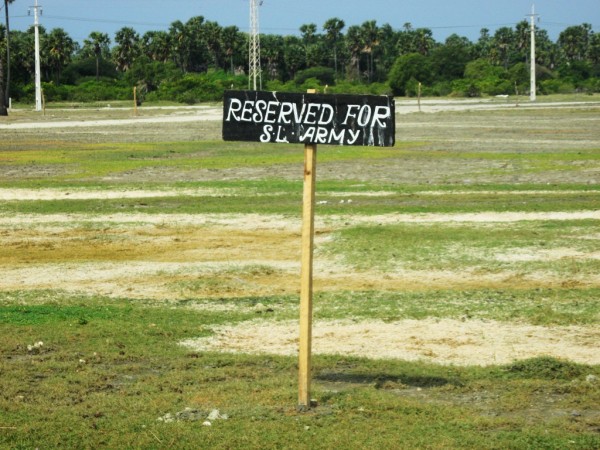 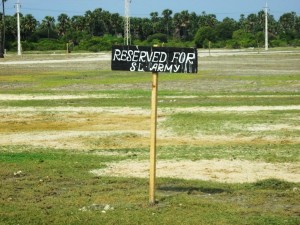 D.B.S. Jeyaraj
Women from nine villages and housing schemes in Mannar are perturbed over plans to set up a new Army camp in Tharavankottai.  Representatives of Women’s rural development societies from the nine concerned villages met recently and drafted a petition in Tamil protesting the allocation of land along Tharavanlottai road for the purpose of constructiong a new Army camp.

It is learnt that the Mannar District secretary allocated the land on a specific directive issued by Northern Province Governor Gen. Chandrasiri.

The land allocated for setting up an army camp is adjacent to a canal and lake constructed by the United Nations Development Program(UNDP) to satisfy the “water” needs of people in the vicinity.

The UNDP constructed lake collects rain water flowing through a canal.The water collected is used by the people from nine villages and housing schemes for washing,bathing and also for drinking water.

The women in their petition have appealed to authorities concerned that work in progress should be suspended immediately and that land be allocated elsewhere for the setting up of a new Army camp.

The women in their petition have expressed concern and anxiety about potential problems if the army camp is constructed as intended .They have pointed out the following facts in their apppeal

Most families in these villages are war – affected and living below the poverty line. In many instances the bread winners of the family are women.There exist many problems regarding living conditions for them.

When an acute shortage of land for building dwellings is prevalent in the area the decision by the Northern Governor to allocate lands for an army camp is unjust and unfair. Priority should be given to landless people in allocating land.

The people fear that the UNDP constructed lake may be utilized by the soldiers from the army camp thus depriving families from their primary repository of water.

Most of these villages experience heavy floods during rainy season. The flood waters of three villages recede slowly by flowing down to this lake mainly through the lands allocated for construction of the army camp

The construction of the army camp and consequent elevation of low –lying lands for this purpose will obstruct this waterflow resulting in villahes like Tharavankottai,Jumbrown nagar and Jeevapuram being waterlogged indefinitely.

The women in their petition have also raised concerns about possible inconveniences as a result of the army camp to women. There is a lack of toilets and many utilize the shrub jungle nearby. Much of the bathing is done at the lake.

Many of the dwellings are flimsy and quite open. The women feel their privacy will be intruded upon through movement by soldiers in the area.

Women and girls will feel insecure due to proximity of army camp. Past experience in other areas demonstrate that women will be unable to move about after nightfall. Likewise schoolgirls going for tuition before dawn will also find it cumbersome.

The use of heavy vehicles by the army in the area could pose a hazard to little children.

The Mannar women both Tamil and Muslim have appealed that construction of the army camp should be done elsewhere and not in the area as being planned now.

The petition has been sent to all authorities concerned including high govt officials, the Northern Governor and Members of Parliament
TC