Will the Sri Lanka Left rise up to the occasion or will it too get wiped out before public anger? – Jayatilleke de Silva 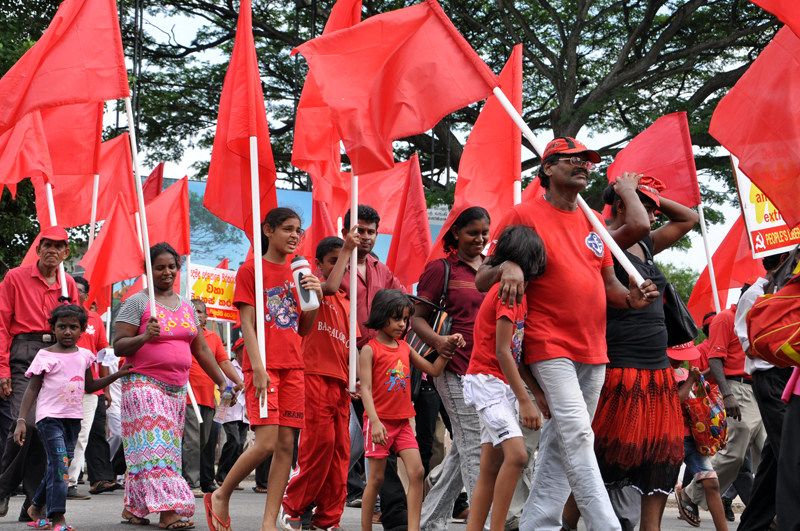 Since independence, our country has been ruled by Right and Center-Right parties. The latter was, however, mistaken as Center – Left on account of its association with some Left parties. In all such instances the major partner in the alliance used the Left to strengthen their power, at the expense of the Left. Their easy subordination and willingness to refrain from asserting independence led even the conservative Right to use the Left to strengthen their power.

Though it never held real political power as such, the Left has made a signal contribution to social development. Its contribution to the independence struggle is acknowledged even by its enemies. So is its contribution to the development of the nascent trade union movement into a militant and formidable force in the first half of the last century. Many welfare legislations such as the 8-hour working day, workmen’s compensation, ceiling on housing ownership, the Paddy Lands Act etc. were due to their agitation. Some such legislation was later revised negatively by subsequent governments. However, it is a different matter.

The Achilles heel of the Left has been, and still is, its disunity. The first split occurred on account of external factors. The LSSP, the first socialist party in Sri Lanka was split over the attitude to the Soviet Union during the Second World War. Thus, divided into two camps, the Left movement lost some of its vitality. Even then it performed fairly well at the 1947 general elections and could have formed a Government had it got united.

Objective and subjective factors, including doctrinaire differences on local issues, especially on the evaluation of the role of national bourgeoisie, and the theory and practice of united fronts, were responsible for subsequent splits and disintegration of the Left. This gave rise to the birth of the New Left, which now is already over 40 years.

Preference to the parliamentary struggle over the mass struggle, and the subjugation of the latter to the former, gave way to the contamination of the Left with communalism. In their haste, some in the New Left also embraced communal policies and fostered the division of progressive forces. The scourge of communalism finally completed the rout.

The Left has been weakened by its own illusions. For example, sections of the traditional Left parties and a far greater percentage of their sympathizers, believe that the SLFP or for that matter its duplicate and successor – the SLPP, are Left parties. It is a misnomer and an illusion. The credo of both of them is neo-liberalism, whatever rhetoric they use to deceive the masses. Their anti-imperialism is a mask and a camouflage as experience should convince the unbiased.

Some in the Left still brandish slogans which are out of date though they may have been positive in their own time. Such is the slogan of anti-UNP unity. How could the Left unite with bourgeois or petty bourgeois parties that have the same economic policies as the UNP, to fight it? The ease with which parliamentarians cross-over between them is a clear example of their similarity.

At this juncture, when established bourgeois parties have dismally failed to find solutions to the problems facing the country, and are only interested in retaining and regaining political power for self-aggrandizement and robbing the State, the Left if united would have been a potent alternative that people could trust.

However, old socialists consider such a known self-aggrandizing leader a Messiah, who has a magic power to solve all problems. Like their bourgeois counterparts they interpret the present political developments with an eye to getting a foothold on a coalition that is likely to achieve victory at the next elections.

Most political parties and groups including those on the Left have made some mistakes in the seven-decade post – independence history. Some have self-critically acknowledged their mistakes and rectified them. Some have shown no inclination to repeat them, though they seem to distance themselves from such mistakes. Whatever it is, it is tragic that the Left cannot get together on a practical agenda to ameliorate the worsening plight of the people, especially the poor, leaving the settlement of longstanding and theoretical disagreements to the future. The resolution of such disagreements is a process that could take years.

One could discuss whether Stalin or Trotsky was right, whether Communism is a dictatorship or democracy, whether Gorbachev was a liberator or a traitor till cows come home. But the urgent problem is to agree on a joint struggle to safeguard the rights and needs of the masses.

Will the Left rise up to the occasion or will it too get wiped out before public anger?