Wijeweera and Prabhakaran: Two sides of the same coin 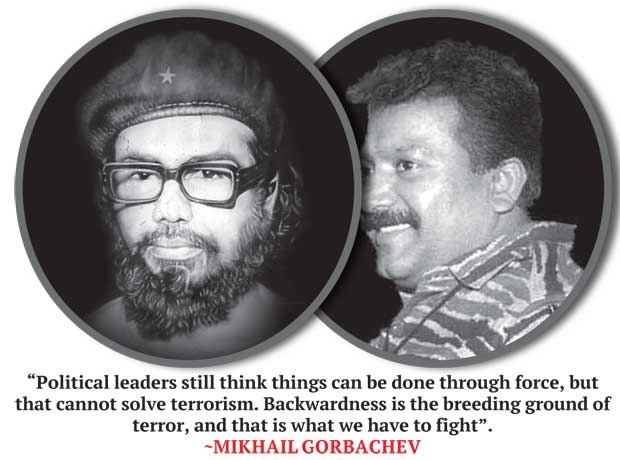 Rohana Wijeweera was a remarkable man. At the height of the cold war in the international arena, when the United States of America (USA) was in constant confrontation with the then Soviet Union (USSR) in every possible global forum, Wijeweera played his logical role as the leader of the first revolutionary political party in post-Independence Sri Lanka.

The Janatha Vimukthi Peramuna (JVP), which Wijeweera started as a cellish-organisation driven by indoctrination-oriented transformation of the minds and political thinking of the rural youth in Sri Lanka within a very short time of three years (1968-71), managed and succeeded in transforming the prevalent political landscape; it inspired a sizeable segment of our youth population, both educated and semi-educated, to such an extent, Wijeweera at the beginning, just on the eve of the 1971 insurrection, was a real hero among these indoctrinated youth.

As a mob-orator, Wijeweera had no match. Former President Ranasinghe Premadasa was a close second, but lacked the flow and stamina of Wijeweera.

According to some close comrades-in-arms of Wijeweera, his dedication to the cause and the spirit of untiring commitment he displayed at the formative stage of the ‘movement’, alone was responsible for the graduation of the movement from a cellish organism to a well-funded, structured political entity in the late 1980s. Yet, what began as a political think-organisation in the late 1960s turned out to be a well-oiled killing machine in the late 1980s.

The planned and plotted executions of leading political figures; mostly of the kind that had either associations or direct connections to the United National Party (UNP), except perhaps the killing of Vijaya Kumaratunga, assumed a macabre style with gruesome consequences to the victims. In 2017, after two score and six years, another April 5th dawned and paled gently into the night.

Its present leader Anura Kumara Dissanayake is undoubtedly the best orator in Sinhala among a very lacklustre set of Parliamentarians. The other two JVP members, Handunhetti and Wijitha Herath, too are outstanding speakers and this JVP trio dominates the local political platform shoving other Parliamentarians into insignificance and men of no consequence. Speechifying in the local vernacular seems to be the monopoly of the JVP.

Yet, Wijeweera founded a political organisation whose philosophy bordered on the murderous path, which was taken by Pol Pot in Cambodia. Whilst Pol Pot resorted to the massacres of his opponents more so after assuming power, Wijeweera resorted to it as his raison d’être.

The romanticist aura that the ’71 insurrection radiated died with the crushing blow it received at the hands of the State security forces. Leaders of the then SLFP-led Government were Sirimavo and Felix Dias Bandaranaike.

“The coin will appear again, one would say. And whichever side the coin is turned, it is either Wijeweera or Prabhakaran, an undesirable choice for the turner! But nobody can question the sincerity to the cause both these terrorist leaders exhibited. ”

The Victor Ivans, Lionel Bopages, Kelly Senanayakes, Sunanda Deshapriyas, heroes of the ’71 insurrection, and the lot that was attached to the JVP philosophy of governance and economic principles are gone from the JVP.

Their departure from the epic vision of communist takeover of government machinery and implementing people-friendly policies is all history.

Rohana Wijeweera, although immediately in the wake of the ’71 insurrection, was portrayed as a dedicated revolutionary in the calibre of Ho Chi Min and Che Guevara, with the 1982 Presidential Election, his stature sank to an unrecoverable low in that his posture of a revolutionary driven by idealism and ideology was shattered; his prowess to represent the downtrodden masses diminished and his appeal to the English-speaking elite as a romantic radical began waning by the day.

But his appeal to the rural educated and semi-educated youth remained intact.

Saman Piyasiri Fernando alias Keerthi Vijayabahu, who was primarily responsible for the establishment of Raathri Aanduwa (Government at night time) gained momentum when Wijeweera launched his so-called Second Revolution in the wake of the assassination of Daya Pathirana, leader of Independent Student’s Union, University of Colombo.

Despite attracting a lot of unwanted rivalry and peer-revenge, Wijeweera managed to lead a clandestine movement, whose rank and file consisted of disillusioned youth bent on extracting their pound of flesh from whoever was in power.

A social imbalance that had been caused by failure on the part of successive Governments since Independence was waiting to be tilted in favour of anarchy and disorder.

At the same time Wijeweera’s cunning and political strategising embraced the most fundamentally flawed but dangerous base instincts of the masses.

With the arrival of the Indian Peace Keeping Force (IPKF) and the pervasive nationalist sentiments of large sections of the Sinhala people, the JVP began to terrorise the country to an unprecedented level, consequently the entire nation became hostage to Wijeweera’s mad and perilously perverted thinking.

In other words, Wijeweera, while enjoying the luxuries of a planter’s laid-back life on an estate in Ulapane, put into motion a killing machinery that killed many and terrorised hundreds of thousands of innocent Sri Lankans.
While Wijeweera was in full swing in the South, another killer whose idea of a Tamil homeland spread from Puttalam to Yala East via Jaffna peninsula along the coastline of the country systematically eliminated his rival leaders of like-mended terror organisations and reigned supreme with a well-equipped army.

His name was Veluppillai Prabhakaran and his organisation was Liberation Tigers of Tamil Eelam (LTTE). Two ruthless leaders sat on top of two ruthless movements. Like all ruthless leaders, like all dictatorial megalomaniacs – which both Wijeweera and Prabhakaran were – the duo was uncomfortable with any rising stars within their own movements.

Prabhakaran’s closest confidants in the LTTE were Karuna in the East, while Mahattaya in the Jaffna peninsula. Karuna and Mahattaya were gaining prominence and popularity among the rank and file of the LTTE in the peninsula.
Prabhakaran could not tolerate this. Nor could he allow any of these leaders to overcome his own exalted status of being the undisputed leader of the coming Eelam.

Prabhakaran’s calculated extermination of his rival groups and their leaders, not sparing even A. Amirthalingam, Yogeswaran and other leaders of the civil political leadership of the Tamils in the North, assured him of the status of unrivalled ‘Prince of North’.

In self-assuredness, Prabhakaran was not second to Wijeweera. Both these ‘revolutionaries’ did not tolerate internal dissent.

He conducted the Eelam war from the comforts of a super bunker located in the Vanni district, close to Mullaithivu; a bunker descending four stories underground. The camouflaged bunker was found by troops in a coconut grove in 2009. They said at the time that it served both as the main rebel hideout and a major residential site for Prabhakaran.

Rohana Wijeweera too led a very comfortable life in the cool climates in upcountry, on a tea estate in Ulapane, to be specific.

“A social ailment not attended to by successive Sinhalese-led governments, the JVP and LTTE created havoc in the Sri Lankan polity in no unambiguous fashion”

“Now suppose there is a desperate bandit lurking in the fields and one thousand men set out in pursuit of him. The reason all look for him as they would a wolf is that each one fears that he will arise and harm him… This is the reason one man willing to throw away his life is enough to terrorise a thousand.” (Source: United Defence Manufacturing Corporation).

Prabhakaran and Wijeweera shared one other common social cord- caste. While Wijeweera hailed from the Karawa (Fisherman) caste, Prabhakaran too was from its equivalent caste in Jaffna. The JVP in the early 70s and even later attracted their major recruits from the so-called oppressed castes. However, there is no solid evidence as to which caste groups made up the majority of fighters in the LTTE.

A social ailment not attended to by successive Sinhalese-led governments, the JVP and LTTE created havoc in the Sri Lankan polity in no unambiguous fashion. The two movements made their mark in our recent history and whether they would rise again in the future is very much dependent upon how fast and with what sincerity the present and future Governments are willing to resolve an unresolvable issue.
The coin will appear again, one would say. And whichever side the coin is turned, it is either Wijeweera or Prabhakaran, an undesirable choice for the turner!

But nobody can question the sincerity to the cause both these terrorist leaders exhibited.