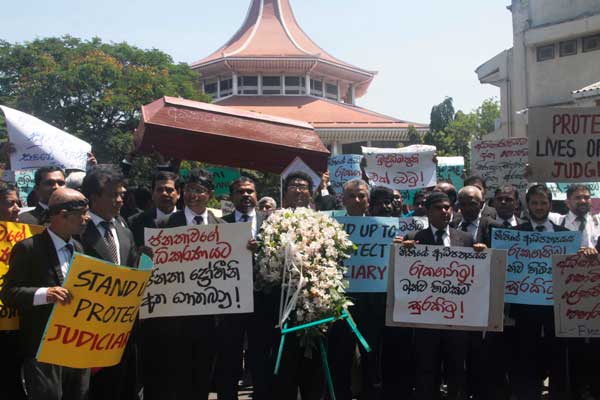 The work on High Court, District Courts and the Magistrate Courts throughout the island came to a standstill yesterday due to the protest carried out by the judges against the assault carried out on Judicial Service Commission Secretary Manjula Tilakaratn by unidentified persons at Mount Lavinia on Sunday.
Lawyers throughout the country kept away from courts and took to the streets against the assault on Judicial Service Commission Secretary Manjula Tilakaratne. They burnt a coffin signifying the death of the independent Judiciary in the country. They contended that the Judiciary in the country had died a natural death with increased interference by the Executive.

Lawyers carried a coffin around the court complex at Hulftsdorp sat on the middle of the road chanting gathas which are usually chanted in funerals and finally set fire to the coffin. They signed an awareness petition which was to be sent to the international community.
Senior Counsel J.C. Weliamuna addressing the gathering said that the assault conduct on the Secretary of Judicial Service Commission Manjula Thilakaratna was not an isolated attack carried out on him or that took place in fits and starts.

He said for a prolonged period of time it had been noted that such assaults had been carried out on those who were having opposite ideas to the Government. He said this is another turn in that deed and it would not be final and the lawyers as well as civil organisations should join to voice against it.

He said the Government should be held responsible for the whole episode and insisted the Police should apprehend the real culprits who assaulted Tilakaratne instead of getting hold of innocent people and claiming that they are the ones who are behind it. “We don’t want the Police to produce drug addicts claiming that they are the culprits,” he said.

He said the attack on the independent Judiciary should be stopped. He urged that the Bar Association should be firm in reaching a decision over the issue. He said as lawyers they would never allow the setting fire to the independence of the Judiciary.

Counsel Chandrapala Kumarapeli speaking said the Government did not need an independent Judiciary. He said though the Government is attempting to wash its hands off the incident, it was clear who had planned the assault. He said it was the Government which needed to destroy the data that was on Manjula Thilakaratne’s telephone and thus stole it from him.

He said the public knew who broke into the Colombo Museum and robbed the artifacts but the Police, instead of producing the real culprits, had produced drug addicts before court. He underscored the fact that if the independence of the Judiciary was destroyed, Provincial Councillors and the Pradeshiya Sabha members would give judgments for cases over the phone according to their whims and fancies.

Former Army Commander Sarath Fonseka said that he had been made aware that a Government Minister who is involved in drug cases and his henchmen were behind the scene He said he would not allow the destroying of the independence of the judiciary.

Meanwhile the High Court Judges’ Association in a press release condemned the vicious attack on the Secretary and expressed grave concern over the cowardly act perpetrated against an official of an independent institution which posed a question on the sincerity and commitment of upholding the independence of the Judiciary and the rule of law.

They asserted that the senseless attack was an act of aggression against the entire Judiciary and called on the authorities to bring the perpetrators to book. The staff of all the Courts at Hulftsdorp took part in a separate protest at Hulftsdorp Street yesterday.