Why Sri Lanka President Rajapaksa is tweaking the Muslim community 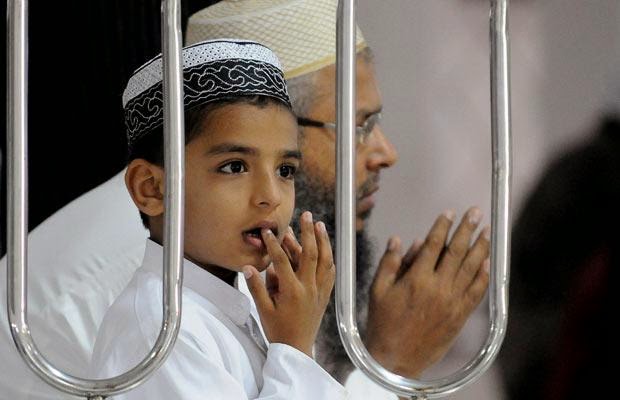 Sri Lanka: Tweaking the Muslims By Col R. Hariharan
Why Sri Lanka President Rajapaksa is tweaking the Muslim community, which by and large had been his loyal political partner?
Since 2012 the Buddhist fringe organization Bodu Bala Sena (BBS) has continued its attacks with impunity on individuals, institutions and businesses connected with Muslim cultural and religious practices and identity like places of worship, religious education, wearing of burkha, and Halal meat. Churches have also had their share of such hate campaigns.
In the latest infamous episode, last week BBS thugs disrupted a press conference organized by the Jathika Bala Sena (JBS) in Colombo at which the JBS founder General Secretary Watareka Vijitha Thera had threatened to expose the BBS leader Galagoda Aththe Gnanasara. The JBS General Secretary had been leading a campaign against BBS attacks since 2013.
The BBS was founded by two monks – Kirama Wimalajothi and Galagoda Aththe Gnanasaara after they broke away from the right wing monks party the Jathika Hela Urumaya (JHU) saying it was not militant enough in protecting Buddhism. So true to their sentiment the BBS has been militant since its start.
It has been thriving on the paranoia generated by the belief Sri Lanka is not a multi-religious country but a Sinhala Buddhist one. Its core theme appears to be that Sinhala Buddhist identity needs to be protected from the threat of Islam and Christianity. Islamic extremism which was never a reckonable threat in Sri Lanka has provided the BBS a convenient whipping horse thanks to Jihadi terrorism’s global record.
According to an Associated Press report of January 14, 2014 at BBS rallies monks claim Muslims are out to recruit children, marry Buddhist women and divide the country. BBS monks make many accusations about Christian pastors making suicide bomb kits, Muslims taking children away to train in Pakistan without offering supporting evidence. It quoted the BBS General Secretary Galagoda Aththe Gnanasara as saying “This is a Buddhist nation, so why are they trying to call it a multicultural society?Not everyone can live under the umbrella of a Buddhist culture.”
The BBS has been able to channelise the Sinhala Buddhist chauvinist passions by providing visible manifestations of Islamic and Christian identity as targets to vent their anger. These include mosques and churches, Sunday schools, religious gatherings, religious injunctions like halal meat slaughtering and certification, and wearing of burkha by women. Some of BBS concerns like the demand for abolishing birth control measures and advice to Sinhalas to stop using them to have five to six children to increase the Sinhala population might appear bizarre.  But at least in some sections of people such demands are finding support.
By doing some deft tight rope walking between the two communities, Muslims have economically prospered. Some sections of Sinhalas and Tamils feel the Muslim have taken advantage of the period of LTTE insurgency when the Tamil business community was under siege. So there could be a class angle to the support extended to the BBS.
The BBS tactics seem to be working as its strength is growing in direct proportion to the heat generated by its message and the number of protests it organises against Muslims and to a lesser extent on Christians. In a show of strength, more than 1300 Buddhist monks and 15,000 people attended a BBS rally in Colombo on February 17, 2013.
In the year 2013, barely a year after it was founded in 2012, BBS carried out approximately 241 attacks against Muslims while Christians fared slightly better with 61 instances of attacks on them according to a report compiled by the Sri Lanka Muslim Congress (SLMC).
The 50-page SLMC report titled “Religious violence in Sri Lanka ” was handed over to the UN High Commissioner for Human Rights Mrs Navanetham Pillay by none other than the Minister of Justice Rauf Hakeem, leader of the SLMC!
Mrs Navanetham Pillay, presumably drew upon the SLMC report  when she spoke at the last UNHRC session. In her oral report on Sri Lanka she spoke of the surge in incitement of hatred and violence against religious minorities, including attacks on churches and mosques, and lack of swift action against the perpetrators.
Apparently the success of BBS has unnerved the JHU which had considered itself as the sole protectors of Buddhism. It has added its penny’s worth to inciting anti-Muslim sentiments with its share of hate speeches. And other copy cat organizations of the BBS like the Ravana Balaya have come up to add to the mischief.
Many religious leaders including Buddhist prelates, civil society organisations and leaders of political and social spectrum have condemned the activities of BBS as a threat to national unity.  But at the same time, BBS’s theme and some of the demands have found support from some of the Island’s prestigious Buddhist religious heads like the Assigiriya Maha Nayake. Some educational institutions have banned the wearing of burkha by Muslim students.

It is difficult to imagine such acts of lawlessness taking place against a politically important minority community without the knowledge of the hands-on President Rajapaksa. Beyond appealing to the people for national unity, the President seems to have done little to ease the growing feeling of insecurity of Muslims and Christians.

One would have expected the President to take serious notice of BBS’ anti-Muslim activities particularly after the SLMC leader Rauf Hakeem had presented his report to the UNHRC. But Rajapaksa’s immediate response was to severely reprimand Rauf Hakeem for submitting such report to the UNHRC. Other partners of the UPFA coalition accused the Muslim minister for “washing dirty linen in the public.”
The official line trotted out to explain government inaction is ludicrous. In early 2014, Media Minister Keheliya Rambukwella called the anti-Muslim acts “minor agitations that are normal in any multicultural society.” According a report he said it was intended to encourage community members to work out their own problems adding “If things get more serious, we will take action…These kinds of things can ruin a nation, we are aware of that.”
The BBS is also involved in a slanging match with the All Ceylon Makkal Congress (ACMC) led by Minister for Industry and Commerce Rishad Bathiudeen after the BBS accused of Muslims of illegally settling in Wilpattu forests. The activities of BBS seem to have unnerved Bathiudeen who had been a long term loyalist of President Rajapaksa. The ACMC rejoinder said the apparent impunity with which BBS was acting raised questions whether it was running ‘a parallel government’ like the LTTE during its existence. The ACMC called for a ‘Commission of Inquiry’ to look into post-war incidents against minorities in general and Muslims in particular.
The Minister for National Languages and Social Integration, Vasudeva Nanayakara, who had been critical of BBS, in a recent interview to Ceylon Today said it should be proscribed by law, as it was disrupting religious harmony in the country. He said the dormant attitude adopted by the police, especially with regard to the BBS and its actions, was due to the political immunity that the organization enjoyed through the intervention of a high-ranking government official.
Significantly he said, “I can clearly say that the BBS is enjoying support from a high-ranking State official. That is why its members are behaving in such a manner. Even the police are lenient towards them owing to this. There is someone impeding the police from carrying out investigations against the BBS.”
The Defence Secretary Gotabaya Rajapaksa had shown some interest in the BBS. He was the Chief Guest at the opening of Meth Sevana, the Buddhist Leadership Academy started by the BBS on March 9, 2013.

According to a media report the Defence Secretary in his speech on the occasion had said that he decided to attend the event “after realising its timely importance…. these Buddhist clergy who are engaged in a nationally important task should not be feared or doubted by anyone.” According to the BBS, it was Gotabaya who ensured products displaying Halal certification were withdrawn from the market.

Whether he would support the BBS’ unsavoury activities, unless it is a part of a political agenda is the moot question.
The Muslim community in Sri Lanka is barely two million strong, forming just 10 percent of the island’s population. Most of them speak Tamil, and like Sri Lanka Tamils, have links with their brethren across the Palk Strait in Tamil Nadu. Muslims, like other Tamil speaking minority, are divided vertically and horizontally along sectarian, and class and occupational affinities.
Despite these limitations they have been great survivors – both politically and socially – during the difficult years when they had to survive the LTTE-led Tamil insurgency. In fact, they had developed the fine art of survival not only in the war between the government and the Tamil Tigers but between the two major parties – the United National Party (UNP) and the Sri Lanka Freedom Party (SLFP).
It is evident Muslim political partners of President Rajapaksa are feeling frustrated by the failure of the government to rein in BBS and curb its anti Muslim agenda. If unchecked, the President runs the risk of alienating the Muslim community. Together with the Tamils who already feel let down by Rajapaksa, the two communities make about 20 percent of the national vote share which is vital for success in the Presidential poll.
Can the President afford to alienate these votes with the hope of increasing his support among Southern Sinhalas?
Of course, continued government inaction in checking the BBS’ free run would also belie the government’s sincerity in attending to minority concerns. And it is not going to help Sri Lanka’s case at the UNHRC when it seriously takes up implementing the resolution.
So what is the larger political agenda at work in allowing space for Sinhala chauvinist activities of the BBS kind?  People of Sri Lanka would start demanding answer for this question from the President when the time comes.
(Col R Hariharan, a retired Military Intelligence officer, served with the Indian Peace Keeping Force in Sri Lanka as Head of Intelligence. He is associated with the Chennai Centre for China Studies and the South Asia Analysis Group. E-Mail: [email protected]   Blog: www.colhariharan.org)