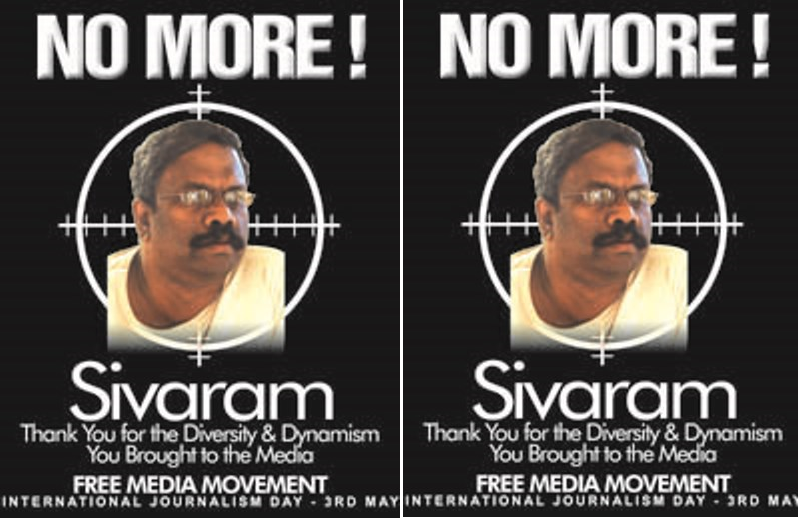 Image: FMM poster on well known Tamil journalist Sivaram who was abducted and killed in Colombo April 20o4, No proper investigation conducted yet.

COLOMBO: The Chief Minister of the Tamil-majority Northern Province of Sri Lanka, C.V.Wigneswaran, on Sunday charged that the Sri Lankan government is not investigating the killing or disappearance of Tamil journalists when it is investigating cases involving Sinhalese journalists.

Speaking at a function to give a “Lifetime Achievement” award to veteran Tamil journalist and editor-in- chief of Thinakkural V.Thanabalasingam at Karaveddi in Jaffna, Wigneswaran said that he had raised this issue when the Sri LankanMedia Minister, Gayantha Karunatilake, had visited Jaffna in March, but till date no action has been taken in this regard.

Wigneswaran pointed out that since the killing of BBC Tamil journalist Nimalarajan in Jaffna 16 years ago, 40 Sri Lankan journalists had been killed or had gone missing. Of these, only two were non-Tamils. The present Sri Lankan government is investigating two of the cases involving Sinhalese journalists (Lasantha Wickramatunge and Prageeth Eknaligoda) but there is no investigation into the cases of Tamil journalists.

“When the present leaders assumed power in 2015, they promised to investigate the killing and disappearance of journalists. But we now have little or no hope that these will be investigated,” Wigneswaran said.

The Chief Minister related this in the context of his broader contention that while the present Sirisena-Wickremesinghe regime is giving the impression that it is open to change on the Tamil question, it is “indirectly and in a clandestine manner” imposing its will on the Tamils. He cited the presence of over 100,000 army personnel in the Northern Province and asked how Tamils can move about freely and do their work in the presence of the military.

Referring to the on-going constitution-drafting process, he said disappointment is in store for the Tamils because the new draft will have to secure a two thirds majority in parliament and a majority in a referendum to boot.

According to Wigneswaran, the government is gagging the Tamils in many subtle ways so that a constitution which is to the liking of the powers-that-be is adopted. Among the techniques of intimidation are the branding of those who voice the legitimate grievances of the Tamils as “terrorists” or “extremists” thus creating in them “a fear death” which would force them to keep their mouths shut.

Turning to his party ,the Tamil National Alliance (TNA), Wigneswaran reminded its leaders that it had come to power on the basis a manifesto, which it cannot abandon under any circumstances. In a speech on Saturday at the launch of the new daily Kaalaikathir he said that he does not subscribe to the view that those in power can make compromises on their manifestos to suit exigencies.

“If such changes are necessary they should have the sanction of the people,” he stressed.

The reference was to the conflict between him and the TNA chief R.Sampanthan who, according to Tamil radicals, is too accommodative towards the Sirisena-Wickremesinghe government in an anxiety to ensure its survival in the face of the challenge from former President Mahinda Rajapaksa.
NIE