Why Gotabaya should go? Why now? – Ranga Jayasuriya 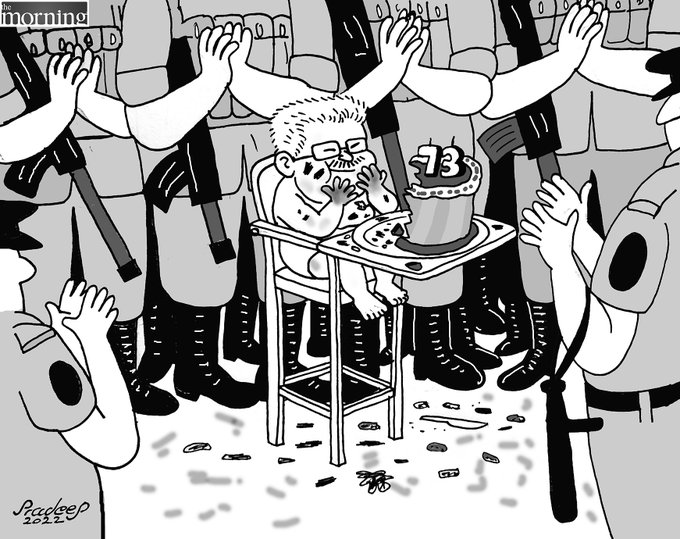 Long cherished pillars of the welfare state, free education and free healthcare are crumbling. Child malnutrition is rising. Public transport is at a standstill. Commuters are crushed to death riding in overloaded trains. The elderly are dying in fuel queues

Those who have followed this column might know that I have regularly expressed strong reservations about Gotabaya Rajapaksa during his previous stint as the secretary of defence and later his reincarnation as the president. Those concerns would be vindicated when the Sri Lankan judiciary is unshackled from routine political meddling and inherent bias toward the powers that be. Nonetheless, after the other Rajapaksas resigned and their dynastic project crumbled, I, for one, had rather been inclined to put up with Gotabaya Rajapaksa’s continuation in office for the time being for the sake of political stability.

“Once a new all-party government is formed, he should make him redundant, (at maximum limiting himself to negotiate a safe way out).”

Initially, it appeared as a reasonable trade-off in exchange for political instability. Now, I must admit I have been naïve. Gotabaya is not a source of political stability, but rather the stark opposite. He is the greatest source of political instability. Not only was he the primary catalyst who mothballed an otherwise manageable sovereign debt crisis into a calamity of unprecedented proportions. His continuation in the office against a myriad of calls for his departure is prolonging the crisis. He should leave the office for the sake of the country. To begin, he should announce a timeline for his departure, removing the greatest handicap for the formation of an all-party government.

Once a new all-party government is formed, he should make him redundant, (at maximum limiting himself to negotiate a safe way out). He should let the new government dig the country out of the hole, unencumbered by his presence. He should let Sri Lankans dream again, his government has been a long nightmare. If he and his ever-depleting number of sycophants cannot fathom why he should leave, here are a few reasons why his continuation would mean the ultimate demise of the nation.

No one wants him – save a few acolytes

First, for Sri Lanka to come out of the current economic misery, a trilogy of factors should converge: the Sri Lankan public, the political parties that would form the alternative government and the international community. None of them wants to deal with the incumbent president.

“The political opposition does not want meaningful cooperation with a government that Gotabaya calls shot.”

Sri Lankans, including many millions who voted for Gotabaya and SLPP, now view him as the source of their misery and want to see his back. He came to power in a race-baiting election campaign, now the hapless public is quarrelling in queues. Their frustration manifest in clashes with police, which have been responding with excessive force. Gotabaya is dragging the country towards another violent conflagration, which he might then use to cement his power.

The political opposition does not want meaningful cooperation with a government that Gotabaya calls shot. They view it as politically suicidal. Also, as the experience of Ranil Wickremesinghe reveals a political cohabitation with Gotabaya is also a meaningless and wasteful venture.

Intl. community more at ease with a govt without him

The international community, especially the democratic nations that always held reservations about Gotabaya Rajapaksa’s chequered history riddled with skeletons are less inclined to associate with his government. He snubbed the Japanese, Sri Lanka’s time-tested ally by cancelling the Japanese-funded Colombo Light rail project. He snubbed the Americans over the Millennium Challenge Cooperation (MCC) Grant. By snubbing the West, he and his acolytes believed China would open its chequebook. But, Chinese mandarins who might not have qualms about Rajapaksa’s authoritarian tendencies, or his brother’s kleptocracy, had already burnt their fingers funding similar irrational autocrats in Venezuela and Nicaragua. They gave him the boot. China after all is a mercantilist state, and the one with which, it would be the hardest to agree on bilateral debt restructuring. That would potentially poison the entire process.

“Sri Lanka has already outlived Indian generosity and is still asking for more. Any future assistance would come with many strings attached, which Gotabaya Rajapaksa, the pseudo patriot seems to be content with.”

The Middle Eastern countries, with deeper pockets, thanks to the rising energy prices, would have been more forthcoming with assistance had not been Gotabaya Rajapaksa regime’s track record of anti-Muslim dog whistling.

In the absence of friends, Gotabaya was left with India, which terms its assistance as a hallmark of ‘neighbourhood first’ policy — and in private perhaps, as the vindication of the ‘Indira doctrine’, India’s equivalent to the Monroe doctrine (that in times of contingency, the countries in India’s sphere of influence should seek India’s assistance first before reaching out to the others). However, Sri Lanka has already outlived Indian generosity and is still asking for more. Any future assistance would come with many strings attached, which Gotabaya Rajapaksa, the pseudo patriot seems to be content with.

President Rajapaksa knows his low international standing, hence the appointment of Ranil Wickremesinghe as his prime minister. But the international community knows better. They know that Mr. Wickremesinghe is a spent political force of dubious political utility. His contribution so far has been saving the Rajapaksas, much less the nation. The political instability and policy confusion that Gotabaya Rajapaksa creates, makes it harder for Sri Lanka to negotiate debt restructuring and intentional assistance. In the absence of progress in talks with the lenders and friendly nations, Sri Lanka slides further into the precipice. Gotabaya is perpetuating the misery of the people.

Second, he claims to have a political mandate. Alas, that was exhausted long ago. A president who single-handedly broke the back of the state, through his disastrous tax reforms, and then decimated the local agricultural sector, impoverishing 1.8 million farming families has neither moral right nor a political mandate to stay in power any longer. In any country where accountability matters, he should have been impeached, or in court for the gross mismanagement of the state affairs.

“Economic predictions are dire. World Bank forecasts the Sri Lankan economy to contract by 6.8 per cent. UNICEF warns ‘one of a kind crisis’ in food security.”

Third, the recent history of international politics would reveal that the countries do not cease to exist as viable political and economic entities just because they were confronted with a severe debt crisis. Ireland was there in the early 2000s, and Greece went through a similar economic squeezing later in the 2010s. Argentina defaults habitually. But those states have remained viable entities. Countries that crumbled beyond redemption – such as Venezuela now and Zimbabwe in the early 2000s- did so for a different reason: demagogic leaders who prioritized their political survival over the survival of the nation, and hang on to power at the demise of their states as anything but a functioning entity.

Gotabaya Rajapaksa is carrying Sri Lanka in that direction. Economic predictions are dire. World Bank forecasts the Sri Lankan economy to contract by 6.8 per cent. UNICEF warns ‘one of a kind crisis’ in food security. Rajapaksa already oversees a state that has ceased to function in many areas. Long cherished pillars of the welfare state, free education and free healthcare are crumbling. Child malnutrition is rising. Public transport is at a standstill. Commuters are crushed to death riding in overloaded trains. The elderly are dying in fuel queues. Gotabaya Rajapaksa who has no public support, nor international partners (or common-sense wisdom), cannot address the country’s acute economic crisis. Instead, he is perpetuating it.

Fourth, a political chokehold cannot be sustained without the use of brute force. Yesterday, on his birthday, President Rajapaksa mobilized hordes of military personnel to the vicinity of GotaGoGama. Like his counterparts in Venezuela and Nicaragua, Rajapaksa is switching to rule by force. Such a state quo also requires diverting a substantial part of the nation’s limited resources to the security apparatus of the state. That is in the making. See the cops who jumped the queues and pump full tanks in petrol stations.

As Rajapaksa resorts to militarization and brutalization of society, even the modest gains of ‘Aragalaya’ is evaporating. Premier Ranil Wickremesinghe is an accessory to this crackdown. The Sri Lankan public and the international community should not let them succeed.

Gotabaya Rajapaksa has brought the Sri Lankan nation to its knees. In any dispassionate analysis, the destruction he unleashed on the economy in two short years far outweighs the destruction that another race-baiting megalomaniac unleashed over three decades. That man is Veluppillai Prabakaran.

Gotabaya should go. To begin with, he should announce a timeline for his departure and invite the political opposition to form an all-party government. He should let them fix the broken state, negotiate international assistance and pass a constitutional amendment that restores the checks and balances of the government. The executive presidency should also go, the Rajapaksas have vindicated the danger of excessive powers vested with the office. A new constitution should follow. But, for the country to dream of a better future, Gotabaya should go.