Why does the world ignore Sri Lanka’s crimes? 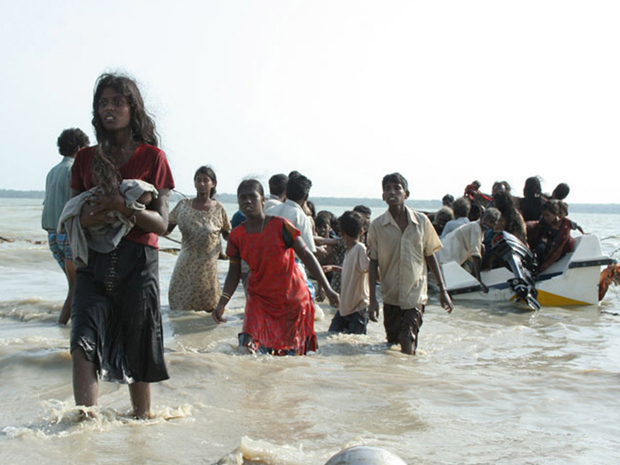 Elizabeth Haq:
No one knows how many thousands of people died in Sri Lanka in 2009, the year that marked the end of a decades-long struggle between the Sri Lankan government and the secessionist Liberation Tigers of Tamil Eelam (known more commonly as the Tamil Tigers). Certainly, it was one of the bloodier conflicts that the world has witnessed in recent decades. But no one outside Sri Lanka really seems to care.

After years of bitter conflict between the two sides, one that witnessed the inaugural use of the suicide belt in the 1980s, the Sri Lankan government launched a no-holds-barred offensive against the Tigers in the latter years of the last decade, resulting in enormous carnage. Both sides committed serious war crimes and crimes against humanity. But the United Nations did little to help. (A recently leaked internal inquiry report commission by the UN Secretary-General produced an admittance of the UN’s “grave failure” during the conflict.) Only with the death of the Tigers’ leader, Velupillai Prabhakaran, was the conflict finally brought to a close.

In her new book, Still Counting the Dead, former BBC correspondent Frances Harrison details the events that occurred in Sri Lanka during the final few months of civil war. She kicks off the collection of heartbreaking survivors’ stories with a chapter titled “The War the United Nations Lost.”

Harrison maintains that in a post-9/11 world, the Sri Lankan government found it easy to rebrand its struggle to eradicate the Tigers as just another extension of the war on terror; not the protracted, deeply entrenched ethnic conflict that it truly was. Thus, the Sri Lankan army was able to secure the unflappable support of UN member states including the United States, Canada, China, India and Israel. She cites China as the largest arms seller to Sri Lanka by 2008.

An earlier UN report cited an estimated 40,000 dead during the final stage of the conflict, when the Sri Lankan government was laying siege to the small sliver of land still held by the Tigers. But the true number may well have been closer to 70,000.

In Still Counting the Dead, Harrison compiles accounts from 10 Tamil survivors. If history is written by winners, the author sought out the ones who she believed lost the most.

She uses chapter titles such as The Priest, The Nun, and The Rebel Mother; punctuating the highly emotive prose with bullet-point war statistics meant to validate their stories. Her rendering of these tales is elegant and grim — but also makes for difficult reading. Harrowing accounts of dead infants hanging from trees, reports of rape at government checkpoints, and speculations of attacks on hospitals in prescribed “no fire” zones are commonplace throughout the book.

Ultimately though, the reader is left with a collection of tales of horror that likely will have little consequence on a global level — because few global actors have taken much interest in this area of the world.

The book is not one-sided. While highlighting the horrific methods employed by the Sri Lankan military, she also describes the Tigers’ recruitment of child soldiers and their use of extortion and threats on the Tamil diaspora in an effort to raise funds.

Harrison participated in an interview for TamilNet, a pro-Tiger media outlet, in which she consistently refused to label the final few months of the conflict as a genocide of the northeastern Tamils, despite the blatant coaxing of the pro-Tiger anchor to do so. “There are huge implications. Academics and lawyers should debate it,” she recently commented.

Aparna Sundar, a professor in the Department of Politics and Public Administration at Ryerson University, is less reluctant about that designation: “If genocide is the intentional of wiping out of a community, directly or through long-term means, was this genocide? I would say yes.”

Sundar also is appalled at the corruption and inefficiency of the Sri Lankan government, which has had something of a free hand since the war ended: “It’s now not just a Tamil or a Sinhalese thing, it’s a suspension of basic civil rights. Nepotism is rampant, elections are unfair. There are no grounds to test the government. It’s repressive and quite brutal. The general population is beginning to recognize how deeply rotten the system is.”

In a world that has raised the hue and cry about Palestinians and Syrians, it seems odd that there is so little concern about the even greater carnage in Sri Lanka. It is a disparity that reflects poorly on the state of the West’s conscience.

Prime Minister Stephen Harper’s threat to boycott next year’s Commonwealth summit in Sri Lanka is a start, but it’s essential that the rest of the world open its eyes to the country’s bloody deeds as well.
photo: SRI LANKAN ARMY/AFP/Getty Images
National Post

Elizabeth Haq is a Toronto writer.