Why do asylum boats keep coming from Sri Lanka? 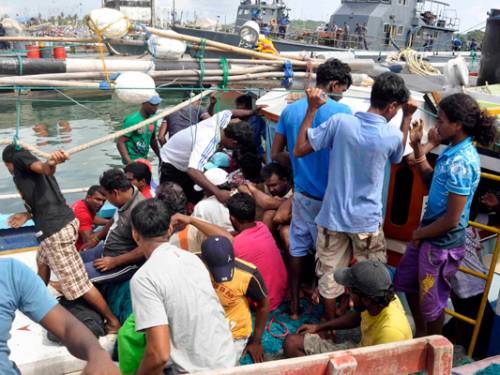 Why do the asylum boats keep coming from Sri Lanka?
So far this year, the number of boat arrivals from Sri Lanka is over six-thousand – almost 30 times bigger than last year’s figure.
It’s raised questions about the reasons for the recent jump.

It’s been more than three-and-a-half years since the end of the civil war in Sri Lanka between government forces and Tamil separatist rebels.

Yet 2012 has seen an unprecedented rise in the number of Sri Lankans arriving in Australia by boat to seek asylum.

Figures from the Department of Immigration show well over six-thousand Sri Lankans have arrived by boat so far this year – with Sri Lankans comprising by far the biggest source country of asylum seekers.

By comparison, there have been close to four-thousand (3850) Afghans, about two-and-a-half thousand (2499) Iranians and just over one thousand (1099) Pakistanis.

Senior Research Fellow for the Human Protection Hub at Griffith University, Sara Davies says it is common for the number of asylum seekers from a country to rise several years after a conflict ends.

“And it should be remembered too that there were hundreds of thousands of people forcibly displaced and sent to internment camps, and we still don’t have precise numbers about how many were sent to these internment camps. And it is not impossible that these groups are slowly making their way down to coastal lines, to seek a passage, and it takes a lot of time.”

Sara Davies says the number of people claiming asylum from Sri Lanka could be influenced by past Australian government policies – or stories told about them.

“There is no doubt that one of the things that might be informing the dramatic increase is the fact that a number of Sri Lankans were (previously) recognised as refugees.

“They’ve had their asylum seeking claims heard and processed, and people smugglers are reporting these positive news stories, if you like, back to the community, and they’re saying that you have the chance to seek and gain passage.
“This is not uncommon. I mean, this has happened from World War One, World War Two, when populations are fleeing and they find out that there’s a possibility of being received in a neighbouring country, no matter the distance, this is what they will do.
They will try to get to the country that provides them asylum.”

One Australian Tamil community group says it believes the dramatic increase in the number of people seeking asylum is because some parts of the population in Sri Lanka still feel unsafe.

Bala Vigneswaran is a spokesman for the Australian Tamil Congress.

“The war means sometimes it’s physical – the bombs are falling, the shells are flying and all sorts of things and the blood and death. Yes, that particular physical war is over. But all the factors that caused the war continue.”
“People disappear, the militarisation of the northern east of Sri Lanka continues, and people are still in trouble. They’re not getting the dividend of peace. People were very hopeful things would be better, but it doesn’t seem to happen. So people are kind of disappointed, they are really leaving to save their lives.”

Basil Fernando from the Hong Kong-based Asian Human Rights Commission, says the end of the civil war in Sri Lanka does not mean that human rights are now being respected.

In fact, he says the situation has worsened.

“The situation in Sri Lanka in many ways, is a very oppressive situation. In the past, the main problem was regarding the civil war. Now that situation doesn’t exist after 2009. But over the country, the respect for civil rights have degenerated quite a lot.”

The Sri Lankan government argues that there’s no reason for any of its nationals to now be seeking asylum in other countries.

Government leaders say if there was anyone in genuine fear of persecution, they could take a far shorter and safer trip, for example, to neighbouring India.

But Basil Fernando from the Asian Human Rights Commission says many Sri Lankans have good reasons not to choose not to seek asylum in nearby countries, such as India.

“(The) Indian government doesn’t provide any kind of support for their existence. So other places of course and even worse. So none of the Asian countries have a strong policy or protection for refugees. That is one of the reasons people go for other places. The system of refugee protection, the respect for the UN convention on Refugees is very much less in many ways and actually it doesn’t exist.”

The Gillard government has sought to dissuade asylum seekers from Sri Lanka by stepping up co-operation with the government in Colombo.

But the Deputy Director of the Geneva Centre for Security Policy Khalid Koser says Australian policy changes may not necessarily have any effect on reducing the number of people seeking asylum by boat.

So the idea that because the Australian government says something asylum seekers will believe it I think is the first question. The second this is that, and of course not all asylum seekers are fleeing persecution and some of them are clearly economic migrants.”

“But if you are fleeing persecution, if you are fleeing conflict, then frankly there’s not much Australia can do that would make my life worse than it may be in Afghanistan or Sri Lanka or other places I’m coming from. So even if asylum seekers know that there are tough policies, even if they know they may be detained, that’s not going to be enough to stop them trying to get out of harms way and come to a place where they think they will be safer.”
SBS