Who planted the bombs in Chennai train ? The Colombo Connection 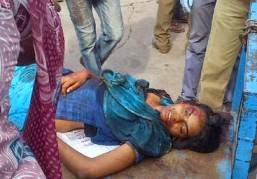 Col R. Hariharan
Two low-intensity improvised explosive devices (IED) exploded in two adjacent sleeper coaches of the Bangalore – Guwahati tri-weekly super fast express just as the train streamed into the Chennai Central station around 7.15 AM on May 1.
One young woman was killed and 14 others were wounded in the explosions. The city waking up to May Day holiday was stunned. And national media fed on increasingly stale diet of election news went hammer and tongs to dissect it.
But the question, who planted the bombs in the train, still remains unanswered.
The Chennai police (CB CID) assisted by a NSG team is investigating the blasts. Preliminary investigation has revealed that ammonium nitrate, favoured by terrorists because it is commonly available as a chemical fertiliser was probably used with a timer device in the IEDs. The media called the IEDs a professional job, leaving no doubt it was a terrorist handiwork. However, so far no terrorist organisation has laid claim to the heinous act.
As the train started in Bangalore, police are also looking for leads at their end. The police both at Chennai and Bangalore are also examining CCTV footages of the day recorded in the two stations for possible clues.
The train was running 45 minutes late and that probably saved more lives and damage to the train. Had it been running on time the train would have neared Nellore where Narendra Modi, the BJP’s prime ministerial aspirant, was addressing an election rally on that day! Already a security alert has been issued to Southern States regarding possible terrorist attack on the Gujarat Chief Minister during his electioneering in South India. According to railway sources, security arrangements in the two stations in Chennai were tightened after the alert was received.
The train was headed for Guwahati, capital of not only Assam state but Northeast militancy as well. The train would have passed through parts of Andhra Pradesh and Orissa that were hunting grounds of Maoists and other Left Wing Extremist (LWE) groups. These complications have generated a lot of speculations about the terrorist body responsible for planting the bombs.
Despite some spectacular ambushes of paramilitary forces by Maoists, during the run up to the general elections their activities have been substantively restricted thanks to the tight security arrangements beefed up by additional forces. Same is the case in the Northeast  where general elections have been conducted peacefully. Moreover, North-eastern militant groups which are ethno-centric rarely operate outside their beat. Considering this, it is reasonable to remove both the LWE and Northeast insurgents from the list of suspected perpetrators. And that leaves only Jihadi terrorist groups as the suspects.
In this context, the arrest of a Sri Lankan national Mohammed Zakir Hussain in Chennai in a joint operation by Central intelligence and state police two days before the blast is of special interest. According to media reports, Hussain is said to have confessed to the police of working for Pakistani intelligence. He was on an assignment to recruit people for terrorist activities in Southern states and circulate fake Indian currency. Based on the information provided by him the Tamil Nadu Q Branch Police have arrested two of his associates suspected of working for the Pakistan ISI.
The report quoted to sources to say that Hussain had confessed he was tasked by Amir Zubair Siddiqui, Counsellor (Visa) at the Pakistan High Commission in Colombo, to gather information on vital installations in Tamil Nadu and Karnataka. There was another Pakistani official named Boss alias Shah involved in this operation. Zakir said he had met the Pakistani officials many times in the past one year and sent photographs and maps of US Consulate in Chennai and Israel Consulate in Bangalore. He visited Chennai six times in the past one year on fake passports. Sometimes he came here as a textile and pharma merchant.  It also said that Hussain was arrested by Singapore police for spying; he had spent three years in a prison there. He was also detained in Bangkok, the report added.
The Hindu quoted police sources to say that Hussain was also asked to prepare fake passports to facilitate the arrival of two Pakistani nationals in India.
Amir Zubair Siddiqui was also named as the handler in the case of another suspect Thamim Ansari of Adiramapattinam in Thanjavur district apprehended in September 2012 when he was heading for the Tiruchi airport to take a flight to Colombo. Two DVDs containing visuals of the Army Para-Gliding training and a parade of the Army Signal Corps were seized from him. According to media reports, police claimed that he had admitted to having video-graphed vital installations, including the Nagapattinam Port and the Madras Regimental Centre in Wellington. In his confession Ansari said he was instructed by at the Pakistan High Commission in Sri Lanka, to take videos of sensitive defence installations in India.

These would indicate that Colombo continues to be the cockpit of Pakistan intelligence operations targeted against India. With convenient flights to all major cities of India and huge tourist and business traffic to and from Sri Lanka and India and comparatively laid back attitude to security prevailing in Southern states, it makes sense for Pakistan intelligence to use Colombo to sneak into India.

Pakistan intelligence’s Colombo connections are nothing new. As early as 2003, terrorism expert the late B Raman had written that since 2001 Jihadi terrorist groups of the Al Qaeda-kind had been “paying more attention to other areas such as the Eastern province of Sri Lanka, which has a pocket of Muslim concentration” as well as Indonesia, Malaysia and Singapore. Among such groups he rated the Lashkar-e-Tayyaba (LeT) as one organisation which had “a definite jihadi agenda in South India.” It was constantly looking for opportunities to build a presence and capability for that purpose, he averred.
During the last decade or so Pakistan had been using Colombo as a base to launch intelligence operations to gather information on vulnerable targets in South India. On June 18, 2004 the late B. Raman commented upon a news item from the Colombo daily ‘The Island’ regarding Sri Lanka’s concurrence to the appointment of Col Bashir Wali (retd.) as Pakistan High Commissioner to Sri Lanka. According to Raman, it would be Col Wali’s second posting to Colombo. He had served there in the 90s as the head of the Pakistani intelligence set up in the Mission.
But the pernicious part was that during Wali’s first tenure in Colombo that Al Ummah, the terrorist organisation of Tamil Nadu expanded its activities in Tamil Nadu and Kerala. He had also used his close connections with the Tablighi Jamaat (TJ) which had been helping to recruit cadres abroad for a number of Jihadi terror groups like Lashkar-e-Tayyaba (LeT). Probably this is what resulted in sending a number of Tamil Muslims from Sri Lanka’s Eastern Province to Karachi to study in the Binori madrasa on scholarships provided by the TJ Mufti Nizamuddin Shamzai who was considered god father of the Taliban, Al Qaeda and the Pakistani jihadi organisations. Later Col Wali moved to the Pak High Commission in London. And it was during his tenure there that the LeT set up its secret cells in UK to recruit volunteers for Jihadi terrorist operations from amongst the Muslim community there.  This ultimately led to the ban of LeT in UK.
Raman had written that while in Pakistan, Col. Wali used to attend regularly the annual conventions of the LeT and assisted terrorists in Punjab and J&K. “The training of the terrorists from Mumbai, responsible for the train blasts in March1993, was allegedly organised by Col Wali on behalf of the ISI in association with Dawood Ibrahim, the leader of the criminal mafia and now a designated as an international terrorist because of his linkages with Al Qaeda and the LeT.
So it would be reasonable to conclude that there could be a Pakistan intelligence link based in Colombo to the Chennai train blasts. Whether the Indian Mujahideen or any other module of Pakistan intelligence was involved in it or not is not clear. Perhaps we will get to know it in due course.
(Col. R Hariharan, a retired Military Intelligence specialist on South Asia, served as the head of intelligence of the Indian Peace Keeping Force in Sri Lanka 1987-90.He is associated with the South Asia Analysis Group and the Chennai Centre for China Studies.