Who burnt houses of returning Muslim IDPs in Mannar? 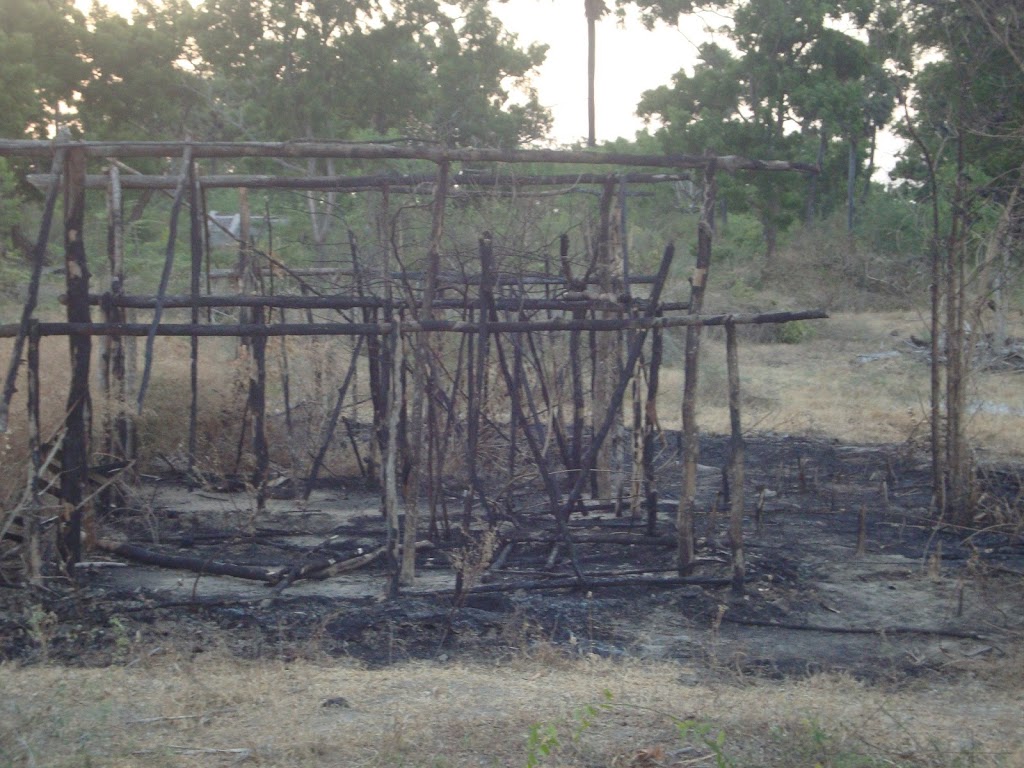 “We can see how the people are suffering but who are we to tell? Nothing can be done. Who can fight against the Government? The news on the ground is that the Defence Ministry is trying to secure 1500 acres to build a hotel in this area. This is the main reason they don’t want these people to return to their homes.
As we all know what the Defence Ministry wants, it usually gets. Who can stop them,” were the words of a rather unusual source – a Police officer, who was stationed at Marichikattu in the Musali Division of the Mannar district, where 7 huts belonging to Muslims were allegedly burnt on the 3rd of September, 2012.

It is not clear who was responsible for burning these houses – but several Muslim villagers said they suspect the Navy, and that they could be trying to intimidate the villagers from returning to this area.

Click the images above for high resolution versions.
“On Monday the 3rd evening at around 7-7.30pm, I got a call from one of my relatives in the area saying that they had seen a bright light in the area near my home. So I immediately went towards the area they described, but was stopped by the Navy and not allowed to go beyond a certain point. Villagers from the other side too were stopped at a point and not allowed to come near the scene until after the fire was put out. There were three tractors, one water-bowser and one Buffel (mine protected Armoured Personnel Carriers (APC)) which were providing water to put the fire out. From a distance I could see some Navy officers with buckets putting out the fire and then removing the posts holding up the huts and the rafters of some of the un-burnt cadjan huts on the east of the main road. In the light of the tractors I saw that the utensils and goods belonging to the people that were kept inside the huts in the morning, weren’t there now,” said a village leader from Marichikattu.

There are about 250 Muslim families that live in the larger area of Marakarathivu, within which Marichikattu is located. Luckily there were no people inside the huts as every night people take shelter in a large building near the Marakarathivu junction, in fear of the many elephants that roam the area. Each morning the villagers return to their homes and get about their daily work. “These are our traditional deeded lands, so we have the right to reside here. In Puttalam where we’ve lived for the past 20 years, schools are not accepting admissions of our children for next year, so we have to return to our hometown,” explained another Muslim villager. (These Muslim people had been evicted from their village by the LTTE in 1990).

Someone from the village had called some politicians, but due to local election work, they hadn’t come, but had sent Police to the scene instead. Once the Police arrived on the scene, the villagers too had entered the area where the fire had broken out, along with the Police. The following day, the villagers had made a complaint regarding the incident at the Silavathurai Police Station. Later that day, a high-up in the Police had visited the village and deployed 25 Police personnel to the area to protect the people. On Wednesday, an Army Brigadier too had come to inspect the area and told the people not to protest or picket, that he would meet with the relevant parties and come to a favourable settlement soon. “We are yet to hear back from him,” said a village leader.

On the 6th of September, the Army, Navy, local Government officials and the villagers had all met to discuss the issue. The Navy official had walked in late to the meeting and asked “who are the people who want to return to this village?’ “We feel the Navy is not happy about us being offered a housing scheme project as they don’t want us to have permanent houses here, particularly in the contentious 10 acre plot of land directly in front of the Navy Camp. The SLN has approx. 1500 acres of our land, but they still want more,” laments another villager. Later that day, the Divisional Secretary came and collected details from the people of Marichikattu. They have also been told that following the local Government elections, a meeting will be held with the relevant Ministers, the Government Agent, the Assistant Government Agent, the Army, Navy, Police and Wild Life Department, to settle this matter once and for all. However, they are yet to be notified of the exact date.

Since their return in 2010, 1200 Muslim families have been registered in the three neighbouring villages of Marichchikattu, Karadikuli and Paalakuli. Of those registered, 300 families have settled in these three villages thus far, with many still shuttling between Puttalam and here. According to some villagers we met, UN-HABITAT has constructed 150 houses, 75 in Karadikuli and 75 in Paalakuli. These houses are all being inhabited now, and there are also two functioning schools in these two villages.

With regards to the displaced Tamils who are also looking to return to Mullikulam, the adjoining village, the Muslim leaders say “we are like brothers and sisters. It’s only that we won’t give our children in marriage to non-Muslims. We wholeheartedly support their struggle to return to their homes, as we remember before 1990, we used to help our neighbouring Tamil brothers to fish, and they would give us free fish in return. Our two communities always maintained good ties with each other, so we are more than happy to struggle together to reclaim our land.”

The Tamil community’s reaction to the incident
“We feel for our Muslim neighbours, but they have at least been permitted to return to their own lands, we are still waiting. And as we have faced a lot of difficulty to come this far, we can’t afford to risk it all by taking sides at the moment. So we’d rather not say anything further on the issue,” said a Tamil villager from the Malankaadu temporary resettlement camp.

On the 3rd of September when they were awaiting the Navy water bowser which was later than usual to make their daily delivery to the camp, the camp Coordinator had called the Navy to find out the cause for the delay. The Navy had told them that some Muslim people houses had been set on fire in Maruchchikattu, and that their delivery of water would be delayed. It was only then that they had found out that there were troubles in the neighbouring Muslim village. When the Coordinator called the Navy again later that day, he had said that they were wearing helmets as they were being pelted with stones and therefore, the delivery would have to get delayed further. It was only at around 6pm that day that the Navy had arrived at the Camp, with Police escort, to deliver their water.
Clarifying this with the Marichchikattu Muslim community though, they said that nobody had thrown any rocks at the Navy.
GV