Where is the national education policy every govt. since 1990 promised? 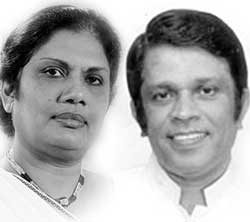 Every government that we have had since the Youth Commission of 1990 has acknowledged the need for us to have a National Education Policy which does not change with every change of government or administration. Despite setting up the machinery for the purpose under the National Education Commission Act of 1991, we were not able to prepare a comprehensive policy document that could form the basis for such a policy even until the end of 1996. In sheer desperation, President Chandrika Bandaranaike Kumaratunga appointed a Task Force in December 1996 under the chairmanship of the then Education Minister, Richard Pathirana, to prepare a set of proposals which her government could start implementing immediately to be able to meet challenges of the day. This the Task Force delivered within the brief period of three months given to it.
The President lost no time in declaring 1997 as the Year of Education, and gave the green light to start implementing the new proposals. The Task Force reforms were, accordingly, implemented during the years that followed, and were often described as National Education Policy though they did not constitute a comprehensive set of proposals or placed before Parliament or the public for debate and discussion.

From year 2000 onwards, fresh reforms which were not among the Task Force Proposals were introduced one after another, and the concept of a National Education Policy as envisaged by the Youth Commission and provided for under the National Education Commission Act of 1991 had become a mere slogan!

Although a re-constituted National Education Commission made an attempt in 2002/3 to give fresh life to the idea by preparing a framework which could provide the basis for such a policy, it got caught up in the whirlwind of partisan politics and was swept away. The flow of reforms continued, however, in a distinctly ad hoc manner!

It was in this context that the Mahinda Rajapakse Presidency began in December 2005. The new cabinet sworn in by him saw the return of Mr. Susil Premajayantha, who had held the Education portfolio for a brief period under President CBK in 2000, as the new Minister. Sometime in early 2007, he appointed a Committee under the chairmanship of a former Director-General of the National Institute of Education (Dr. G.B.Gunawardena) to prepare a ‘New National Education Act’ giving it, if I recall correctly, a very brief period of three or four months for the job. This would, obviously, not have been possible without first agreeing on the policies that needed to be reflected in such a legal enactment.

The Committee appeared to have brought this to the attention of the Minister, identified seven broad areas to be covered under the proposed Act, and called for public representations for its consideration on a given format. On the basis of the representations received, it prepared a set of draft proposals, discussed them at a convention of selected persons from amongst those who had made representations, and submitted a report to the Minister sometime in 2009 (date not indicated in the document) under the title ‘New Education Act for General Education Sri Lanka – Context, Issues and Proposals, Final Report’. (It is worth noting that the Chairman and Vice-chairman of the Presidential Commission appointed under the National Education Commission Act of 1991 for the purpose of policy formulation, functioned as mere members of this ad hoc Committee appointed by the Minister!)

The General Elections held in April 2010, resulted in a fresh Cabinet being sworn in with Mr. Bandula Gunawardena as the Minister of Education – probably the sixth Ministerial change in Education since the year 2000. The new Minister also gave what by now had become an almost ritualistic pledge that every Minister of Education (just like every government) makes on assumption of office.

In a wide-ranging interview given to Lankadeepa on June 13, 2010, he said that his first priority would be to prepare a national education policy that will not change with every change of government or Minister, and ensure that it is brought into effect under a new National Education Act.

The Minister went on to add that a Parliamentary Committee on Education Reforms would be appointed to help in finalizing the proposals and that these proposals would be placed before the public for debate and discussion to enable a final consensus to be reached. He said that all this would be completed within a period of three months and a report placed before Parliament, based on which a new Education Act will be enacted before end of the year – and that meant the year 2010. He did not stop with that, and assured the public that thereafter he would be able to preside over the education system and guide it along in the right direction!

None of these have happened except that a Parliamentary Advisory Committee had been appointed as stated above, and they have met many a time. In the meantime, one ad hoc decision after another is being taken, and announced to the public through the media and at public meetings making a bad situation worse, and causing confusion in the public mind. It is time that the public are made aware as to when the promised National Education Policy is likely to see the light of day. Let us not forget that the year 2013 is about to begin, and the little ones who were born in 1991 will soon be over 21 years of age!

[The writer is a former Secretary, Ministry of Education and Consultant, UNESCO/ UNDP/ ESCAP]
IS