Where in the Parliamentary democracy do you have this kind of Prime Minister? A single MP, from his party! – M. A. Sumanthiran. MP 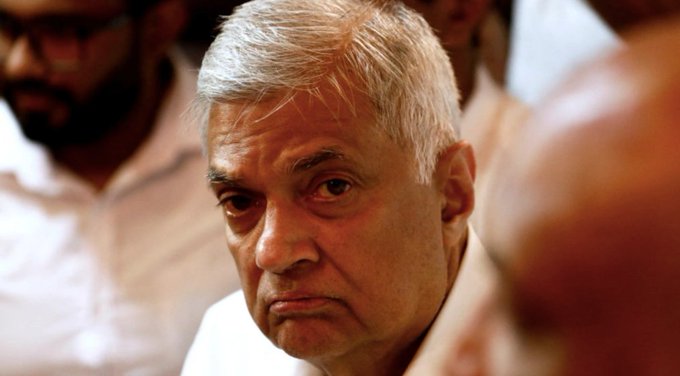 The country is looking to the parliament today for answers to an unprecedented economic crisis that the country is facing. Each time this parliament meets people have had expectations that there would be some change, some forward movement to resolve this crisis.

And the people are disappointed because, this was a parliament when it was constituted or soon thereafter had two third ‘s support for the government, and with that 2/3rd support that they gathered together, they brought an amendment to the constitution, the 20th amendment, and strengthened the hands of the President, which was by the 19th Amendment taken back to Parliament somewhat, that was reversed.

And the President’s own election manifesto in 2019, the “Vistas of Prosperity and splendor”… I urge everyone in this country to read that manifesto. You will die laughing before you actually die of hunger, if you read that manifesto and compare it to the state that the country is in today.

In the manifesto, before I deal with other matters; the one very specific proposal that he made, is at page 36 and 37 in the English version of the manifesto, where at page 37, he very specifically says “income tax will be reduced, economic service charge and withholding tax will be scrapped. A simple value added tax of 8 % will be introduced, replacing both the current VAT of 15 % and the Nation building tax of 2 %, payee tax will be scrapped and personal income tax will be subject to a ceiling of 15 %. 5-year moratorium will be granted on taxes payable by agriculturist and small and medium enterprises” and so on.

Huge tax reliefs announced even in his election manifesto – it was an election promise. I want to table those two pages, titled chapter 5 “People Centric economy” page 36 and 37. I am tabling it.

“You can’t keep the wrong-doer, the one who is mostly responsible in that chair and deal with the crisis. How can he do that?”

On the 30th of October 2019 he tweeted, it’s still there in Twitter, and I am going to table Mangala Samaraweera’s tweet made on the 30th of October 2019. This is what he said, “Gota’s tax plan wants to set Sri Lanka on an express train to bankruptcy, default and a Greek styled debt crisis. That change alone equivalent to heath, defense or pensions budgets. Certainly doesn’t need advice for PR agencies conjured business communities”. 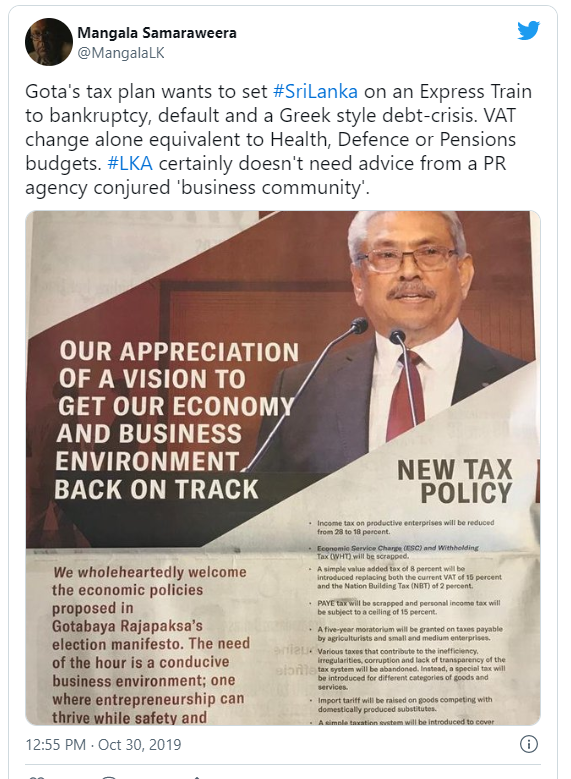 I am tabling Hon. Magala Samaraweera’s tweet on 30th October 2019 also to be included in the Hansard.

So, one cannot say that there were no warnings. The Finance Minister of the country at that time said this. Hon. Prime minister now wants to set up a parliamentary budget office. During the last Parliament we had that draft and all of that was set up but it was never presented to Parliament. Recently he asked me for the draft and I have sent it to him, and hope that will be done.

We need a strong leader to invoke that sentiment amongst the voters, an Easter Sunday attacks was also carried out earlier, and voters were duped. And this tax cuts were actually implemented in December 2019 and was the single most reason why we are in this predicament today. I am not saying that’s the only reason, but that was the trigger, because it was only after that, beginning April 2020 that our ratings started falling.

When the rating started falling, the Central bank under the Monetary law gave confidential reports and I believe, it cautioned the government, that we will not be able to borrow anymore and by July/August 2020, we were shut out of International Financial markets. And that’s it! That’s what happened.

So therefore the President must definitely step down, there might be some interim relief that he has got by Hon. Ranil Wickramasinghe running and taking the position of Prime Minister.

Where in the Parliamentary democracy do you have this kind of Prime Minister? A single MP. From his party only one person, that’s to give relief to the government that’s in sixes and sevens.

The President has lost his mandate, the President is the wrong-doer who caused this huge economic calamity, so he must move, he must step down. Or he must be removed.

The Parliament also has lost its mandate. 2/3rds you had; what do you have now? Groups within the government, so and so’s group, the other person’s group, another person’s group or calling themselves independent MPs. Parliament has lost its legitimacy, parliament has lost its mandate. There must be an overhaul of this system. But before that, parliament also needs to be dissolved, it is anyway dissolved into independents. It has been dissolved, I mean in actual fact it is dissolved. So at least formally you must dissolve it now.

So I say to those out there who think that this is merely playing politics: No! it is not. Until you set this right, until you set this right you are not going to even begin to address the economic issue. Every institution has told this country “you know there must be Political stability” how do you have Political stability with this parliament of independent MPs? you have no stability at all.

And every day of delay, every day of delay in establishing stability costs the country several million Dollars. Every day’s delay. So it must be fixed fast  We are part of a problem, we must say “Yes, we’ll dissolve ourselves”, pass a resolution and request the President to dissolve Parliament. One of the biggest promises given by the President himself in the last address to the Nation, he said so, and by the Prime Minister very categorically, stated, that they will do 2 things, that they will bring back the 19th amendment, the 20th amendment you brought with such fan fare, the former minister of justice is here, he moved that bill and suddenly he said “no, no, 20th is bad, now we will change it, we will abandon it, we’ll repeal it, we’ll bring back the 19th. And then we’ll start the process, of abolishing executive presidency itself.” Both the President and the prime minister within the last two weeks have given the country that assurance. But where are you now?

You can’t even bring back the 19th amendment. Some draft was produced, discussed with us, members of the opposition, the party leaders, with all kinds of dilution. We said alright, still do it, do it! what happened on Monday at the Cabinet meeting? Nothing has come out, you are unable to even give effect to that promise. A highly watered down version of bringing back the –  you call it the 21st, 21st is what Hon. Ranjith Maddumabandara has presented to Parliament, that is a substantial one.

Then at least give support to that to be passed if you are serious about your promises. If you are unable to finalize the draft, if you have no unanimity in the cabinet to do that. So cabinet has failed, this Parliament is unable to do anything because there is no one side that can support any reform. If we are to move from this, this relief budget will be most welcomed but we will have to look at it to see what there is in it. We are waiting to see what your draft amendment to the constitution is. We will have to wait for it. But the longer we wait, the more serious the economic crisis is, and the ones who are affected by that are the most ordinary citizens and the poorest of this country and we don’t seem to think about them or care about them.